He’s okay, but his poor Mercedes-Benz C-Class will never be the same. 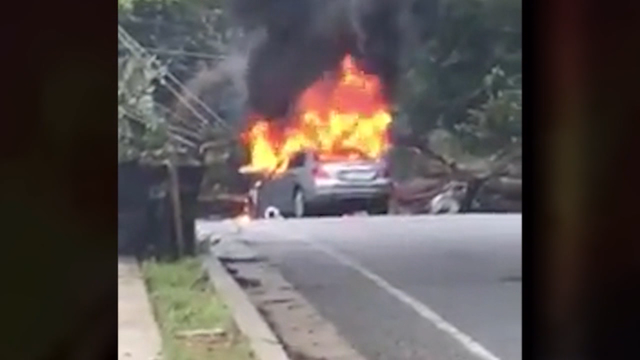 Atlanta realtor Sam Lenaeus experienced both extreme misfortune and extreme luck in just a few seconds. He was driving to a funeral on Wednesday morning when a tree fell on the hood of his Mercedes-Benz C-Class bringing live power lines along with it, according to Fox 5 Atlanta. The car quickly burst into flames, but Lenaeus acted fast and managed to escape the car unharmed before the potentially fatal explosion.

Lenaeus then stood by and watched his car explode, burn, and melt while he waited for the fire department to arrive. He said he had his insurance claim filed before the fire department even got there. When they did arrive, they had to wait for the power to the power lines to be shut off before doing anything. Not that the delay mattered much, there was no saving this poor Mercedes.

“It wasn’t my day,” Lenaeus told Fox 5 Atlanta in a huge understatement. “It could have been one second different. It would have been a different story.” He considered the danger of electrocution, but correctly figured it was worth the risk. "I thought I'd rather electrocute than burn so if it started burning I would have gone and tries to get out," said Lenaeus.

So, remember; when given the choice of burning alive in your car or getting out and risking electrocution, the latter is the better choice. Here is Lenaeus' own account of what happened from Fox 5 Atlanta. He also took a video of his car exploding which you can see here.