The Most Comprehensive Tour of the New Airstream 19

You know you want to peek inside. 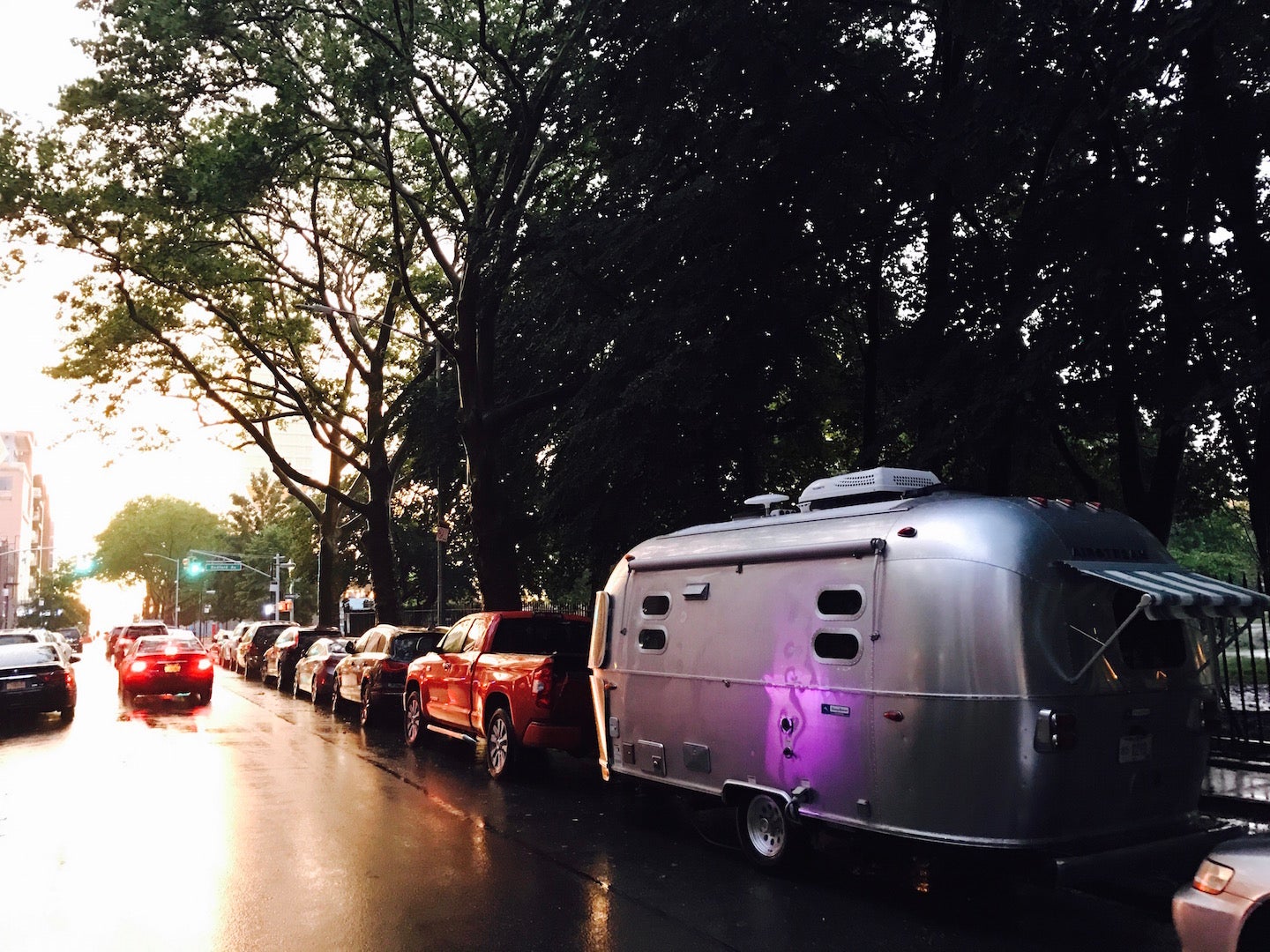 The long holiday weekend was a parade of park-going gawkers wondering what the hell the inside of an Airstream looks like.

I let some people in—when I wasn't cooking lobsters for me and my imaginary friend—but after a brief rainstorm had to turn people away. Tracking mud onto the floor drives Camperman crazy. So for everyone in Brooklyn who wanted a tour yesterday who got the red light, here is the interior look to beat all interior looks of the first ever Airstream 19 Tommy Bahama Relax edition, which I’m now living in for an indeterminate period of time.

This is the view from the sidewalk in most of spots I stop. I like to cozy the door of the trailer up to a grassy spot. I offers a slightly more bucolic vibe—I even take my shoes off and tickle my toes with the blades of grass. Dirt patches are bad for tracking muck onto the floor (see above), and straight-up sidewalk pavement makes the Airstream seem more like a pop-up store than a Domicile on Wheels. Nothing is more demoralizing than watching a couple of millennial men in cut-off t-shirts mistake my home for a jewelry store.

Things to notice above: The awning is deployed. I do this for a couple reasons. It protects the curbside windows from direct sunlight and adds a fraction of privacy, it's Tommy B striping is handsome, and the penumbra it creates—I extend it about halfway, or three feet from the trailer's side—in effects extends my personal space. Pedestrians are much less likely to come right to the entryway if they have to duck under an awning to get there.

Also, the trademark Tommy Bahama marlin cut into the aluminum screen door. It's a classy touch, and gives my little domicile an I'm-rich-and-probably-drunk-and-so-what vibe.

The Dining Room and Home Office

The buzzing control center of the travel trailer is the dining area. This is where we socialize, where we work, and where we stare for sometimes many hours at the passersby. If it's raining, all the better. The rain pelts the aluminum roof and runs off the awning. Occasionally someone will stop under the awning for a respite form the downpour and I'll shoo them away. You can see the removable tinted protective shields for the forward-facing windows. I like the added privacy they offer from the walkers, but if I were boondocking in the sticks I'd probably stow them.

The table can lower between the cushions and convert into a comfy bed. I haven't had any guests yet, but it actually makes for a roomy daybed if you're looking for a change of scenery.

Three burners and an oven are fired by two 30-gallon propane tanks secured to the hitch rig in the front of the trailer. That's plenty for a couple weeks of rigorous cooking and even the occasional baking of cookies. This weekend I even fired up a couple of lobsters in celebration of our nation's Independence. Viewed from outside, cooking in thekitchen of an Airstream has the look and feel of a highly patriotic act: an American, self-sufficient, aware, proudly brewing coffee, unbowed by circumstance or adversity.

When you're not using the stove, the top folds down, creating more tabletop and a nicely clean, minimal look.

It takes a lot of juice to run the refrigerator—or a lot of propane. So since I'm longterm boondocking, I'm using the Airstream-provided Tommy Bahama Relax cooler to keep my eggs, milk and seltzer on ice rather than returning to the propane station every few days. Having said that, the voluminous refrigerator is set up for a very wet long weekend of relaxing, if you know what I mean.

There's just enough storage space to set up a couple for a long weekend of weddings, receptions and various other parties, along with beach time in between. I've managed to wedge most of my life into the closet—that's three suits and a half dozen dressy shirt; the undergarments go into various other drawers and the shoes into one of the exterior-entry storage compartments.

Airstream's use of space is nothing short of brilliant. This Tommy Bahama Relax is made for a very specific task, and everything in it—from the amount of storage to the stereo to the prioritization of fridge space—works to optimize to that task.

Plenty of room to make yourself pretty. The mirrors all conceal deep shelving for everything from Costco-size containers of Doctor Bronner's to a well-stocked first aid kit.

The picture doesn't do the bathroom justice. Airstream has developed an ingenious, magnetically sealed door that reverses to form a space for the toilet and a full shower, which I've coopted into an ad hoc storage space. After three-plus weeks of using the toilet without hesitation or fear, not an iota of foul odor escapes from the blackwater tank when I flush. This is nothing short of a generational leap in the craft and culture of RV life.

I'd like to say this is where the magic happens, but that's not quite the truth. Actually, this is where the sleeping happens. Alone, with a blanket from India and two pillows I pilfered from my parent's home in New England. The mattress is sculpted to the curvature of the aluminum interior and the window opens wide to allow all the conversations in the park on a lazy day to drift through. It's a silver cocoon, very much the part of the Airstream that people think of as an escape pod.