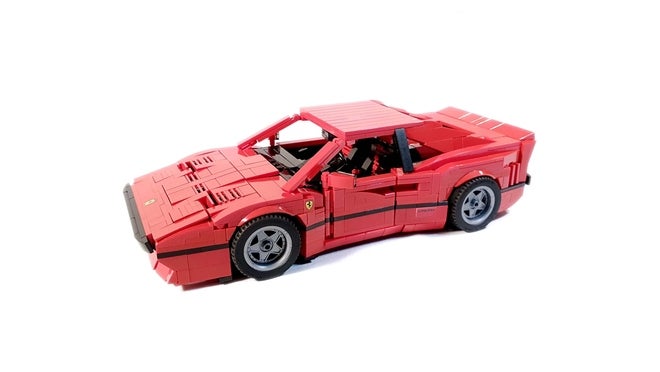 Woe are we who cannot afford a lavish lifestyle of supercars and opulent parties. Most of us are not oil princes or football players, so the closest most of us can come to experiencing anything with a prancing horse badge on it is asking politely if we can sit in one at a Cars & Coffee.

Even much of today's new money can hardly afford Ferrari's 488 GTB, which starts at $245,400, let alone some of the company's past cars that now demand a premium on the auction block. Hagerty estimates one of the rarest of Ferrari's past models, the 288 GTO, to be worth $2,100,000—and with a production run limited to 272 examples, even those with the means to afford one have no option other than waiting for one to come up for sale.

Why wait, though? Why not build one yourself? This Lego Ideas set suggestion seeks to make that prospect feasible for the masses. Designed by user Dani87, this model of a Ferrari 288 GTO recreates all the angular beauty of the 288 in Lego form, complete with opening doors, headlights that rise and retract into the hood, a full interior, moving mirrors, and a removable engine compartment clamshell.

As of right now, the set is no more than a suggestion on its Lego Ideas site, which sources designs from its community to streamline the process for releasing new products, but if the set gains support of 10,000 potential customers, the Danish toymaker will examine the product for potential manufacture and sale. As of the time of this article, the set has 1,112 supporters, with 402 days remaining before it is archived. Given the history of Ferrari-licensed products released by Lego, this set would seem almost guaranteed to hit store shelves if it reached 10,000 supporters.

Given the hordes of tifosi out there in the world, it may be but a matter of time before this set debuts in toy stores.