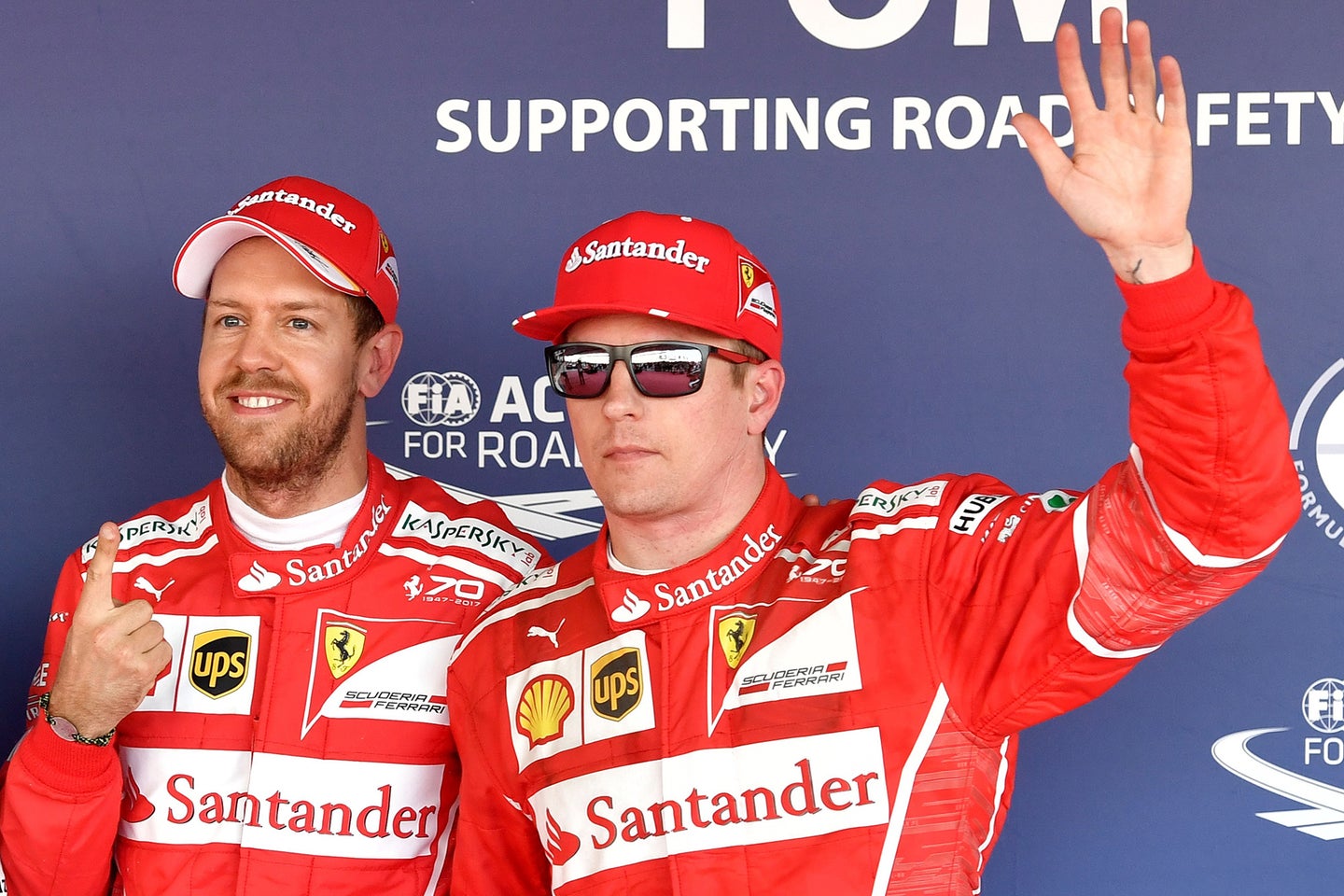 For the first time since the 2008 French Grand Prix, Ferrari has locked out the front row of a Formula One race. Nine years ago, it was Kimi Raikkonen on pole and Felipe Massa staring next to him. Today, Sebastian Vettel took the top spot with Kimi in second.

This also marks just the fourth time, going back to the start of the 2014 season, that a Mercedes hasn't been on pole. Let that sink in for a minute. In the last 63 races, Mercedes has taken pole for 59 of them. That is staggering.

But today is not about Mercedes. Today is Ferrari's day. Their first front row lock out in almost nine years. When one thinks about Ferrari's legacy in Formula One, it sometimes slips the mind that the last decade had been lean. The last time Ferrari won a championship was with Raikkonen in 2007. They've spent the last three seasons rebuilding and putting all the puzzle pieces back in place. They are finally making good on a decades' worth of "This will be the year ..."

Besides a four-way battle for pole position, qualifying was largely uneventful. At the end of Q1, Jolyon Palmer was on a hot lap as time expired. He clipped the higher inside curb of turn 4. He lost control of his Renault and hit wall, thus ending his day. The impact did some damage to the car, but Palmer walked away unscathed.

In an effort to fix a problem that has plagued Haas since last year, the team changed brake suppliers earlier in the weekend. At the start qualifying, it was revealed that they have ditched the new Brembo brakes and had reverted to their old Carbon Industries. The Brembos were giving both Haas drivers issues and inconsistent performance. The switch back made little difference for Roman Grosjean, who qualified 20th on the grid. His teammate, Kevin Magnussen advanced to Q2 and ended up 14th.

McLaren had a quiet qualifying session. Stoffel Vandoorne didn't make the cut for Q2, but Fernando Alsonso did but only managed to end up 15th. Their Honda engines seemed to not blow up, so that's something to celebrate.

The fight for pole got turned up in Q2. Valtteri Bottas and his Mercedes did a lap of 1:33.264. At that point, it was by far the quickest lap of the weekend. Lewis Hamilton was having issues putting a clean lap together. He could only get as close as 0.496 seconds behind his teammate. The two Ferraris of Vettel and Raikkonen were 0.774 and 0.789 seconds off Bottas' pace. This was surprising considering how dominant Ferrari had been in practice.

Bottas was finding time on track that no one else was able to. As Q2 was coming to a close, Raikkonen made one last attempt to take the fight to Bottas. He edged a little closer, but was still 0.399 seconds behind.

Bottas slotted into second place, Vettel into third. Hamilton was still having problems closing the deal and was 1.211 seconds off Raikkonen's time. Being over a second down was still quick enough for fourth place. But Hamilton wasn't only more than a second off the provisional pole, he was more than a second behind third. The two Ferraris and Bottas were truly in their own league today.

When out for their second run, the order on track was Raikkonen, Vettel, Bottas, and Hamilton. Vettel improved his time to a 1:33:194, taking the top spot from his teammate. The Mercedes drivers were putting in some unreal times in the first two sectors. It was looking like Mercedes was going to snatch pole from Ferrari.

Not today. Both Mercedes drivers fell short. The final sector of the track was their undoing. They were pushing hard. They were both up on Vettel's time. They both fell short. Today was Ferrari's day.

When it comes time to race on Sunday, any one of the top four has a shot at victory. Trying to pull one over with a clever pit strategy won't be easy in Russia. Barring multiple safety car periods, everyone at the front will be planning a one-stop strategy. Speed and perfection (on track and in the pits) will win the race for someone on Sunday.

While the Formula One world has been clamoring for a head to head battle between Hamilton and Vettel, We might get more than that on Sunday. Team orders from both Mercedes and Ferrari will most certainly be on the table. If orders get issued, and subsequently are obeyed (or not), is another story. Bottas and Raikkonen seem to have stepped up, not wanting to be relegated as their team's "second driver". They are hungry for a victory.

Will Ferrari translate their front row to a one-two finish? If they do, it won't be because Mercedes went down without a fight.

Sebastian Vettel seems ever confident about tomorrow's race. At the post-qualifying press conference, he was asked  "Is Ferrari back?"

With a smirk, he answered, "From where?"