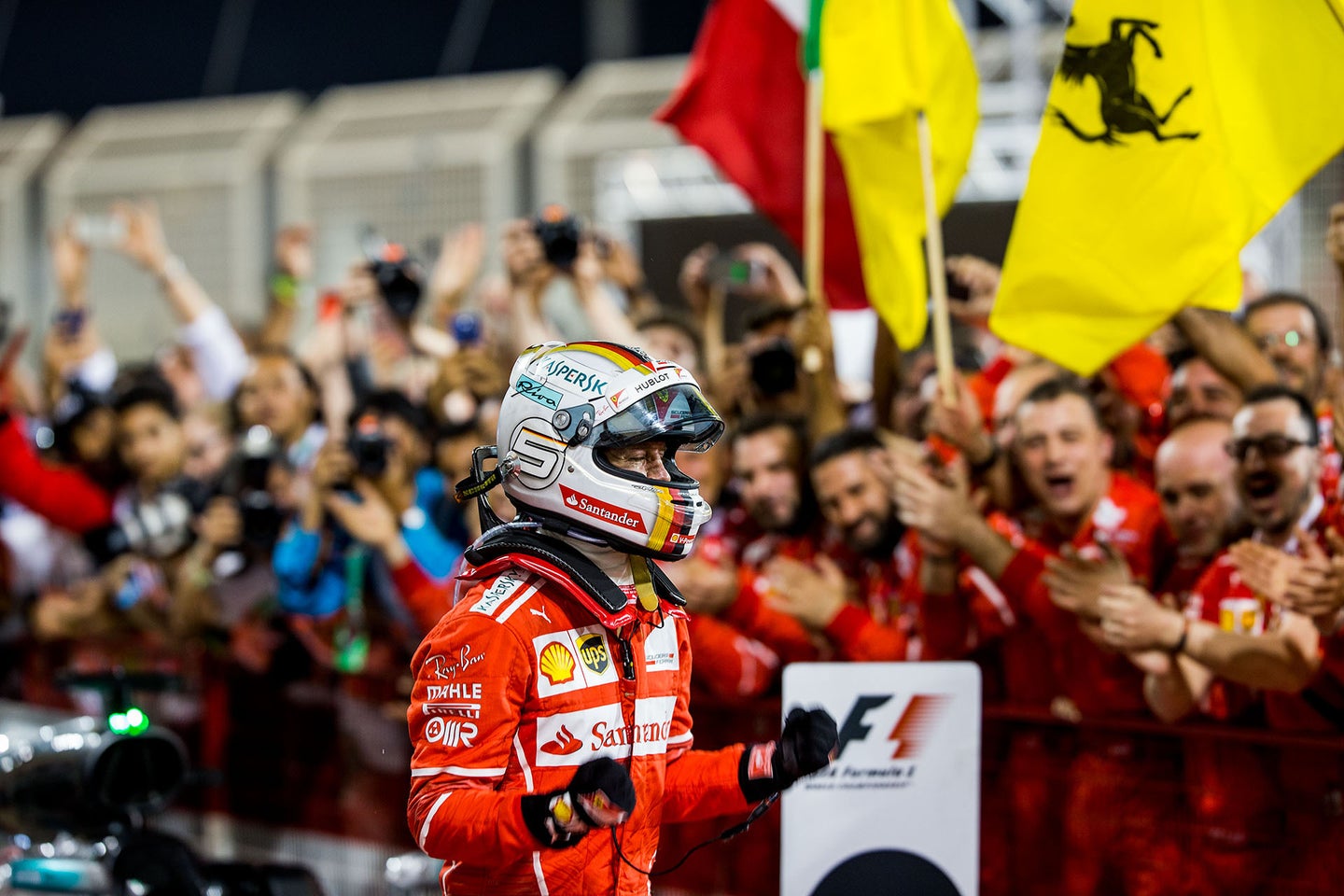 Sebastian Vettel emerged victorious at the Bahrain Grand Prix today. A penalty cost Hamilton the chance to fight for the win, and likewise denied viewers a wheel-to-wheel battle, but it was no less exciting. (And rest assured that battle between Vettel and Hamilton is coming.) Valtteri Bottas started from pole but had no answer for the pace of Vettel and Hamilton, and finished third.

Before the race even started, one of the McLarens had already retired; Stoffel Vandoorne would not make it to the grid. His car suffered from a bearing failure in the MGU-H, which keeps the turbo spooled up. The high heat in Bahrain was too much for it to handle (insert sad trombone sound here).

As the race got underway, the cars roared towards the first corner. Bottas made a good start and held the lead going in to Turn 1. Vettel found more grip on the clean side of the grid and swept around Hamilton in the first corner for second place. Hamilton, who was struggling for grip, almost lost another spot to the Red Bull of Max Verstappen, who had already passed his teammate, Daniel Ricciardo.

In the opening laps, Vettel was keeping right on the gearbox of Bottas, while Hamilton was right behind Vettel. Verstappen caught the first three and was able to follow in lock-step with them. Even once DRS was enabled, it wasn't enough for anyone in the lead pack to get close enough to complete a pass.

Vettel pitted on Lap 10 and had come out in 6th place. Then, starting on lap 11, a series of events transpired that, as they played out, shaped the race and sealed the victory for Vettel.

Bottas was watching his potential first victory slip away, but he was not going down without a fight. Bottas was all over the back of Vettel, trying to force his way by in the first few laps after the safety car. Vettel was having none of it and kept him at bay, eventually opening up a gap and pulling away.

As the race played out, Hamilton would get by Ricciardo and Bottas. Soon, Vettel and Bottas made their final pit stops, but Hamilton could run to the end if he wanted to. The running order heading into lap 42 was Hamilton, Vettel, and Bottas.

Vettel was catching Hamilton quickly, which forced Hamilton's hand. Hamilton opted to pit for fresh tires on Lap 42, thus serving his penalty before the car was serviced. As he rejoined, he had a 9 second gap to Bottas and a 19 second gap to Vettel. Hamilton got up to speed on fresh rubber, eating chunks of time out of the gaps, sometimes close to two seconds a lap.

Hamilton made quick work of his teammate and was on the hunt for Vettel. With nine laps left, he had 12.1 second gap to Vettel. The next time around, the gap was down to 9.8 seconds. Three laps to go and it's down to 5.7 seconds. Sadly for Hamilton, this would be as close as he could get. But is was beyond a valiant effort.

Vettel earned his hard fought victory today. Even though they were six seconds apart at the end, it was a nail biter. "The easter hunt was on. They were hiding some eggs, but it looks like we found them today" said Vettel after the race.

There were fantastic battles going on further down the field. Raikkonen, Ricciardo, and Massa fought all afternoon for 4th, 5th, and 6th. Daniil Kvyat, Estaban Ocon, Jolyon Palmer, Pascal Wehrlein and Fernando Alono were going at it for most of the race, sometimes bumping wheels and losing bits of front wing.

Sadly for Alonso, he retired his troubled McLaren on lap 55 (inset sad trombone sound here). He drove it far beyond it's abilities all race, but just couldn't make it to the end.

Hamilton's five second penalty cost him an honest shot at victory. Fans were treated to what was probably the most exciting Formula One race ever at the Bahrain International Circuit. There was no epic wheel to wheel battle between Vettel and Hamilton this time, but it is coming. It will be everything it's being hyped up to be.

The cars are too damn easy to drive, and he’ll never win again.