Volvo Loyalists Have Something to Celebrate Besides Earth Day and a New Enya Album: Drag Racing! 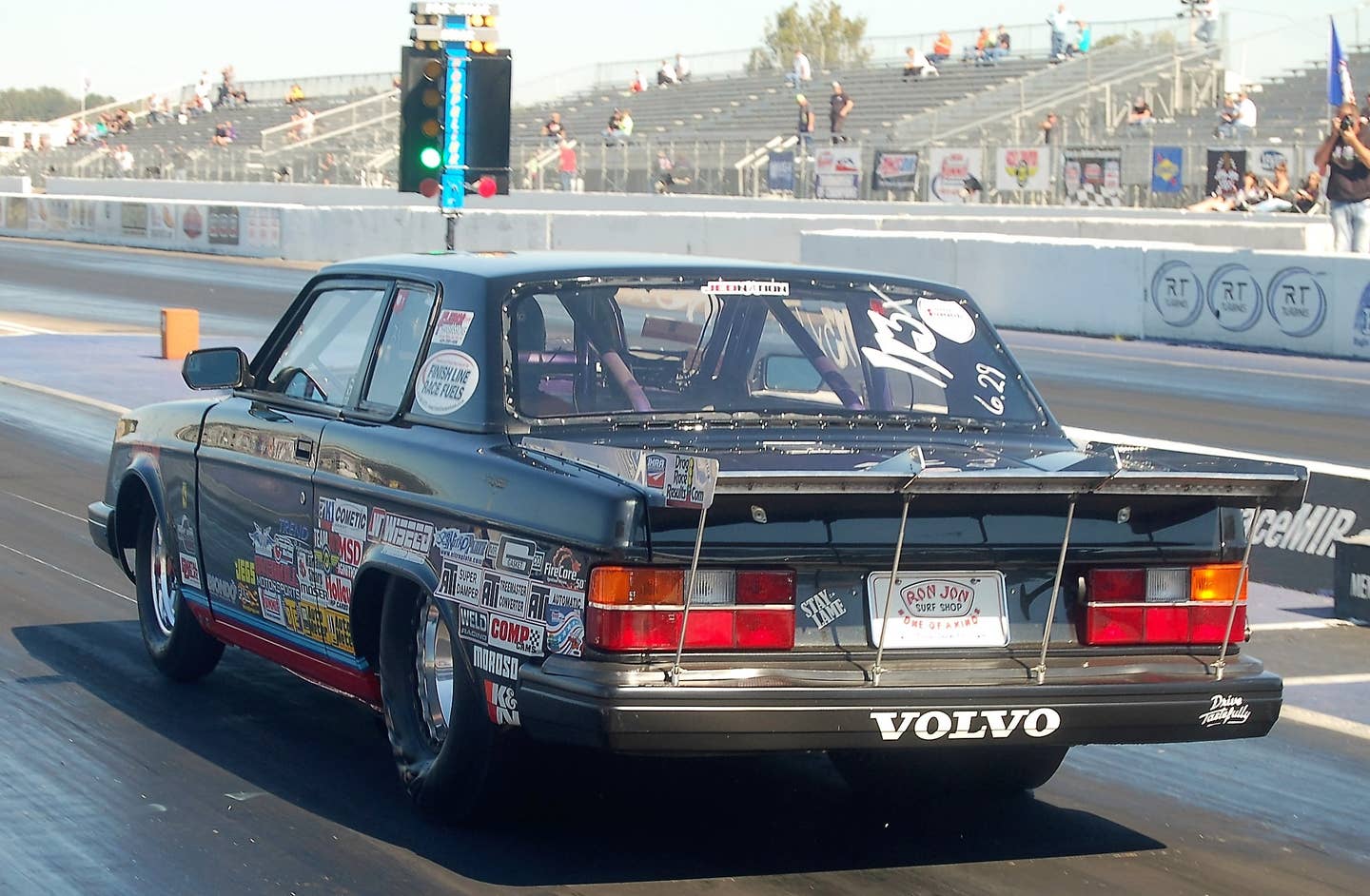 Victor Ellinger of Cleveland, Ohio, likes Volvos. Always has. Saw no good reason why, when he decided to go drag racing, that he shouldn’t do it in a Volvo.

Others, however, saw plenty of good reasons why a 1980 Volvo Bertone Coupe might not be you first choice: First, it’s a Volvo, not the optimum aerodynamic package. As mostly insane advertising executive Emory Leeson, played by the late Dudley Moore, said about his client in the film “Crazy People,” from 1990: “Jaguar – for men who’d like hand-jobs from beautiful women they hardly know.”

Wait, that was about Jaguar. I’m thinking of: “Volvo – they're boxy but they’re good.”

Indeed they are, especially when you stuff a Chrysler 440-cubic-inch V8 under the hood, replacing the 130-horsepower V6. Ellinger added a roll cage, a big wing on the back, massive Mickey Thompson slicks and lots of stickers and decals.

Ellinger brought his Bertone Coupe, with its modifications that would have mortified both Sweden and in Turin, Italy, where the Bertone’s final assembly took place, to the International Hot Rod Association World Finals at Memphis International Raceway. Which is just north of a Tops Bar-B-Q, which I mention because I navigate the Memphis area based on the location of the 15 Tops Bar-B-Qs, where they use only charcoal and don’t wince when you ask for coleslaw right on top of the pork sammich, not on the side.

Anyway, here’s Victor Ellinger and his Volvo Bertone Coupe, just one line on the 71-car entry list for the Mod category at the IHRA Summit SuperSeries, which otherwise looked pretty typical: Camaro, Camaro, Camaro, Mustang, Camaro, Firebird, Mustang, Camaro, one Volvo, more Camaros, some Chevelles, a propane-powered Plymouth Duster and a hot 1968 Camaro from Beaverlodge, Alberta, Canada, where there is no telling what they Bar-B-Q. Moose? Reindeer?

Next thing you know, eliminations start, and Ellinger’s cute little Swedish-Italian Coupe, and he’d appreciate if you would call it a coo-PAY, starts picking off Camaros and Mustangs. And he didn’t stop – right to the final round where he faced Bobby Paul Arnett’s beautiful 1970 Chevrolet Chevelle. While Arnett, of Winchester, Kentucky, clipped Ellinger by a few thousandths off the line -- .015 to .018 – Ellinger pulled it out in the end, with a run of 6.383 seconds at 108.50 mph in the eighth-mile.

And the next thing you know, there’s a Volvo in the winner’s circle, and Ellinger is holding up the big trophy.