John Force’s daughter, the one who isn’t married to IndyCar’s Graham Rahal, takes out the champion. 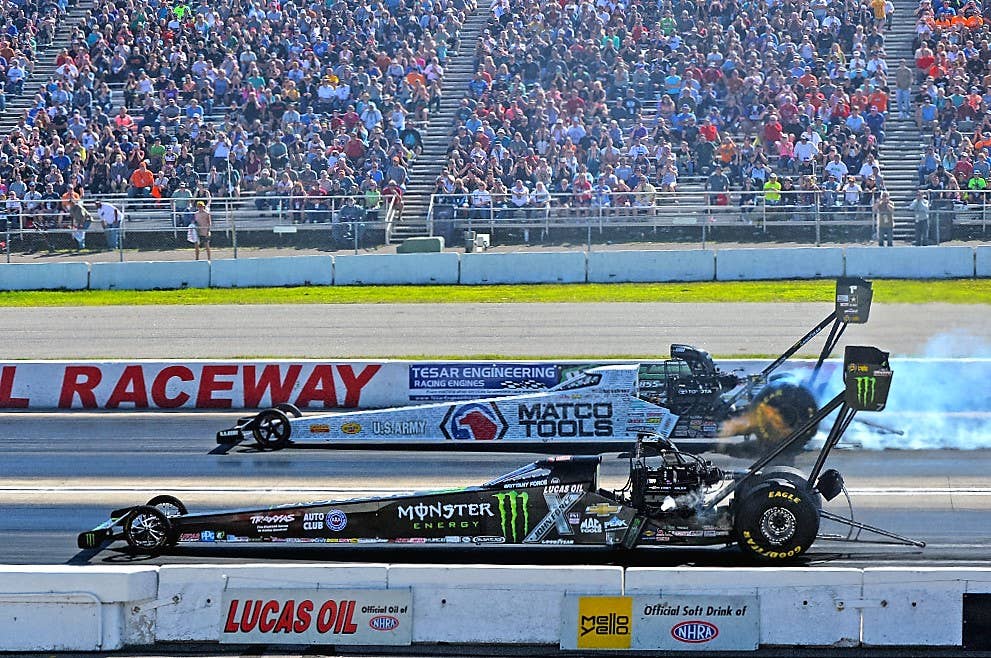 It has taken a while for Brittany Force to get the hang of driving a Top Fuel car, but now that she has, she is a force, pun intended, at every NHRA event. She earned the third win of her career, and coincidentally the third win of this season, at Sunday’s 35th annual Lucas Oil NHRA Nationals, race seventeen in the 2016 NHRA Mello Yello Drag Racing Series.

She won in her Monster Energy dragster with a 4.169-second pass at 180.21 mph to outrun reigning world champion Antron Brown’s 6.566 at 103.47 in his Matco Tools dragster. It was not a particularly pretty race: Brown shook his tires and lost traction early in the run, while Force’s dragster backfired and released the parachutes early and she coasted to the finish line. Her 180 mph top speed was a little slower than the 323.97 mph she ran in qualifying. But hey, a win is a win.

Her first victory came earlier this year in Gainesville. Then she became the first female driver to win in a nitro class at the NHRA Four-Wide Nationals in Charlotte.

In the eliminations Sunday, Force beat Terry Haddock, then three-time 2016 winner Doug Kalitta, and two-time 2016 winner Shawn Langdon in the earlier rounds before defeating Brown in the final.

“It’s awesome to be able to win here,” said Force, who is fourth in the Top Fuel points standings. “I felt good coming in this weekend because we had some success last year, and I’m pretty sure we did well the year before. We are exactly where we want to be as we go into the Countdown [to the Championship] and our biggest race of the season in Indy. It feels so good to bring home another win.”

A final Force note: Family patriarch John Force is asking his fans to vote him into the final spot of the eight-car Traxxas Nitro Funny Car Shootout. Seven cars are qualified, but the final spot depends on fan votes.

He has two wins in 2016 but he was not one of the first seven Funny Car drivers to win this season and will vie for the 8th and final spot through the fan vote and lottery process. Fans can vote for John Force by going to the NHRA’s Facebook page. Voting is open now and will remain open until 9 a.m. (ET) on Tuesday, Aug. 30.

Here’s the official rundown on the Pro classes:

The NHRA Mello Yello Drag Racing Series will continue in Indianapolis, Aug. 31-Sept. 5, with the Chevrolet Performance U.S. Nationals at Lucas Oil Raceway at Indianapolis for the final race of the regular season.

Who Will Replace John Force?

With only one final-round appearance this season, he needs to step on it.

She takes her second NHRA Top Fuel victory at the Four-Wide Nationals in Charlotte.

Brittany Force Finally Gets the Monkey Off Her Back

Her decisive Top Fuel win at the Gatornationals was a long time coming.