What Will the Viper King Race, and Sell, With No More Vipers? 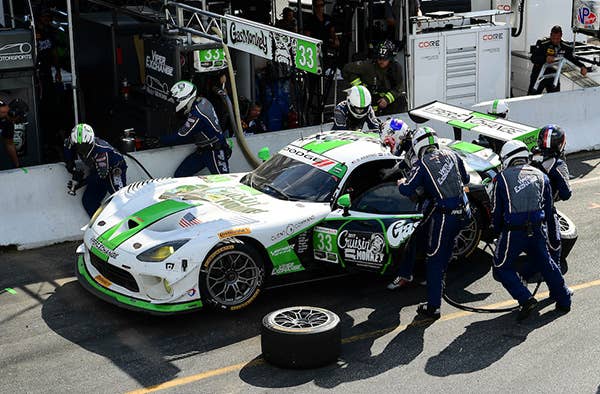 That’s appropriate: Keating, through his ViperExchange.com dealership, has long been the world’s largest Viper dealer. But a huge portion of what Keating has made selling Vipers, he has poured back into racing them. Which advertises his dealership, which helps him sell more Vipers – this using the flawed logic applied by virtually everyone who races sports cars.

“It’s a good business model!” No, it isn’t. But if you want to race sports cars, just keeping telling yourself that, and don’t ask your accountant too many questions.

Dodge ended its Viper racing program nearly three years ago, immediately after winning its class championship in the American Le Mans Series. Sort of like the way they ended their NASCAR Sprint Cup program shortly before they won the Sprint Cup championship with driver Brad Keselowski.

So Keating, and his checkbook, took it upon themselves to keep Viper racing. Along with legendary car builder Bill Riley, they developed a GT-3 version of the Viper, with very little help from Dodge, that was eligible for the WeatherTech series GT Daytona class.

IMSA requires manufacturers to pay a hefty fee if they are going to race in that class. Dodge declined, so Keating wrote another big check.

Keating and co-driver Jeroen Bleekemolen won earlier this year at Detroit – a sort of in-your-face statement if there ever was one at the Motor City – and the win Sunday at the Continental Tire Road Racing Showcase was their second in a row at Road America. They beat Ferraris, Porsche, Audis, BMWs and Lamborghinis.

But, Keating said, it will likely be the last win ever at Road America for a Viper. While the car is eligible next year, Keating said there is no way he is going to keep funding the program out of his pocket, since every other GT-3 car is factory built and sold turn-key to customer teams. And especially since Dodge admitted what we all already knew earlier this year: The Viper is dead.

So what’s next for Keating? He’ll race something next year, but it won’t be a Viper. Of course, Keating also owns, among others, Toyota, BMW, Chevrolet, Ford, Mazda, Volkswagen and Hyundai dealerships, so there still maybe some options to race what he sells.

And as for Viper Exchange? Keating thinks there will be plenty of business in used Vipers to keep that enterprise going.