Rosenqvist's massive Detroit crash wasn't his fault, nor was it Chevy's, according to Arrow McLaren SP. 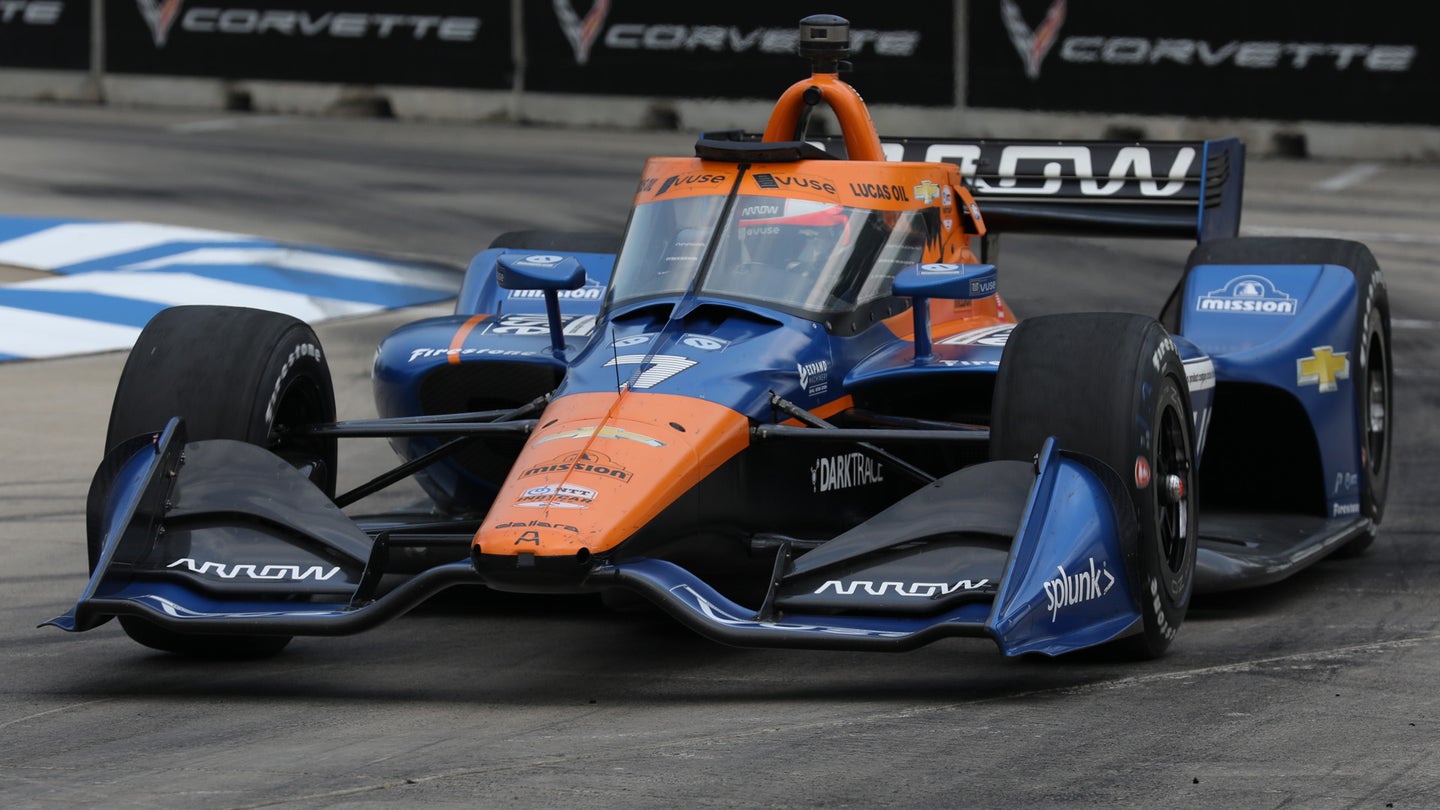 McLaren's IndyCar efforts have been going so well they're making the team confident it can branch out into even more forms of motorsport. Still, it was an extremely mixed weekend for the team at the Detroit Grand Prix as Pato O'Ward took his second victory of the year while Felix Rosenqvist was forced to sit out the second race after a colossal crash in the first.

On the Belle Isle street track, there's a few corners where drivers brake to less than 90 miles per hour and turn six is one of them. Instead, it seemed like Rosenqvist's car just accelerated through and into it, sending the front end into concrete so hard the barriers actually moved several feet and Rosenqvist ended up perched in his car on top of the tires.

We've seen a few weird crashes like this in hybrid and electric series, when cars have caught motor runaway and accelerated uncontrollably. Although Mercedes came up with a (fairly unsatisfying) explanation about brakes for Edoardo Mortara's Formula E crash this year in Riyadh, Daniel Abt's one in Mexico in 2020 was definitely the car getting stuck in go mode, a known risk with battery electric vehicles caused by a sudden negative voltage spike.

That wouldn't affect pure-combustion IndyCar, though. Onboards of the crash seemed to show a full line of blue lights on Rosenqvist's steering wheel, suggesting the throttle was down and he was just a passenger to some sort of failure.

Here's a clip of the crash—heads up, it's not an easy watch:

The good thing is: Rosenqvist is ok. He didn't lose consciousness at any point during the crash or his extraction and after overnight observation, he's been released from hospital. He said, after the second Detroit race, "Yesterday was by far the most violent crash I've had and I'm just so thankful I didn't have any serious injuries. I'm fine but very sore, so driving today would not have been realistic."

But what actually caused the crash? Today McLaren has said it wasn't a mistake by Rosenqvist or a problem with the throttle.

Racer reported Arrow McLaren's statement: “Following the accident involving Felix Rosenqvist in Race 1 of the Chevrolet Detroit Grand Prix today on Belle Isle, the team has undertaken a detailed examination and investigation into the cause.

"As a result, the team has eliminated driver error or any issues related to Chevrolet systems and software, including involving the throttle system.”

In fact, McLaren says "the root cause [was] identified as a singular, non-recurrent mechanical fault" and it's already put a fix in place. It's reassuring that this was just a freak occurrence, not something that shows any inherent flaws to Chevy's power unit systems.

It always looked as though it wasn't Rosenqvist's fault (which professional racing driver is gonna keep their foot to the floor, flying towards a wall?) but equally great to know that, in the cut-throat world of racing, they're not blaming him.

Although Rosenqvist didn't compete in the second Detroit race, his car did in the hands of former Arrow McLaren SP driver Oliver Askew. He stopped being a regular driver for the team after his own colossal Indy 500 crash last year saw concussion symptoms (or more specifically, his honesty in admitting them) rule him out of racing.

The problem didn't repeat, so the team's explanation that it was just something weird that happened mechanically and can be prevented in the future seems to hold up. It's super tempting to get conspiratorial about anything in motorsport but with this not being an accident with any pattern to it, there's no reason to assume the team's unrightfully letting Chevy off the hook for a full failure. The bowtie brand's not Pirelli, after all...