Please, Look at This Formula 1 Driver Wrestling a Sumo Rikishi

Borne back ceaselessly into the floor… by a human bulldozer. 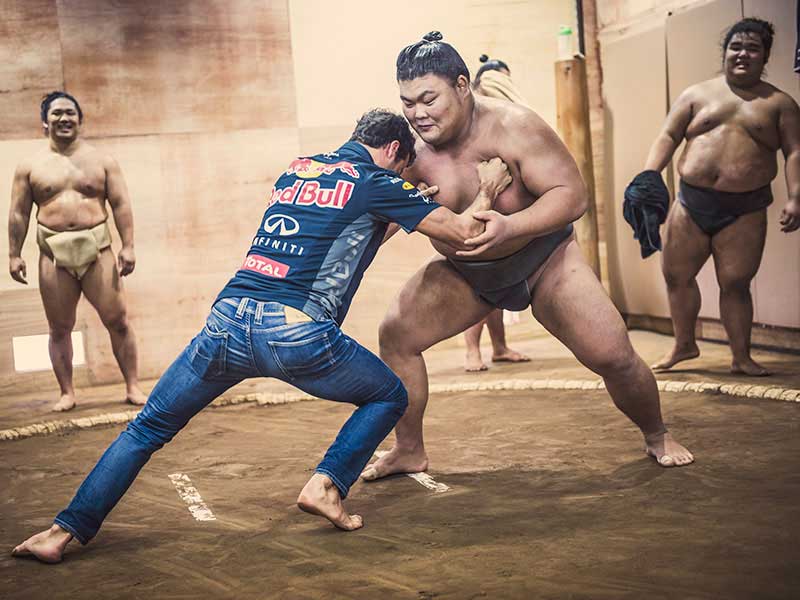 Formula 1 drivers are, by all accounts, fantastic athletes. The official F1 website outlines their severe weight-maintenance regimen: daily cardio, strength training and a restricted, low-fat diet. (Why spend hundreds of thousands of dollars cutting pounds from a car if the driver’s packing a spare tire?). To build the necessary muscle to support the combined weight of helmet and head at 3.5 times the force of gravity, drivers do specialized exercises in hand-built simulators; a standard rowing machine won’t cut it.

Still, for all his muscle tone and endurance, Red Bull driver Daniel Ricciardo was no match for the wrestlers at Miyagino Beya, one of Japan’s top sumo stables. Look at their respective expressions. Ricciardo’s jaw is locked, every muscle in his arms and legs taut with the strain of pushing against the dirt and up into the breasts of a man who weighs on the far side of 250 lbs. All that sinew, so compact and useful in a racecar, is rendered worthless on the mat.

In comparison, the sumo wrestler wears a bemused expression, his mouth contorted in a knowing smirk as he grasps Ricciardo’s elbows in an almost fatherly embrace. Where the F1 driver’s feet are arched off the ground, the wrestler’s are planted fully as he bears in peaceful domination. Ricciardo’s sport rewards lightness; the wrestler’s, mass.

For the same experience at home, try running headlong into a refrigerator made out of Wagyu beef.