Does Number Two Try Harder? The IHRA Will if Mike Dunn Has His Way 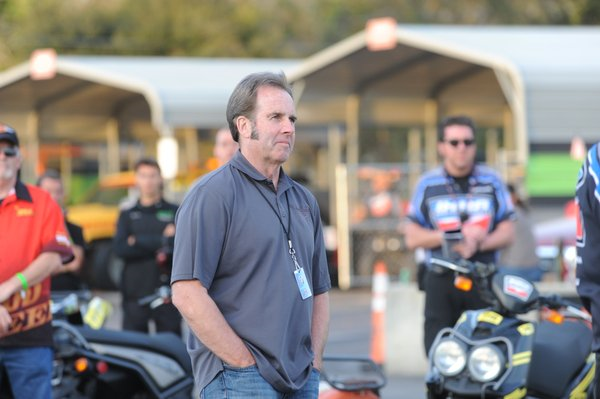 After a career with the NHRA, both on-track and in the television booth, Mike Dunn is taking on a new challenge. At 59, he has accepted the job of president of the rival drag racing sanctioning body, the IHRA.

One thing he wants people to know: He didn’t take the job to be a figurehead, a spokesman. “I think they are going to give me an opportunity to help the IHRA grow, and that appealed to me,” said Dunn, looking down from the tower to the action on track a Orlando SpeedWorld Dragway. “I’ve spent a long time in drag racing, and I think I can make a contribution.”

Now owned by a major hedge fund company, and solidly headquartered in West Palm Beach, Florida, at the drag strip and road course the company owns, the IHRA is making its move. It may never challenge the NHRA, but the drag racing sanctioning body wants to carve out a larger and more distinct niche for itself. It will remain sort of the working man’s drag racing organization, where racers work on their own cars, handle their own publicity, and often pay the bills out of their own pockets, as sponsors are hard to come by where there is no TV package. Which, in fact, is something Dunn and his staff plan to address as one of the first items up for discussion. They've already hired a broadcast consultant, former CBS network president Neal Pilson.

Undoubtedly, 2016 is a rebuilding year, with only seven events for the top IHRA Drag Racing Series, with two of them in Canada. Next year there will be more, but don’t forget that the IHRA sanctions hundreds of tracks across North America, and there are regional races going on someplace most every week. The next big IHRA Drag Racing Series event is the Texas Nationals at San Antonio Raceway in Texas April 1-3.

While Dunn isn’t moving his family from California, he is getting a second home in West Palm Beach, to be accessible to the IHRA’s headquarters. “I’m making a commitment to them, just like they’ve made a commitment to me. We’re working on a five-year plan, and I think some exciting things are going to happen.”

One of the appealing aspects that drew Dunn to the IHRA was the presence of Chris Lencheski as the IRG Sports + Entertainment (IRGSE) Vice Chairman of the Board of Managers and Chief Executive Officer, parent company of the IHRA. He has extensive experience with a variety of sports, ranging from Formula One to America’s Cup.

“He gets it,” Dunn said. “He understands our challenges and he has ideas that address them.”

Indeed, Dunn has an impressive pedigree, too. He grew up in Southern California, the son of Hall of Fame Drag Racer “Big Jim” Dunn. He began racing bicycles and go-karts as a teenager before earning his Alcohol Funny Car license in his dad’s car just before he turned 20 in 1976.

The following year he earned his Fuel Funny Car license before taking a job as a crew member for legendary car owner Roland Leong and working for him until 1980. In 1986 Dunn won the biggest race of his career, the U.S. Nationals, in Joe Pisano’s Oldsmobile.

With so few good rides available, Dunn signed on in 2002 to be the on-air analyst for ESPN’s drag racing coverage, a job he held until last year, when Fox took over the TV coverage from ESPN. But obviously, Dunn wasn’t out of work for long.

“I’m so happy to get this year started,” Dunn said. “There’s so much we want to do to take the IHRA to the next level.”