What Scares a Man Who Drives 326 mph?

Not much, but NHRA drag racer Tommy Johnson, Jr. will admit to one thing. 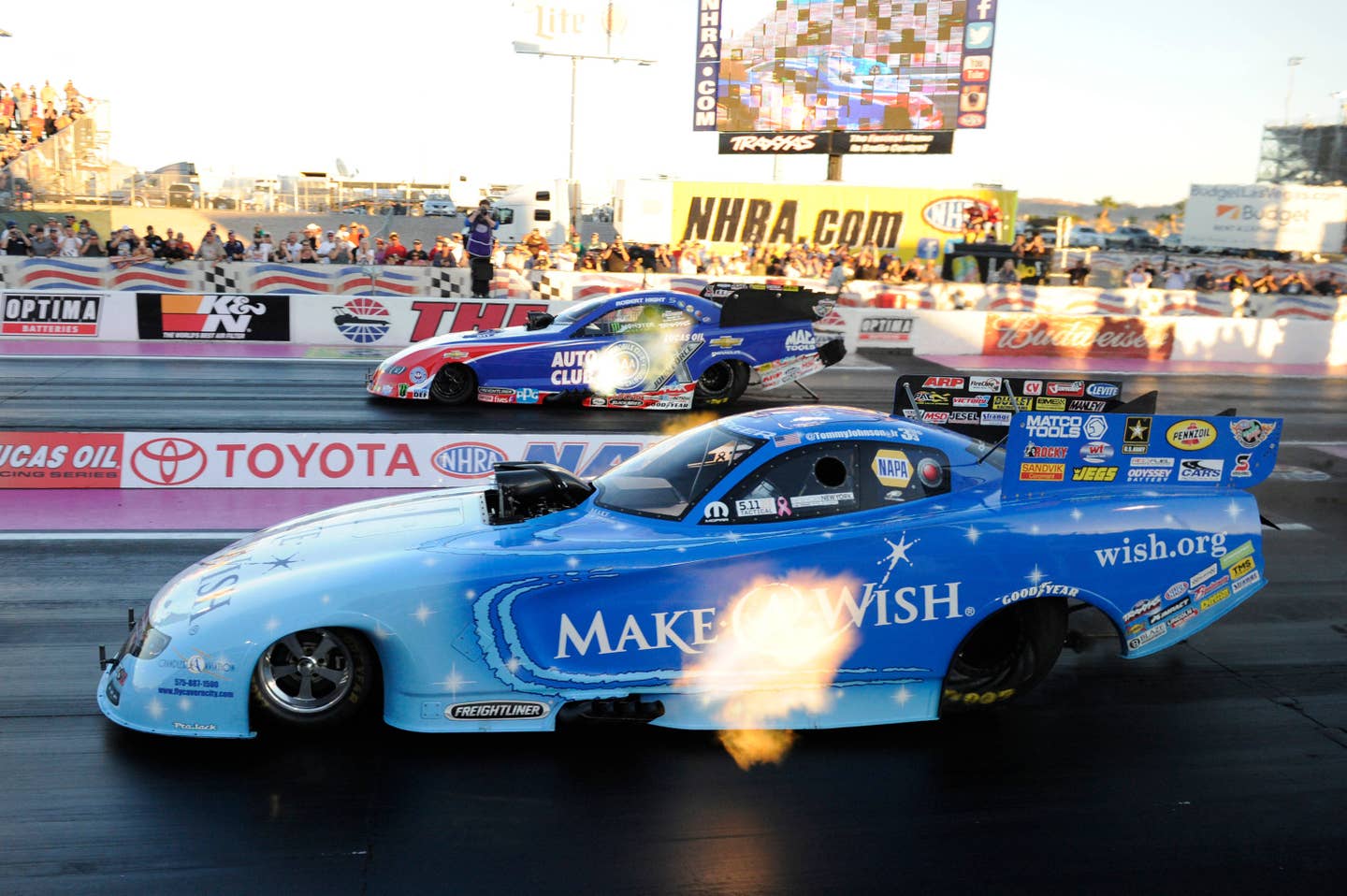 Drag racer Tommy Johnson, Jr., drove a Funny Car 326.08 mph in a thousand feet at Pomona Raceway in California late last year. Pomona is in the middle of the city, and was built when race cars weren’t so fast, and the runoff area at the end of the quarter-mile track is perilously short, and can’t be extended without rerouting roads.

That had to be the scariest ride on the circuit, right?

Normal races, where everything goes as it is supposed to, don’t scare Johnson, who started pro drag racing at age 15, when he became the youngest person to date to hold an NHRA license. He is one of only 14 drivers to win events in both Funny Car and Top Fuel. He was one of the first drivers to make a run at under 5 seconds, and over 300 mph.

He does not scare easily. But that doesn’t mean it’s impossible.

So what does scare him?

“I’ve had the throttle hang open three or four times,” he says. “That’s pretty intense. It gives you too much time to think about what’s going to happen. When the engine blows up, and blows the body off with it, that happens so fast – boom, and it’s over with.

“But with the throttle hung open – I know the end is coming, and I’ve got time to think about it.”

So what do you do?

“You reach over and hit the fuel shutoff. It blows the engine up, but that’s all you can do. And you have to react instantly, because man, you’re covering ground.

“The last time it happened – the throttle hung, I slammed the fuel shutoff and blew it up, and the parachute cables broke! If you’re at Pomona, it’s over. You’re done.

“But I happened to be at Memphis, and the drag strip is part of a road course. After that is a sand trap. I made the decision to turn onto the road course and made it, but barely.”

The NHRA has always been based on a quarter-mile track, but in June of 2008, Funny Car racer Scott Kalitta was killed at Old Bridge Township Raceway Park in New Jersey. Kalitta’s car blew up as he was approaching the finish line at over 300 mph. He pulled his parachutes, but they were damaged by debris. Kalitta went into the catch fence at about 125 mph. He was killed.

A month later, the NHRA shortened the runs for Top Fuel and Funny Car to 1,000 feet, leaving it at a quarter-mile for the other classes. Teams have made the cars go almost as fast in 1,000 feet as they were in the quarter-mile, but  now they have more room to slow down.

Johnson, a traditionalist, says that now, he’d have trouble going back to the quarter-mile, which a lot of fans continue to clamor for. “I don’t know if I want to go back to a quarter-mile,” he says. “If we did they are going to slow us down, and I don’t want to drive a puppy dog. I want to drive an animal, and that’s what we have now.

“The longer you drive it, it becomes a little less like an animal, but then the crew figures out how to make it go faster and it’s an animal again. And this change to the headers has made it into a really angry animal.”

That change involves the eight exhaust pipes, four on each side, that exit under the body. The tips used to tilt upwards, giving the driver additional downforce. But now the tips point straight back, “actually shoving the car forward. It makes the car much harder to drive.”

And sometimes, Johnson says, fast isn’t pretty. In pre-season practice, he made a pass at 3.87 seconds, which would have been a world record had he done it at an event. “The car was all over the place. It was ugly. But I knew it was fast. Afterwards the crew said it looked so bad they were sure I was going to lift. I said, ‘No way I was lifting on that run.’”

While Johnson drives the Make-A-Wish car, the sponsor is actually Terry Chandler, whose father struck it rich in oil back home in New Mexico. Out of her pocket, Chandler backs the dragsters of Johnson and teammate Jack Beckman, who drives the another Dodge, the Infinite Hero car. Neither Make-A-Wish nor Infinite Hero spends a dime on the cars – it all comes out of Chandler’s pocket, and no, it isn’t tax deductible. Why? “I just love drag racing, and the people,” she says.

Next up for Johnson and the Make-A-Wish Dodge is the NHRA Four-Wide Nationals at zMax Dragway, which is next to Charlotte Motor Speedway, April 22-24.