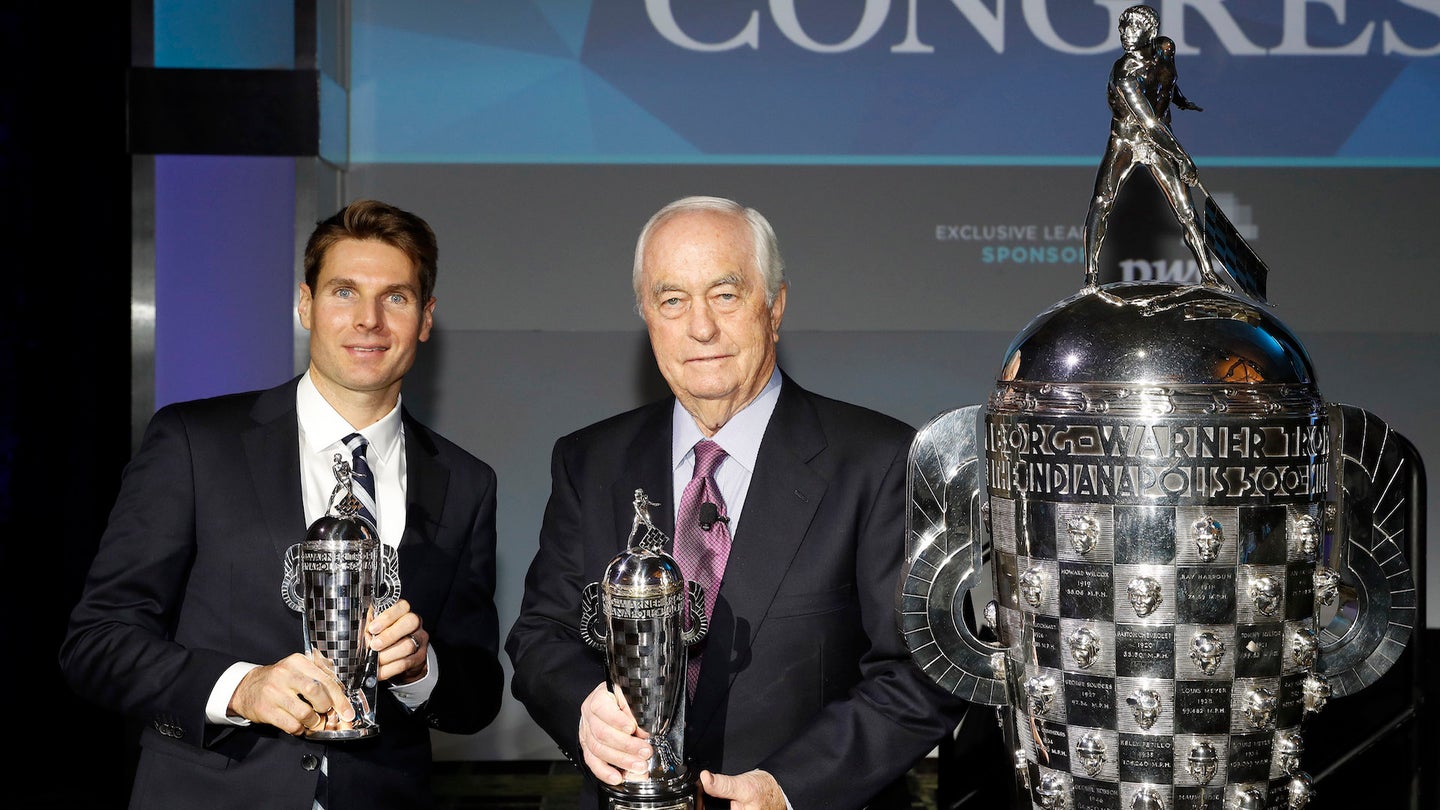 Winner of the 102nd running of the world-famous Indy 500 race, Will Power, received his take-home "Baby Borg" trophy on Wednesday night at the Automotive News World Congress in Detroit. Power's in-race coach and team owner Roger Penske also received his well-deserved hardware, which is essentially a miniature version of the towering Borg-Warner trophy—the real thing weighs over 153 pounds and features the face of every race winner since 1911.

Both Penske and Power shared their happiness with a crowd of around 300 as they received a trophy that's been in the making since June 2018. The detail-intense piece of hardware involves a laborious process of capturing, detailing, and producing a replica of the winner's face, which explains why Power considered Wednesday's award ceremony led by BorgWarner CEO Frederic Lissalde a sort of "second celebration" of his May 2018 victory.

"Roger gave me the opportunity back in 2010 to drive full-time for him, and I'm so glad I can return the favor and win him an Indy 500—not that he needed any more," Power told The Drive.

Power poked fun at the fact that his boss is the winningest racing team owner in the history of Indy car racing, having successfully amassed 17 Indy 500 victories, which also means a staggering 17 Baby Borgs are on display at Team Penske headquarters—more than any other team owner or driver. As for Power, this was his first Indy 500 win.

"It's a real pleasure to be here," Power added. "I want to thank all the people, my wife, and I want everyone to know that racing is truly a team sport, and that we're coming on strong this year. Roger [Penske] is now on my radio, so he knows what I want and I know what he's looking for, so we're coming on strong."

The Australian racing driver will be driving for Team Penske once again in 2019, as he chases his second IndyCar championship and second Indy 500 win at the wheel of the Verizon-sponsored No. 12 Chevrolet. Despite choosing to discontinue its title sponsorship of the IndyCar series, Verizon will continue to sponsor Team Penske in 2019. Tech company NTT recently signed a multi-year agreement to headline the IndyCar championship as well as the Indianapolis Motor Speedway and other racing events on American soil.

"I think the sport [IndyCar] has great momentum, and Verizon has done a great job growing IndyCar and its technology over the years," Penske told The Drive. "I think NTT saw the opportunity with Verizon moving its sponsorship to other sports, but overall I'm excited to see them in."

The Art Deco-inspired trophy dates back to 1935 and features the face of every Indy 500 winner since 1911.