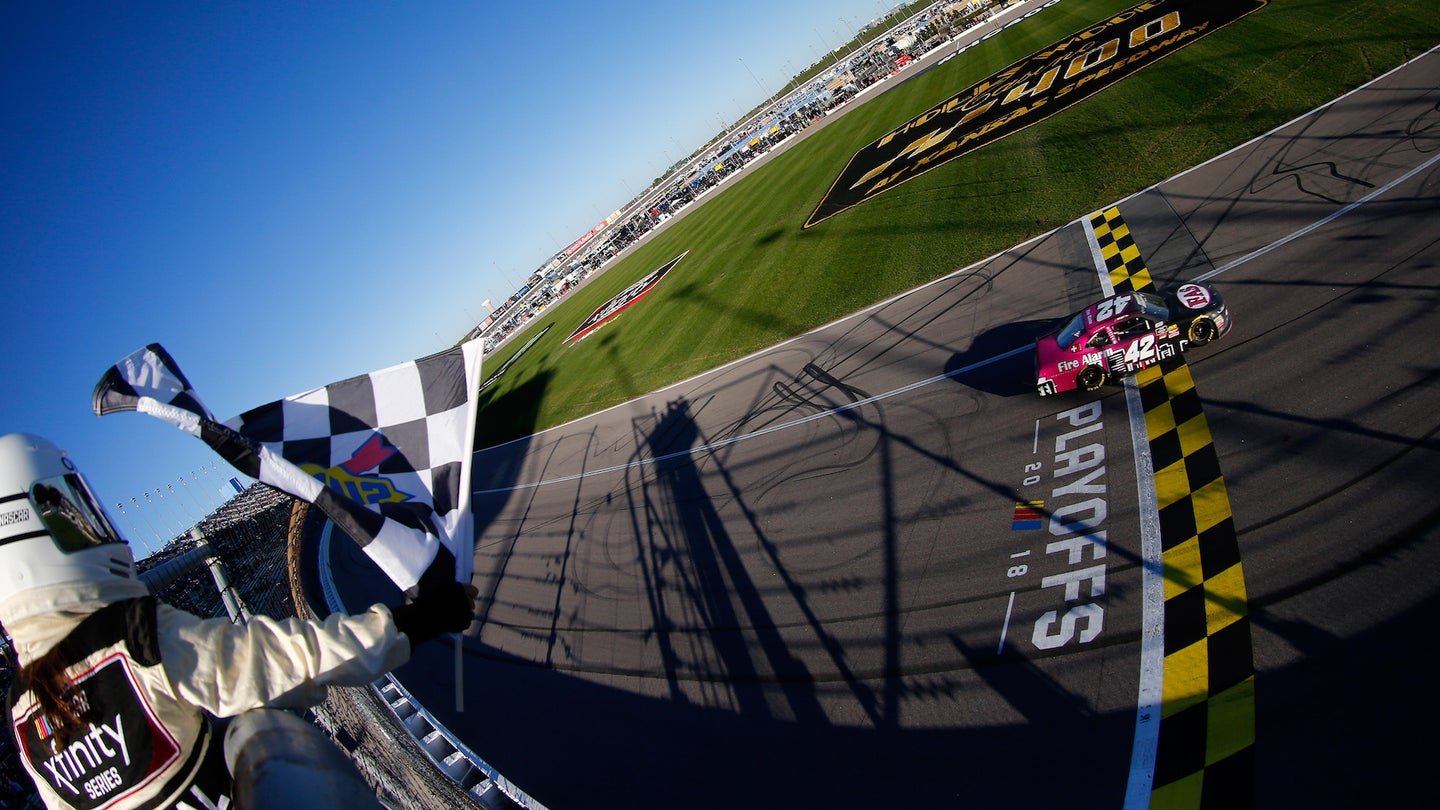 Part-time NASCAR Xfinity Series driver John Hunter Nemechek claimed his first series win Saturday when he took the checkered flag at Kansas Speedway. With the victory, he became the third driver to win from behind the wheel of the No. 42 Chip Ganassi Racing Chevrolet in 2018, joining Kyle Larson and Ross Chastain.

"This means a lot, especially at Kansas,” Nemechek said. “In 2004, I forgot how old I was, but Dad swept the weekend in the Xfinity and Cup series. It's pretty special. Thanks to Chip Ganassi for giving me this opportunity.”

Nemechek and second-place finisher Daniel Hemric combined to lead most of the 200-lap race, with Nemechek leading 64 and Hemric leading 128. They were the only two drivers to lead more than two laps. Hemric and Nemechek also were stage winners. Hemric won the first 45-lap stage of the race and Nemechek was up front when the second stage ended at lap 90.

"We really showed the strength of Richard Childress Racing's NASCAR Xfinity Series program this weekend, especially with this No. 21 South Point Chevrolet,” Hemric said. “It was great to run up front and earn stage points, and the pit crew did a great job to get us off pit road like we needed to all day. Unfortunately, I was just unbelievably loose that whole last run. That was the loosest I had been all weekend or at any mile-and-a-half we've been to in a couple of months. I'm not sure what happened; it just wasn't meant to be, I guess. We did a lot of things well, way more things well than bad. I am proud of that. I'm proud of our effort, proud of our pit crew and the things we did. I don't know. I just have to have faith that it will all work out the way it is supposed to when it is supposed to, just not today."

Nemechek took the race lead from Hemric on Lap 60, but during the caution after the second stage, Hemric beat him off pit road to retake the lead.

Elliott Sadler got out of the pits first with a two-tire pit stop during a Lap 164 yellow flag, but soon after the restart, Hemric and Nemechek moved into the first two positions in the running order and exchanged the lead back and forth. Nemechek took his final lead of the race on Lap 171 and pulled away.

Saturday’s race got off to a slow start with a string of three cautions in the first 25 laps, the first coming on the Lap 1 because of a nine-car wreck between Turns 1 and 2. Four of the eight playoff drivers—Justin Allgaier, Austin Cindric, Christopher Bell, and Cole Custer—were collected in the incident. Allgaier, Bell, and Cindric retired from the race with their heavily-damaged race cars. Bell was credited with a 37th-place finish, Allgaier 38th, and Cindric 39th.

“I didn’t really see much of anything,” Bell said. “Just kind of driving around there. Just heartbroken. This is one of my favorite race tracks we go to, and especially after the run I had last year, this is the race that I was looking forward to whenever we started the year back in February. Our Rheem Camry was fast throughout practice, and we qualified second, so felt like we were going to be able to contend for the win, but I think this is—actually this is not the first time I’ve been out on the first lap. We’ll try and make up for it at Texas, and we still got a lot of race tracks that I can win races at, so hopefully, we’ll move on from here.”

Custer was able to continue, but he wound up several laps down after going to the garage for repairs to his power steering. He finished 26th.

The other four playoff drivers finished in the top-10. In addition to Hemric, Elliott Sadler and Tyler Reddick were in the top-five in third and fifth. Matt Tifft finished sixth.

UP NEXT: The NASCAR Xfinity Series will take a weekend off before continuing the second round, or round of eight, of its 2018 playoffs on Nov. 3 at Texas Motor Speedway. The Texas race will be the second of three contests this round with only two races remaining after it in the 2018 season. Monster Energy NASCAR Cup Series drivers have dominated Xfinity Series races at TMS as of late. Erik Jones is the defending winner of the fall race there, while Ryan Blaney won the most recent Xfinity Series bout at the track in April. Cup drivers won't be in the race this time around, as they've been barred from competing in Xfinity Series playoff competition.

Fords claimed the top-five spots on the starting grid for Sunday’s Hollywood Casino 400.

The No. 42 CGR team broke a rule while repairing crash damage in Sunday’s playoff race, putting Larson further back in the points hunt.