Fords claimed the top-five spots on the starting grid for Sunday's Hollywood Casino 400. 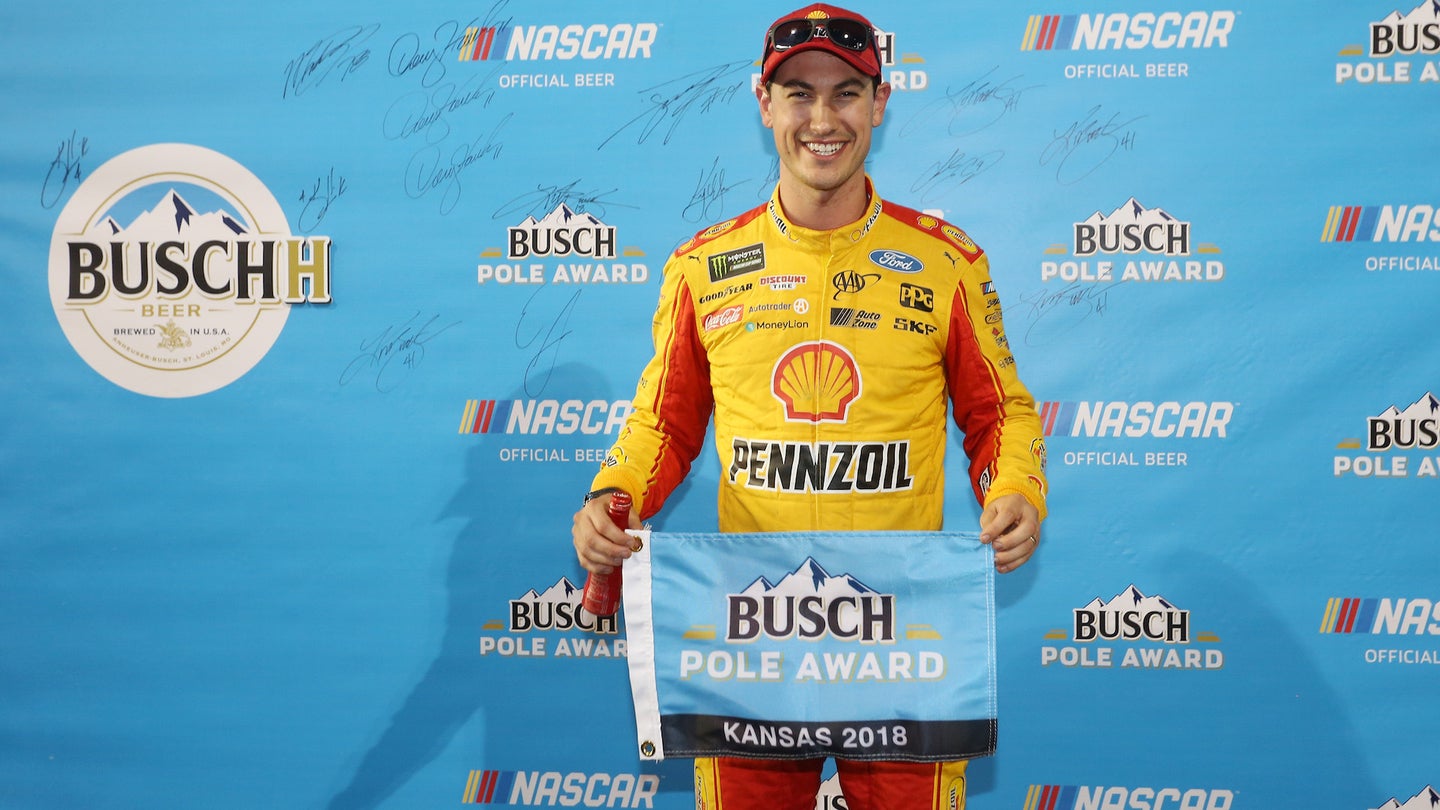 Joey Logano ran a 28.177-second/191.646 mph lap around Kansas Speedway on Friday in the third of three rounds of Monster Energy NASCAR Cup Series qualifying to claim the pole for Sunday’s Hollywood Casino 400. It’s his first pole of the 2018 season but the second of his career at Kansas.

“Obviously, it was a great lap,” Logano said. The car was great from when we unloaded. I was laughing when we came in saying we made good adjustments today, and it was a joke because we didn’t change anything from when we unloaded. We were pretty good the first lap on the race track, partly because we did the test here and that definitely helped us, which is great. Starting up front is always important, especially in the playoffs when it is a cut off race.”

“That is cool to see Ford run one through five,” Harvick said. “We were just a little bit tight both corners there on the last round, but it is a good start for us for the weekend for sure.”

Harvick was second in each of the three rounds of qualifying. But in the first two rounds, he trailed one of his Stewart-Haas Racing teammates. Clint Bowyer led the opening round with a 28.228-second/191.299 mph lap, while Almirola was tops in the second round with a 28.239-second/191.225 mph lap.

After posting the best time in round one, though, Bowyer didn’t advance beyond round two in qualifying. Instead, he wound up 14th.

Eventual pole sitter, Logano, was in the top-five throughout qualifying.

Kyle Larson’s troublesome week continued into the opening day of the Kansas weekend. After losing 10 points as part of NASCAR’s punishment for improper repairs to his car during the Talladega Superspeedway race on Oct. 14, Larson wrecked in Friday’s lone practice session at Kansas. As a result, he’ll have to drop to the back for Sunday’s green flag. Qualifying on Friday still carried some significance, though, as it determined pit selection for Sunday’s race. Larson was the only playoff driver who failed to advance out of round one in qualifying, winding up 27th.

Aside from Bowyer and Larson, Chase Elliott also failed to get to the final round of qualifying to vie for the pole. Elliott’s qualifying effort fizzled out in the 13th position in round two.

Harvick and reigning Cup Series champion Martin Truex Jr. have combined to win the four most recent races at Kansas. Truex Jr. is the defending winner of the Hollywood Casino 400, but Truex Jr. was victorious in the last Kansas race in May. Truex was last in the third round of qualifying, putting him 12th on the Sunday race starting grid.

Sunday’s race is the elimination race of the second round of the playoffs, so four drivers will be eliminated from the playoffs after the Kansas checkered flag. Keselowski, Blaney, Larson, and Alex Bowman are the drivers most in danger of being eliminated Sunday. Bowman will start 10th in the Hollywood Casino 400.

The Hollywood Casino is scheduled to get underway Sunday, 1:20 p.m. CDT, and will be shown live on NBC.