We got together with the only two drivers who can win this year’s $200,000 prize and asked them to compliment each other. Yeah, it went well. 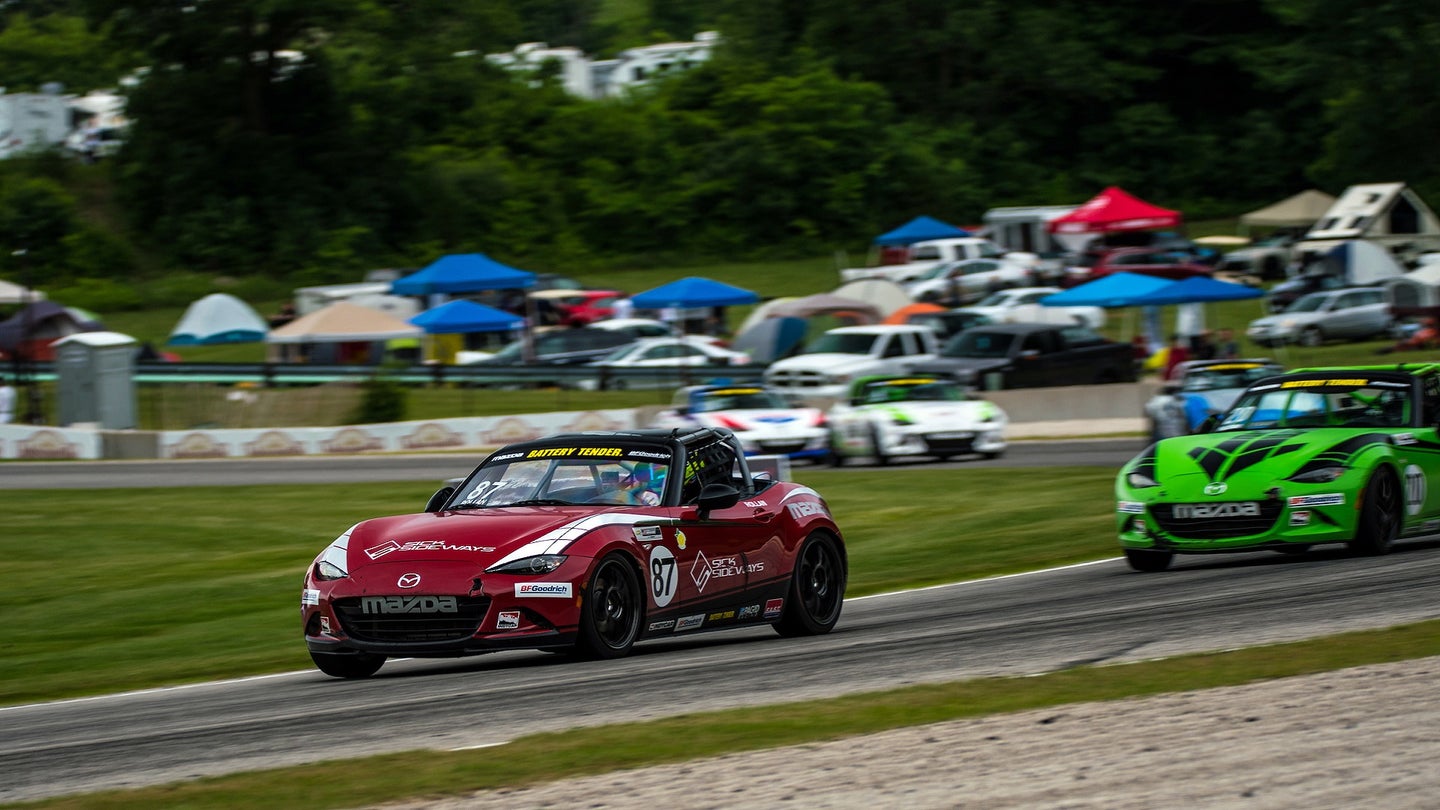 The Battery Tender Global Mazda MX-5 Cup will crown a new champion come this weekend's doubleheader at the Monticello Motor Club in upstate New York. But before that happens, one of the two leading drivers who can mathematically clinch the championship and pocket the $200,000 racing scholarship must survive two grueling races where anything can happen.

We recently got together with the two championship frontrunners: Nikko Reger and Selin Rollan, and asked them to give us a rundown of their respective seasons. However, we also turned up the heat when we asked them to compliment each other's skills. Interestingly enough, it turns out that rivals aren't too willing to praise each other when they're days away from a career-defining race.

At the top of the championship standings is 20-year-old Reger, a sharp-minded young man from Dallas, Texas who can already taste the champagne and feel the heft of the oversized prize-money check. Just one single point behind him is Rollan, last year's winner of the $100,000 Mazda Road to 24 Shootout scholarship and a fierce racer who thrives on perfection. The duo couldn't live more contrasting lives, with Reger being a full-time student at the University of Texas chasing an international business major, while Rollan is a sales associate at Classic Mazda in Orlando, Florida, putting his money where his mouth is when it comes to Mazda products.

After 10 out of 12 races this season, both drivers each have won two races outright and only failed to finish one race due to mechanical failures. When asked to summarize their respective seasons, Reger labeled his "messy" while Rollan said his had been an "incredible learning experience." Just imagine where Reger would be had his season not been a self-described mess?

"We struggled a lot with the car," said Reger. "Sometimes things didn't go our way but we've been fortunate enough to stay ahead on points. But being just one ahead is cutting it a bit close!"

There aren't any do-overs in racing, so it's only obvious that both championship contenders have at least one moment that they'd like another crack at. When there's only one point separating first and second place in the standings, any small thing can become hugely important in retrospect, be it a single mechanical failure, a bad qualifying performance, or maybe even an ill-timed pass.

"I would've changed my engine before the Mid-Ohio race," Reger admitted. "I had an awesome weekend there, having a blast, doing great, and with 10 minutes to go my engine overheated and I fell from third place to 21st or something like that."

Of course, not all is doom and gloom, as both Reger and Rollan have had a ton of stellar moments in 2018. From competing on iconic tracks like Road America and the Circuit of the Americas to seeing 14-year-old Robert Noaker, a teammate of Rollan, get his first MX-5 Cup victory, both drivers have enjoyed good times on and off the track.

"Race two at the Circuit of the Americas, most definitely," said Rollan. "It was raining and it was my first professional win, so it was a very, very special moment for me. Definitely the best memory of my season, so far."

"The weekend sweep at Barber Motorsports Park was pretty incredible because we set the precedent for the championship there and that's why I'm in this position right now," said Reger. "But honestly, the best thing about my year was getting to know my team and learning and doing whatever we had to do to perform. That's the peak of my season for me."

Despite six drivers having a remote mathematical chance of winning the championship—say, if both Reger and Rollan wiped out of both races, it's up to this duo to snap some necks and cash some checks this weekend. Both have been able to separate themselves from the rest due to their raw talent in an incredibly competitive racing series. That being said, when we asked them which of their rival's skills they'd like to possess, the answers were less than generous.

"One skill...I feel like he [Reger] is really good at is breaking transmissions at the best time!" Rollan laughed. "See, I always managed to break my transmissions during the race [instead of practice], and he didn't, so that's a pretty good skill to have!"

"I'm not sure that that's a skill," responded Reger. "Man, that's a tough question. I mean, sometimes [Rollan] sees a red streak and he just goes for it. That'd be a cool skill to possess, I suppose."

At the end of the day, either racer would make a worthy MX-5 Cup champion. After spending a considerable amount of time with both drivers at Road America earlier this year, it's evident that these young guys aren't only talented racers but also kind-hearted, smart humans. When asked about what it would mean to them if they won the championship, neither one of them mentioned the prize money, fame, or recognition.

Instead, Rollan expressed his gratitude towards Mazda for taking a chance on him and providing him with the means necessary to take his skills to the track and prove that he has what it takes. In fact, he's already proven that, as Rollan already earned the title of 2018 Rookie of the Year and will earn a $75,000 scholarship as a result. He'll be the only driver to ever win both awards if he emerges victorious this weekend.

Regardless of who wins, the next generation of sports car racers is looking mighty fine.