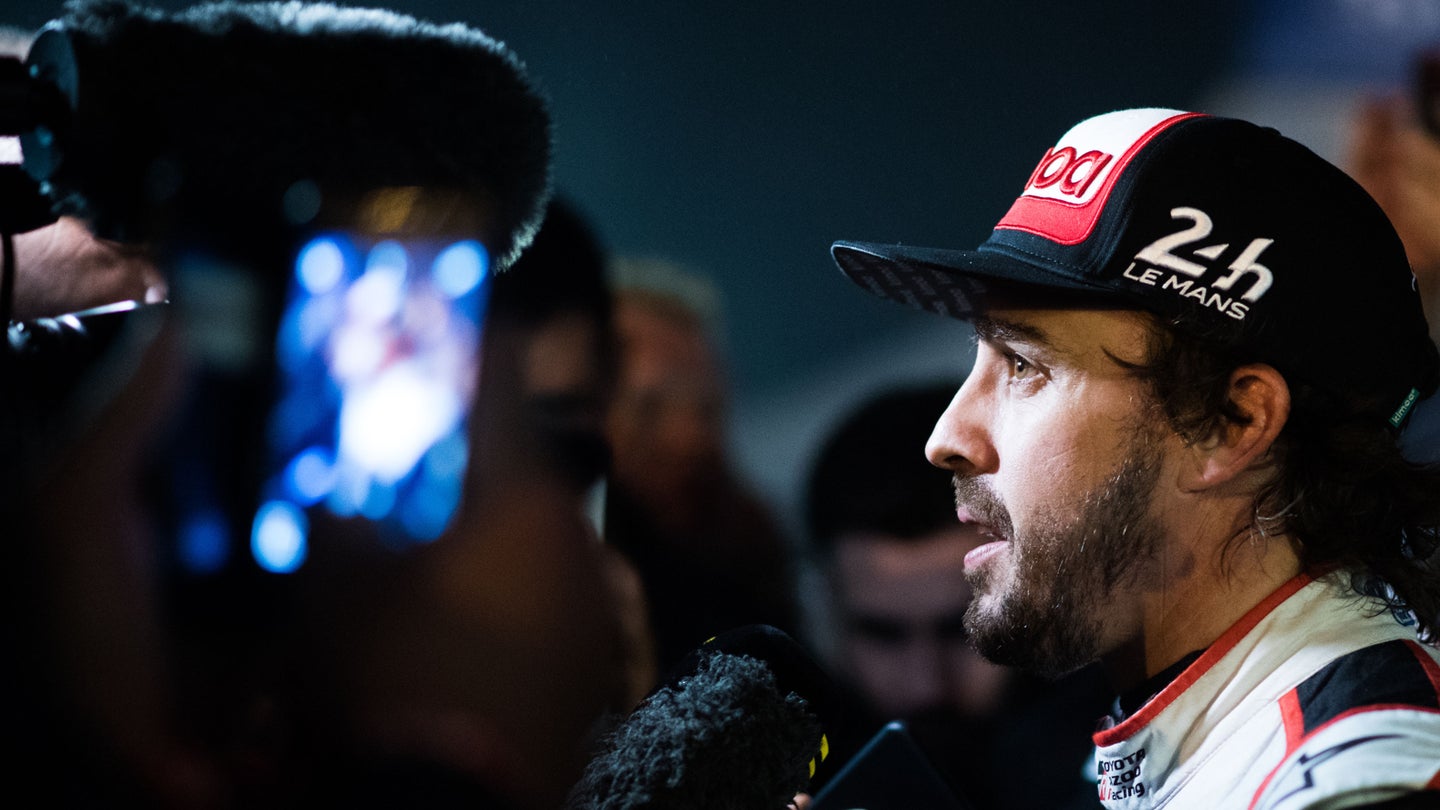 As Fernando Alonso seems set to find at Le Mans what he's lacked in Formula 1 in recent years—success—the Spaniard has declared that a possible victory in the famous 24-hour race "probably" won't affect his Formula 1 future.

"I don't think about it too much yet", Alonso said of his future plans to the press, explaining he wants to see how his headline-grabbing turn at Le Mans goes first.

Alonso is competing at Le Mans as part of his bid to win the prestigious 'triple crown' of motorsport, the honorary title for winning the Monaco Grand Prix (which he has done twice), Le Mans 24 Hours, and Indianapolis 500. The 37-year-old tried his hand at the Indy 500 last year, running competitively until a late-race retirement, but elected to have a shot at the 24 Hours of Le Mans this year as he signed-up with Toyota, which so far is the pace-setting team in the ruling LMP1-class as a dominant performance saw it secure pole position for the French classic.

Should he win Le Mans, the theory goes, Alonso could well turn his attention to a full-time IndyCar campaign and another assault on the Indy 500, the only remaining part of the 'triple crown' he would then have yet to win. These suggestions come amid reports his Formula 1 team McLaren is eyeing a tie-up with an established IndyCar team to run in the 2019 IndyCar Series season. Alonso remained coy when quizzed by reporters on McLaren's IndyCar plans, however. "I know the team is looking at the options there, but it is just a McLaren decision and a McLaren commitment because of the importance of North America, the market and the strategic decisions. So it’s not for me to be involved in that."

Although Alonso explained that he loves Formula 1 and enjoys racing in it, the Spaniard told Autosport that as far as his future is concerned, it's more about the sport's forthcoming path rather than McLaren's in particular.

"The biggest thing for me is the direction that Formula 1 goes. I don't think too much about how competitive you will be next year, because it's impossible to predict, it's just about the sport", Alonso elaborated, arguing Formula 1 currently "is a Constructors' Championship, it's not a Drivers' World Championship."

Alonso, a veteran of 300 Grand Prix-weekends and 297 starts, previously lamented that Formula 1 is 'predictable,' calling it sad that "There are different teams in different roles on the grid, but there is not much more the driver can do." Following his switch from Ferrari to McLaren after the 2014 season, Alonso has remained winless with the struggling Woking-based squad. Prior, at Ferrari, he finished runner-up in the Drivers' World Championship three times in five seasons. He last won a race in 2013 and his last championship title came in 2006 with Renault.