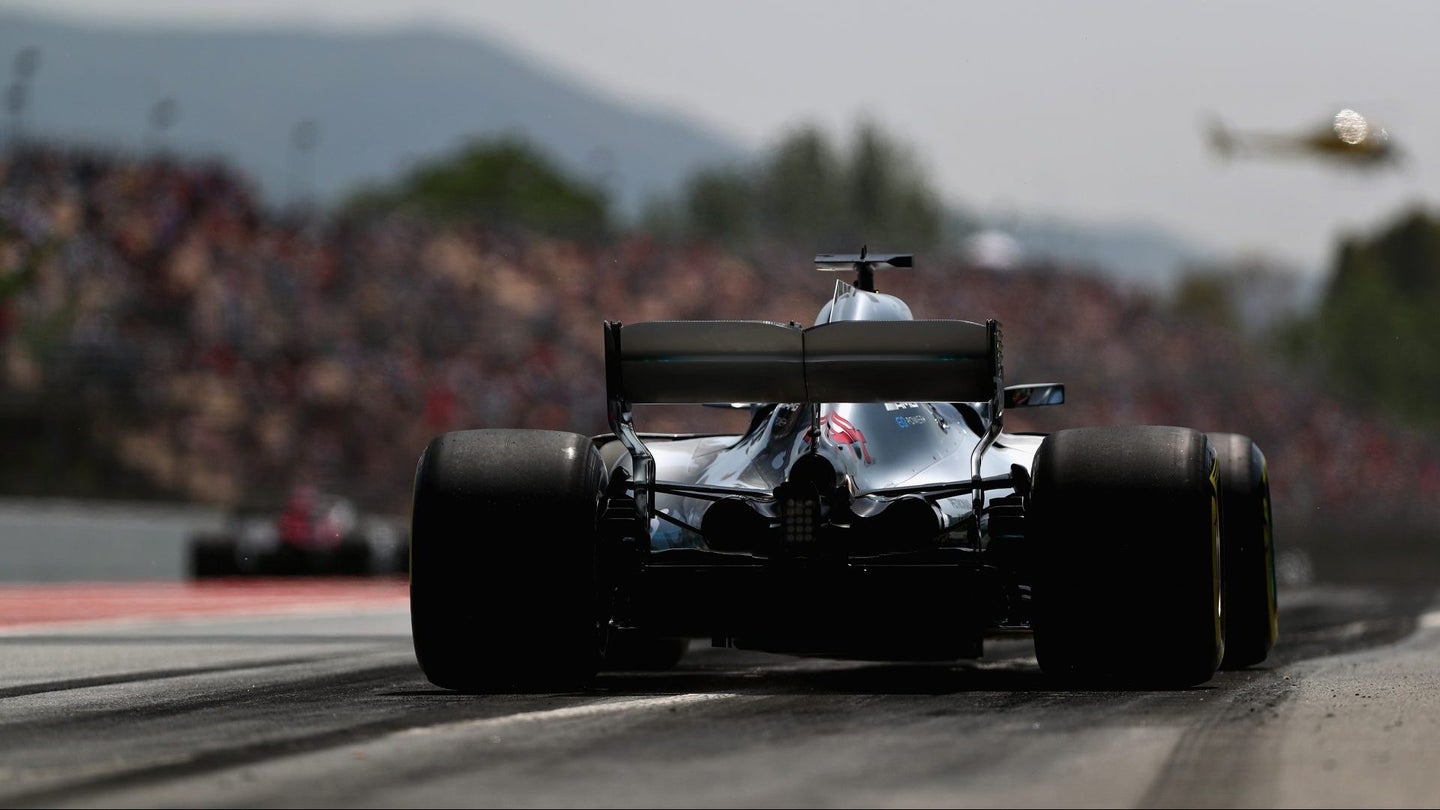 Sunday's Spanish Grand Prix was destined to be full of turmoil from before it began, courtesy of rain overnight that cut grip levels at Circuit de Catalunya. The rain threatened to return, with clouds hanging darker than the Catalan tarmac, and with the four race strong streak of safety cars both virtual and real, a monkey wrench looked certain to be thrown into the race's proceedings.

The red lights' exodus saw the red car of Sebastian Vettel push past Mercedes' Valtteri Bottas into the first corner, staggering the Mercedes-Ferrari running order. Low grip caused problems all around, but for none more than Haas' Romain Grosjean. A combination of low grip, a face full of dirty air from teammate Kevin Magnussen, and an evasive maneuver around the struggling Dane sent Grosjean into a spin, clouding Turn 3 in tire smoke. The Frenchman then speared across the circuit, into Renault's Nico Hülkenberg and Toro Rosso-Honda's Pierre Gasly, both of whom suffered race-ending damage in the collision. This marks Grosjean's third retirement in 2018, and the second of both Hülkenberg and Gasly.

Cleanup required a safety car, extending the streak of safety car (or virtual safety car) appearances to five this season. The safety yielded control of the race to Mercedes' Lewis Hamilton at the end of lap six, but pursuing Vettel stumbled, losing a chance to attack Hamilton on the pit straight.

Procession remained relatively peaceful until the pit stop war began with Ferrari hailing Vettel in for a set of medium tires after lap 18 for a 2.5 second stop. Mercedes reacted by accelerating Bottas, who pitted as a reaction the following lap, but a sluggish 3.9 second stop saw track position remain Vettel's, with both drivers behind Magnussen.

While Hamilton reported drizzle on his visor on lap 21, Bottas' pace surged, over 1.2 seconds faster than Vettel. Red Bull's Max Verstappen repeated Hamilton's complaint of rain around Turn 12 on lap 24, before dodging Ferrari's Kimi Räikkönen, whose power loss replicated that endured by the Finn on Saturday, ending his race—much to the chagrin of his biggest fan, who was a special guest of the Scuderia for this Grand Prix.

Hamilton himself pitted after lap 25, for medium tires. Force India's Esteban Ocon had a troubled stop on lap 30, with a problem inside the rear right wheel delaying his exit by over 20 seconds. Meanwhile, both Red Bull drivers had yet to pit, and Verstappen lorded track position over Hamilton until called to pit on lap 34, his teammate Daniel Ricciardo attended to the lap prior.

Ocon's bad luck continued with smoke spouting from his tailpipe on lap 41, speculated by SkySports commentators to be a hydraulic failure. This brought out the virtual safety car while Ocon's stricken VJM11 was hauled off the track, allowing Vettel a reduced-cost pit stop for another set of medium tires. Vettel exited the pits behind Verstappen, and later that lap, Verstappen would crunch his front wing against Williams' Lance Stroll, who was later accused by Red Bull boss Christian Horner of driving too slowly. Verstappen lost his left side wing endplate, which flew off the car once on the pit straight, and into the Force India of Sergio Perez.

Despite an off-track tour by Sergey Sirotkin, the VSC was cleared after lap 42. Perez elbowed past Stroll for the last scoring position on lap 44, and the following lap, Bottas posted the first known sub-1:20 of the race, at 1:19.944. A lap later, McLaren's Stoffel Vandoorne retired, propulsion lost out of the last corner.

Lap 59 saw Perez pass Sauber's Charles Leclerc to increase his team's points haul for the race. Ricciardo cut under the 1:19 mark on lap 61, but it meant little to the Australian, in a lonely P5.

Hamilton took the checkered flag on lap 66, becoming the first driver to score points in 30 straight Grands Prix, and further raising the bar for most consecutive race starts, with 213. While Bottas and Verstappen followed Hamilton to the remaining steps on the podium, Brendon Hartley's Toro Rosso-Honda creeped across the finish line with an apparent loss of power. Homeland heroes Carlos Sainz Jr. of Renault and Fernando Alonso of McLaren, in formation, flourished Spanish flags on the cool down lap.

Lewis Hamilton sprayed champagne while the driver of the day voting results confirmed his performance in the eyes of fans.