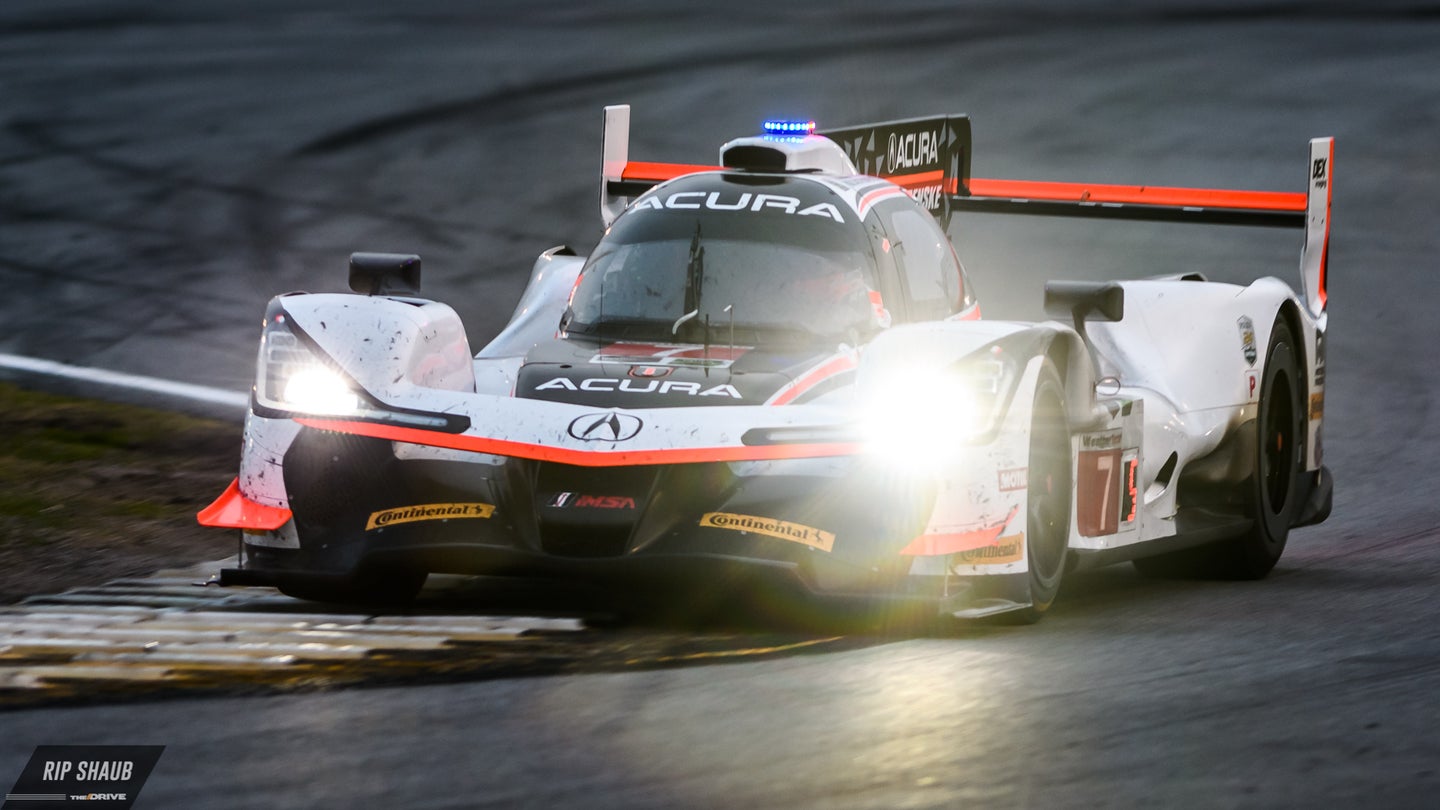 Helio Castroneves and Ricky Taylor capitalized on their pole position at Mid-Ohio to win Acura Team Penske's first IMSA race of the 2018 season. The two played a game of strategy and speed as the race ran caution-free, predominantly battling against their teammates in the No. 6 ARX-05 Prototype for the top step. Calls from team strategist Tim Cindric landed the duo in front with an hour and twenty minutes to go, providing plenty of cause for celebration as the American outfit touts its initial victory since returning to sports car competition.

Taylor, last year's IMSA WeatherTech champion, closed the race ahead of Juan Pablo Montoya with an eventual gap of 8.464 seconds. As a result, the contest concluded the same way every other timed session of the weekend did with a Penske one-two—each time the No. 7 car coming out ahead.

The mid-race call by Cindric to short-stop Taylor allowed him to go out on track ahead of the sister Acura. This came after Castroneves drove the early stint which saw him battle with Mazda Team Joest's No. 77 RT24-P driven by Oliver Jarvis. The two battled for the lead position until the halfway point in which Jarvis & Co. lost out and ultimately finished third, completing the podium—the first since the famed racing team joined with Mazda for the current IMSA campaign.

Mustang Sampling Racing's Filipe Albuquerque and Joao Barbosa preserved their points lead with a P4 result in the No. 5 Cadillac DPi-V.R. The Team Action Express drivers nudged out Wayne Taylor Racing who concluded the top-five 57.825 seconds off the lead.

The No. 55 Mazda of Jonathan Bomarito and Spencer Pigot was the only retirement of the Prototype field.

“We come here in Acuras for Acura’s home race and then to start the month of May with a legend (teammate Helio Castroneves), it’s just the start,” Taylor told Fox Sports 2.

Castroneves then contributed after his first-ever IMSA WeatherTech win: “This kid (Taylor) is unbelievable. He was on it and never lost his cool. Unbelievable. I was losing my cool, it’s the hardest thing to watch.”

Laurens Vanthoor and Earl Bamber piloted their No. 912 Porsche 911 RSR into Victory Lane after inheriting the lead from Connor De Phillippi in the No. 25 BMW M8 GTE. The switch happened with 33 minutes to go in the sprint event, overshadowing a strong strategy put into play by BMW Team RLL. When the checkered flag was flown, 1.673 seconds separated the two.

Porsche narrowly completed the race at the front after the Stuttgart crew was able to short-fill on its final stop. This allowed Vanthoor and Bamber to match their stablemates in the No. 911 entry who took home bragging rights at Sebring in March.

The pair of Chip Ganassi Racing Ford GTs finished fourth and fifth consecutively while they were quickly followed by the No. 911 Porsche of Nicky Tandy.

GTLM pole-sitter John Edwards was quickly dropped to the back of the field on lap one as his No. 24 BMW M8 GTE was forced off track by the No. 85 JDC-Miller Motorsports Oreca 07 Gibson of Robert Alon. He still managed to finish on the lead lap, however, though he and teammate Jesse Krohn's end result was P7.

“It was horrible,” Vanthoor joked to FS2. “The BMW (of De Phillippi) was chasing us with fresher tires and my tires were already destroyed with 15 laps to go, so I had to fight like crazy to stay on track and push."

The Belgian went onto say, “I was worried that cars were catching me. I was doing my best and tried to keep positive and finally, it worked. A lot of stuff went wrong along in-between, chances that went away, but now it’s done and I hope it’s the first of many.”

For the first time in North American competition, the Lexus RC F GT3 has claimed class victory. The 3GT Racing-ran No. 14 entry of Dominik Baumann and Kyle Marcelli delivered the car's inaugural victory on Sunday at Mid-Ohio, besting the hometown favorite No. 86 Acura NSX GT3 of Meyer Shank Racing.

Marcelli drove the opening stint before switching with Baumann in the pits, allowing the duo to leap toward the front of the Pro-Am category. As time advanced, Baumann created a healthy lead but fell under attack of Alvaro Parente in the ensuing MSR Acura. Despite the exceptional effort, Parente finished a mere 0.191 seconds off of the lead, landing his team a podium finish in their home race which was sponsored by its partner, the Acura brand.

Point-leader Paul Miller Racing completed the rostrum in third with its No. 48 Lamborghini Huracan GT3.

3GT Racing's second Lexus, the No. 15 driven by Jack Hawksworth, started on pole and conclusively finished in fourth.

Lawson Aschenbach's No. 93 MSR Acura then concluded the top-five.

Baumann confessed that the race win came from nothing short of full-effort. "It was just 100 percent every lap. I didn’t know what the gap was, but I’m so glad we did it. The pressure’s going off and it was such a perfect weekend.”