We would tell you not to feed the Honey Badger, but if he can smell a win, he'll just take it anyway. 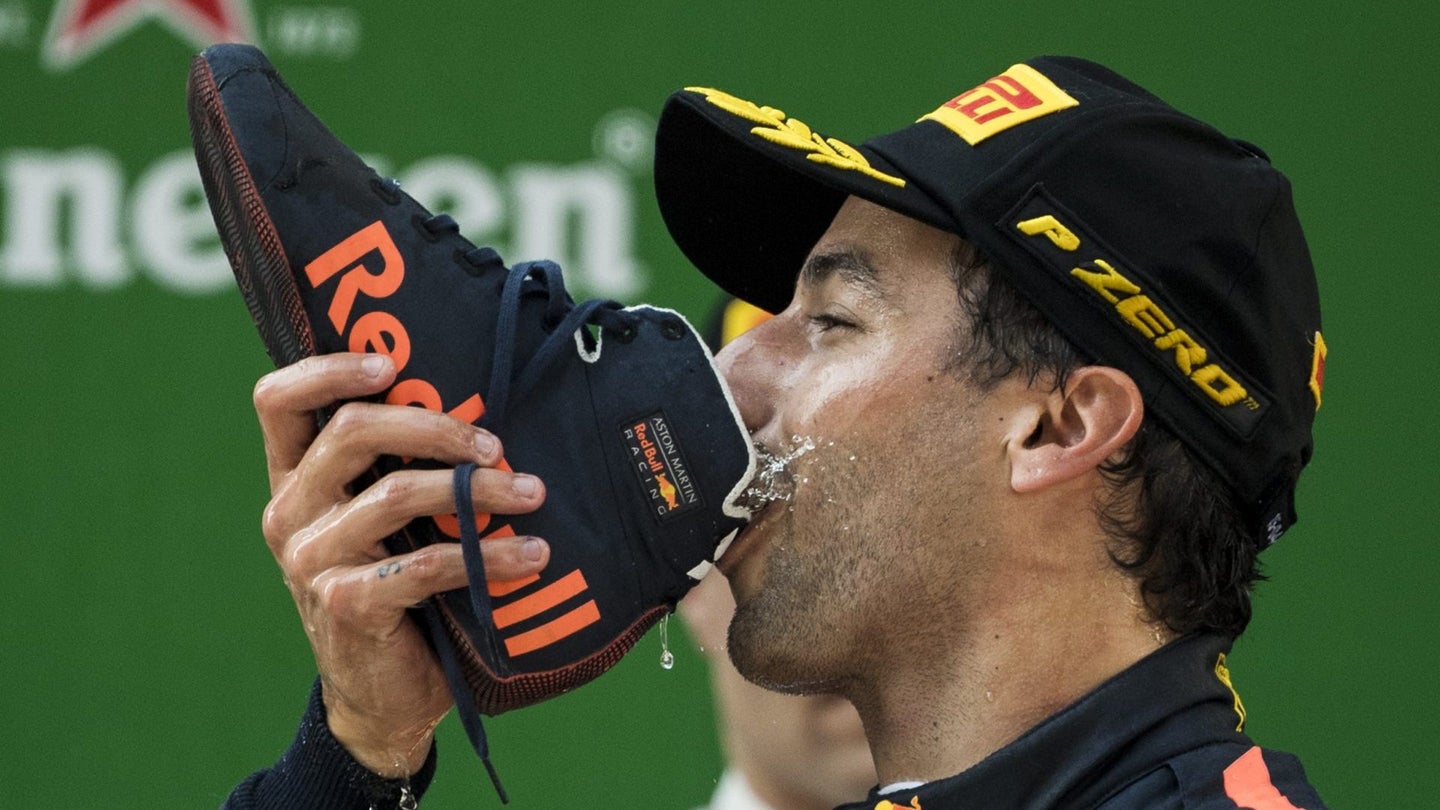 At the start of qualifying on Saturday, Daniel Ricciardo was sidelined by a turbocharger blowup in free practice. He managed to squeak into Q2 by the slimmest of margins, and later finished Q3 five places adrift of polesitter Sebastian Vettel. The weekend looked a wash for the Aussie, but as historic commentator Murray Walker once said, "anything can happen in Grand Prix racing, and it usually does."

The twenty-strong field sprung from the grid when the starting lights took their leave, which saw Valtteri Bottas and Max Verstappen leapfrog Kimi Räikkönen through the complexity of the first turn, Lewis Hamilton held up by a poorly chosen line. Sebastian Vettel, unchallenged, rocketed away from Bottas to a 2 second lead after as many laps, making the Grand Prix his oyster.

Red Bull Racing, its drivers operating third and sixth respectively, activated its risky undercut strategy after lap 17, double-stacking stops for Verstappen and Ricciardo. The frontrunners were caught off guard by Red Bull's bid for track position, its drivers exiting the pits on medium tires capable of finishing the race. Mercedes reacted immediately, bringing Hamilton in the following lap, and Bottas, a lap after. Ferrari's followup was less immediate, as it waited until lap 20 to pit Vettel, by which time Bottas had made up the gap, and Vettel exited the pits behind the Mercedes man.

Räikkönen was kept out as long as the team could use him as an obstacle for Bottas, his wake of dirty air handicapping his fellow Finn, who had to both scramble past the slowing Ferrari ahead of him and hold back the stallion behind. Bottas slithered past Räikkönen on lap 27 in the first corner complex, but nearly lost position again to a dummy overtake by Räikkönen into the next heavy braking zone, where Vettel was ready to pounce. It was only the arrival of the next high-speed corner that gave Bottas reprieve from Vettel. After the lap, Räikkönen changed to medium tires.

Though the plan was for Bottas to hold off Vettel for the remainder of the race, with no further stops planned, race-changing events arrived but two laps later. Not Charles Leclerc's spin into the gravel, which almost beached his car, but instead, a goofy collision between Toro Rosso-Honda drivers. Pierre Gasly collided with Brendon Hartley at the hairpin that punctuates the back straight, spinning his teammate, and lunching his own front wing.

The resulting debris caused concern enough for race officials to activate the safety car on the following lap, which Red Bull again capitalized upon, repeating its previous double-stacked pit stops, this time for the faster soft tires, rather than mediums use by the rest of the field (save for Renault's Nico Hülkenberg, who stopped for softs too.) After lapped cars relieved themselves of the condition, racing resumed when Bottas nailed a bootful of throttle earlier than expected, at the end of lap 35.

Ricciardo used his sticky new tires to plunge past Räikkönen into the hairpin at the end of the back straight on lap 37, and two laps later, Verstappen attempted the same on Vettel—with less success. Vettel went wide, and as Max is known to do, he jammed his foot in the door, only for Vettel to slam it on him. The two spun, losing places to Hamilton, Räikkönen, and Ricciardo. Vettel came off worse from the flubbed overtake, straightening up after Verstappen, and searing his rear tires in doing so.

Now without his teammate in the way, Ricciardo lay waste to Hamilton the following lap with a leap of faith on the brakes that would impress Felix Baumgartner, into the same hairpin at which he surprised Räikkönen three laps prior. Verstappen, recovering from his spin, eased past Hamilton a lap later. Ricciardo needed not wait for the braking zone to slip past Vettel, and used DRS to heave his Red Bull passed the Ferrari on the back straight, completing the move well in advance of the hairpin. Räikkönen returned fire for Ferrari, passing Hamilton on lap 43.

The situation worsened for Vettel, his worn medium tires proving too flimsy a defense for Hülkenberg's softs, and the German yielded to his countryman on lap 44. Next lap around, Ricciardo jammed his Red Bull into a space too narrow to fit a credit card, completing an overtake on Bottas for the race lead, to which he would hold on through the checkered flag.

Verstappen received the news on lap 46 that his antics earned him a ten second time penalty, to be applied at the race's end. He nevertheless circumvented Hamilton two laps later. Over at Red Bull's junior team, Toro Rosso-Honda, there were bigger problems than time penalties: Brendon Hartley garaged his car on lap 52.

All this time, Fernando Alonso gobbled the gap between himself and Vettel, whose rear tires were ready to go on strike, even more so than in Bahrain. On lap 55, Alonso eked his way around Vettel, about which Vettel was unhappy, bellyaching to his pit wall over the radio. Had Vettel phoned in the remainder of the race, he would have been pipped over the finish line by Carlos Sainz Jr., who, DRS fully open, finished 0.477 seconds behind.

Ricciardo's sixth Grand Prix win continues his streak of winning races started from outside the top three. He celebrated the win with the signature shoey on the podium (which he shared with a willing Red Bull team rep) while the votes for driver of the day were tallied up, which Ricciardo won. Deservingly.

Full Grand Prix results can be found below.