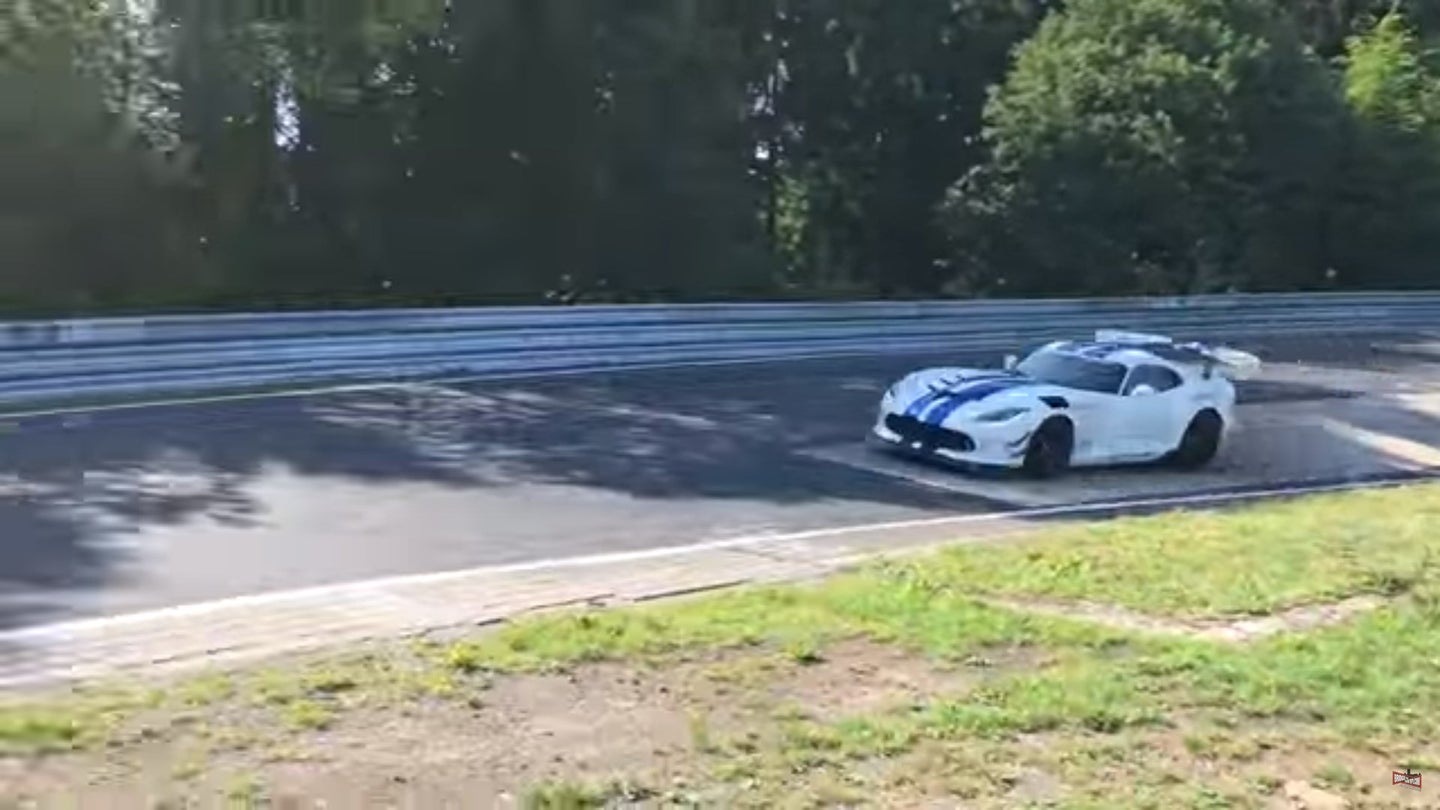 Not to be outdone by the Chevy Corvette ZR1, a team of privateershas brought not one but two late-model Dodge Viper ACRs to the Nurburgring to attempt to set a new production car lap record. It would be a fitting send-off for the Viper, which goes out of production on August 31. The YouTube channel Bridge to Gantry has spotted these Vipers on the track, confirming that the efforts to ship the cars to the Nurburgring has been successful.

Unlike the Corvette effort, though, this is an entirely private go at the record. Fiat-Chrysler has provided no sponsorship whatsoever. Instead, a GoFundMe and corporate sponsors have footed the bill. As we previously reported, ViperExchange has supplied two Viper ACR Extremes. Kumho also joined the effort.

According to a post in the Viper Club of America Facebook group, they will be running "the stock tires on the car. They gave us as many sets as we need." The GoFundMe raised $176,832—more than the $159,000 needed to cover the remaining expenses. Bridge to Gantry's video is proof that the team has arrived and begun their quest to retake the lap record, as promised.

The people involved are not being paid, but are volunteering their time and skills to retake the record. This includes Russ Oasis, who organized the effort and the GoFundMe, as well as drivers Dominik Farnbacher—who set the previous Viper record of 7:12:13 in 2011—and Luka Stolz, who has qualified in pole position for the 24 Hours of Nurburgring. These drivers know the Viper and know the Nurburgring. If anyone can help the Viper claim the record, it's them.

Since we still don't know the Corvette ZR1's lap time, we can only speculate whether either car will break the current production car record of 6:52.01 set by a Lamborghini Huracan Performante earlier this year. The weather for both the ZR1 and the Viper looked to be warm and sunny, which should reduce the advantage of the Lambo's all-wheel-drive. It's a tall order to drop more than 20 seconds off the previous Viper record, but the Viper ACR Extreme is much faster than the 2011 car. All we can do is wait until the times of both the Viper and the ZR1 are released to know which of the three cars is fastest.