Celebrating Aloha Wanderwell, the Amelia Earhart of the Car

Celebrating the life of adventuress who blazed her own road 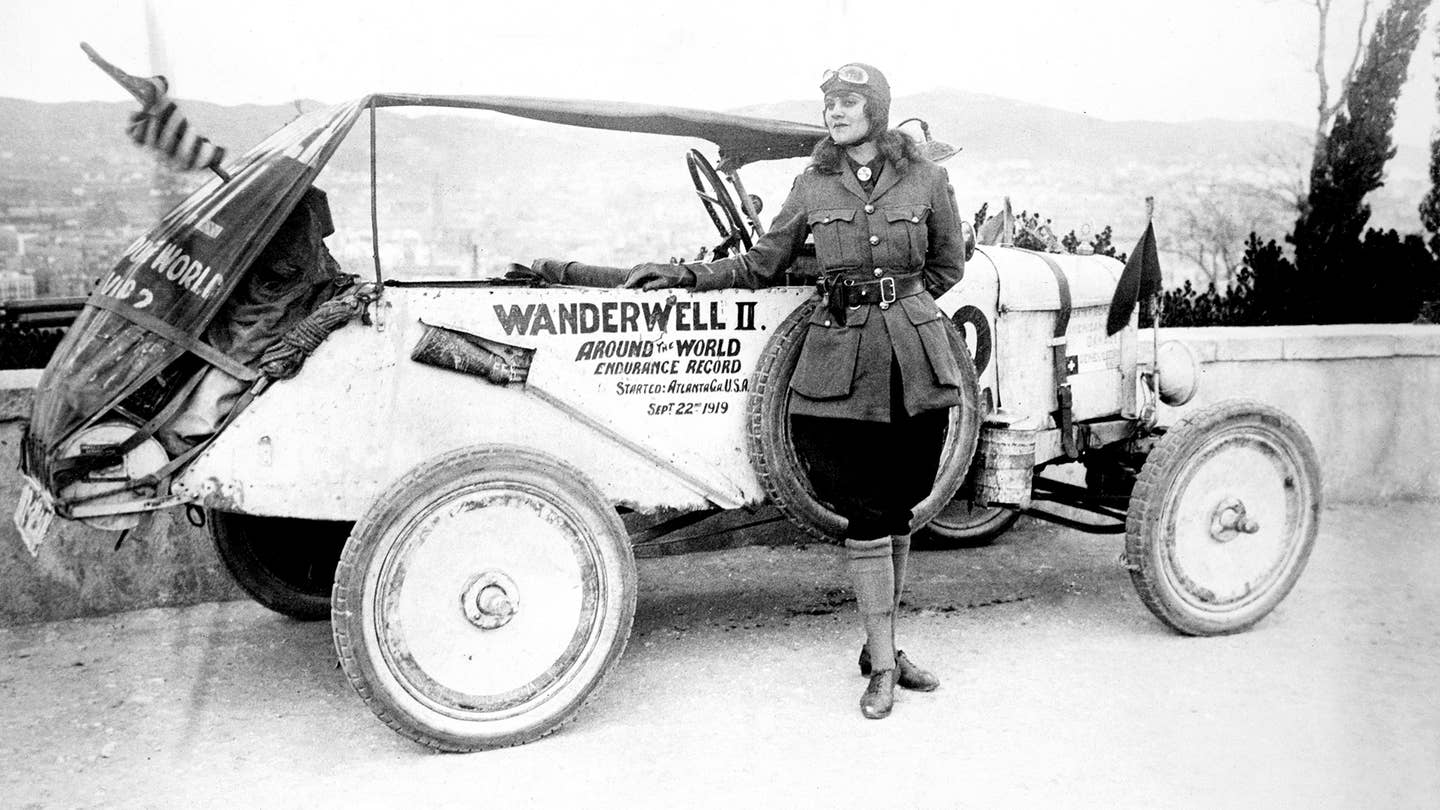 Paris, 1922—Pen in hand, sixteen-year-old Idris Hall stepped from the crowd and away from her past. At six feet tall, she stood head and shoulders above the dapper little man in the Boy Scouts uniform, the one they called Captain Wanderwell. She asked for his autograph, then petitioned him for a place in his band of merry nomads, the Work Around The World Expeditionary Force. Ten years and thirty-five-thousand miles later, the first woman to drive around the world by car was in Hollywood, pitching a film, when her husband was shot dead aboard their yacht. Adventure, exploration, danger, and murder: this is the life of Aloha Wanderwall.

Born on October 13, 1906, in the Canadian prairies, Idris Hall grew up on a broad and quiet ranch on Vancouver Island. When the first World War broke out, her Yorkshire-born father, Herbert Hall, answered the call made to the colonies, and voluntarily joined the Canadian Expeditionary Force. A lieutenant, he was killed at the battle of Ypres in 1917.

The eleven-year-old Idris seems to have inherited her father's courage and conviction. Exasperated with trying to manage her fierce, tomboyish daughter, Idris's mother sent her to France, to a boarding school in a convent. It only seems to have made her more determined to escape, and she fled the place a few years later, to Paris, where she had her fateful meeting with Captain Walter Wanderwell.

The Captain was a fascinating character. Born Valerian Johannes Piecynski in Poland in 1897, he was a former Navy man. Endlessly charming and utterly restless, he was jailed as a spy during WWII and married a chorus girl in Seattle upon his release. His motorized expedition, which would spend four years wandering the globe, was ostensibly to drum up publicity for a police force intended to patrol the globe in support of the newly formed League of Nations. (Herbert Hoover thought he was trying to recruit a private army, and had him shadowed by agents.) He had a string of affairs, and it must have been with little surprise that his then-wife, Nell, found herself abandoned for a statuesque blonde her husband had dubbed "Aloha."

The Work Around The World Expeditionary Force was a mix of endurance racers, wealthy and bored socialites, and soldiers of fortune. The money came from everywhere: private coffers, paid public speaking engagements, theatrical showings of the films made by the crew as they toured the world. There is even some evidence to suggest that corporations were involved, money coming from the likes of Ford and Standard Oil, at a time long before sponsorship as we now know it existed.

The team used a pair of Fort Model Ts, heavily modified for the journey. The bodies were constructed of riveted plate steel, fitted with exterior rifle scabbards, and solid steel discs took the place of the wooden-spoked wheels. With Rucksteel four-speed rear transmissions supporting the standard Model T planetary gearbox to give a greater range of ratios to handle rough terrain, the two machines looked like armored cars.

Aloha Wanderwell was no mere pretty sidekick for the Captain's wandering eye. She must have been paying some attention during her convent education, because she could speak French, Spanish, and Italian, and also picked up Russian, Chinese, and Japanese during her travels. She drove the second of the two Model Ts, ran the camera and appeared in the films, helped drum up business in the towns they visited, and put her shoulder to the wheel when the situation required.

She was like an earthbound Amelia Earhart, if not even more daring. In one memorable excerpt from her memoirs, she finds herself captured by Chinese Bandits some time after the expedition drove their Fords along the Great Wall. Her escape is made thanks to the goodwill of the bandits, who are charmed by her instructing them on how to properly set up a machine-gun nest and field-strip a belt-fed automatic weapon.

Over the course of a decade, Aloha Wanderwell traveled through forty-three different countries. She was present when King Tutankhamen's tomb was opened. She is rumored to have joined the French Foreign Legion in disguise, and certainly engaged in combat with Arab irregulars in desert warfare. She was made an honorary Colonel in the Siberian Army and witnessed food riots in Weimar Germany. She met movie stars like Douglas Fairbanks, appeared in dozens of hand-cranked 35mm films, spent years in the jungle. She was a sort of mix of Lawrence of Arabia, Indiana Jones, and Greta Garbo.

Wanderwell married the Captain in Riverside, California, in 1925, and had two children with him. Seven years later, he was murdered aboard an ex-rum-runner schooner, one that he was converting for a South Seas expedition. The murder has never been solved, and Aloha wasn't above suspicion despite a watertight alibi. The media had a field day when she remarried, just over a year later, to a former cameraman from the expedition. Perhaps Captain Wanderwell's appetites caught up with him; the ship's name, after all, was theCarma.

Whatever the case, the mysterious death of her former co-adventurer didn't slow the adventuress down at all. Now Aloha Wanderwell Baker, she continued touring with her new husband, making films and ensuring that her legacy would live on in museums. A movie she made while living among a tribe in the Amazonian basin is considered one of the oldest visual recordings of Stone Age peoples. It resides in the Smithsonian. The couple later settled in Cincinnati, where Aloha became a radio and print journalist.

Sadly, the Model T that took her so far around the world does not survive today. It was donated to the Ford museum as a historical artifact, but it later emerged that the occasionally callous Henry Ford consigned it to the crusher in 1942, as scrap metal for the war effort. Aloha didn't find out until 1979, and she was heartbroken by the news.

"That Wanderwell II was scrapped for war metal is an ironical waste indeed,” she wrote to the Ford Museum's curator, John Conde. "For 1942 and all through that war, I gave orientation film programs in colleges and art institutes, and was in and out of Detroit, constantly in touch with the Ford Public Relations for it. I can never have the satisfaction of seeing again the object that had dominated the very best years of my life.”

Aloha, Idris that was, died in June of 1996, her story long faded from public memory. However, her grandson has recently collected her archives and made them available online. She even has her own Twitter feed.

Our world is far more crowded these days—it simply wouldn't have enough room for someone like Aloha. And yet there she is, astride her Indian motorcycle inside Rome's Coliseum, looking up as the ruins frame the sky. She grasped adventure, instead of waiting around for it. She stepped from the crowd, pen in hand, and wrote her own destiny.