This Belgian Man Turned His Ferrari Into a Mailbox

Being dismembered and trapped in Belgium is a special circle of sports car hell. 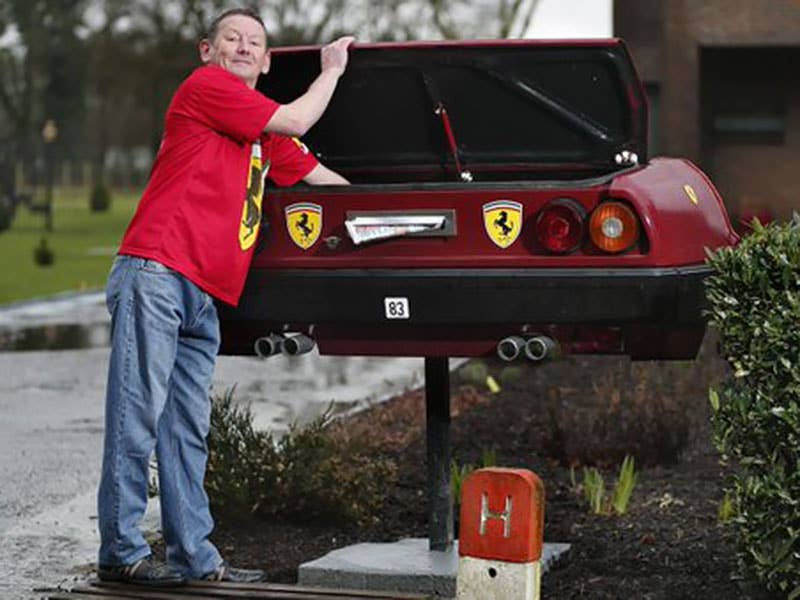 In the ‘rari! The ‘rari! Put my mail in the ‘rari. That’s what we presume this Belgian man with a Ferrari Mondial mailbox shout-sings at his mailman, perhaps alternating with Gelieve, beschouw mijn grote mailbox gemaakt van bottom een verguisde sportauto's! (Or, “please regard my big mailbox fashioned from a maligned sports car’s bottom.”) Either way, one Nico Van Lee of Genk, Belgium, turned his feeble old 1982 Ferrari Mondial into a large mailbox and installed it outside his mother’s house. Because, that’s what mom always wanted: Your car’s ass, mounted in her shrubbery.

Several factors led Nico to transform the Mondial, roundly acknowledged as Ferrari’s worst effort, from an Italian sports car into a receptacle for electric bills. He found the car in Britain, a right-hand drive model; because Belgian motorists drive on the right, passing and visibility were difficult. The the car was also high-mileage and generally worn. So, when the gearbox crapped out—a $7k job, at best—Nico took the Mondial off the road and started scheming up alternative uses for his decrepit Ferrari. In the end, he sliced off 18 inches off the car, leaving a five-foot wide trunk/postal box. Should passers-by not recognize the chopped-up Ferrari, Nico applied two large Ferrari decals between the rear lights.

Yes. Good. Another Ferrari Mondial becomes a lawn ornament. But, hey, at least this one’s doing something.