Holograms and bookshelves may be coming to an autonomous vehicle near you someday. 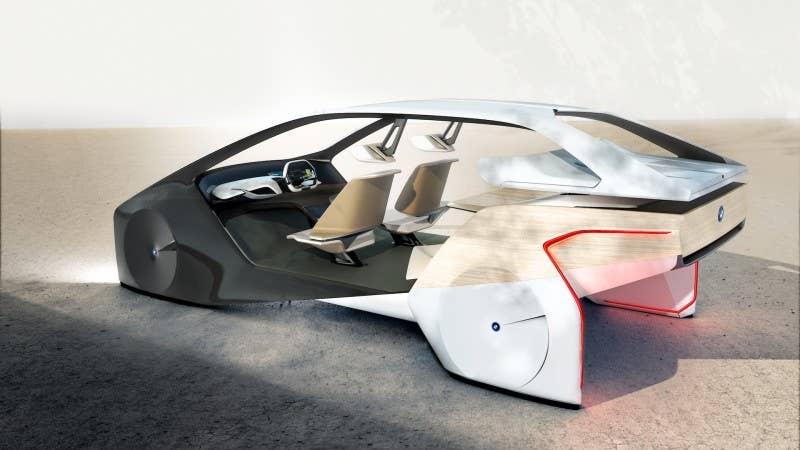 Today at CES, BMW showed off a new conceptual design that represents what automotive interiors could look like in the self-driving car era: the BMW i Inside Future sculpture.

As the word "sculpture" implies, the BMW i Inside Future is less of a traditional concept car and more a piece of 3-D artwork–albeit one with a purpose. It features a panoramic display projected above the center stack console area that utilizes a touch-less control system called HoloActive Touch, similar to BMW's Gesture Control technology already found in the company's production cars.

The Drive covered HoloActive Touch in detail when BMW announced it last month, but in a nutshell, a camera monitors the driver's hand and keeps track of his or her fingertips to know when the person is attempting to select something on the projection. When scrolling through menus, the driver feels feedback through ultrasound waves. We imagine this would feel similar to the vibration iPod users used to feel when scrolling through their music libraries, or the way the newest MacBook Pro or iPhone 7 use haptic feedback to replicate the feeling of a moving trackpad or button. (Can you tell we use a lot of Apple products?)

As has become pretty much the norm in autonomous vehicle concepts nowadays, the interior has a steering wheel that folds into the dashboard when the car is in autonomous mode. For those in the back, there's a ginormous screen in the backseat, tons of reclining room for those long driverless road trips, and, in a weirdly analog touch for a future-focused concept, a bookshelf. (At least it doesn't have any built-in selfie cameras.)

While it may be the most visually interesting part of BMW's CES exhibit, the i Inside Future isn't the only news the carmaker made today. BMW also announced that it will be bringing around 40 autonomous 7 Series sedan test cars to roads in the United States and Europe as part of its partnership with Mobileye and Intel.