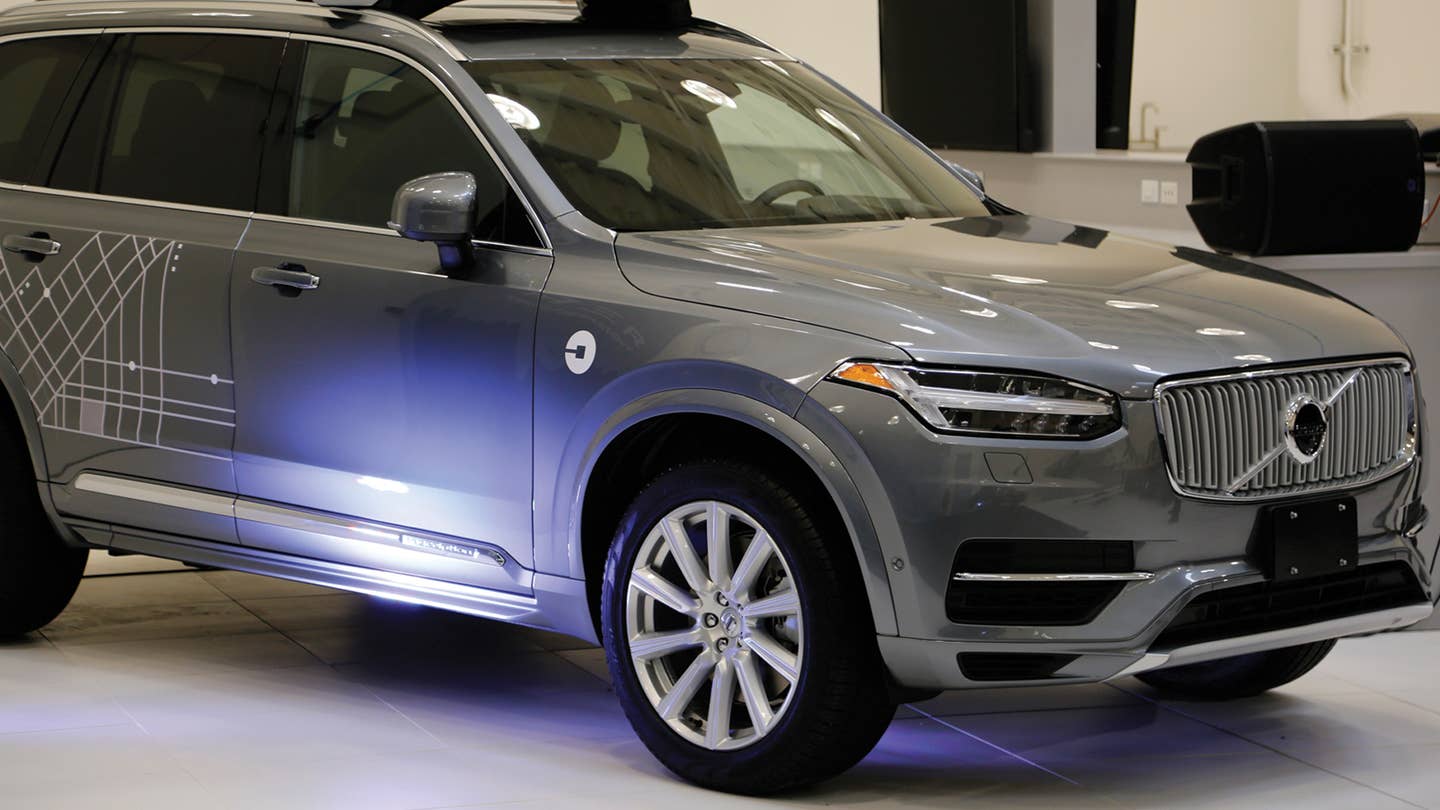 Today, Uber announced it will begin testing a fleet of autonomous Volvo XC90s in San Francisco by offering free rides within the city to a select group of users. That's news to the DMV, which notes that neither Volvo nor Uber are licensed to test vehicles equipped with self-driving technology on public roads within the state.

"I know that they’re not licensed as others are," one DMV employee, who licenses vehicle manufacturers with the Autonomous Vehicle Program, told The Drive. "Is it legal? I doubt it."

That's not how Uber sees it. The company's argument is that, since there is a driver behind the wheel that can take over if necessary, it's technically not a self-driving car. Anthony Levandowski, head of Uber's advanced technology group and former CEO of Otto, a company purchased by Uber for the autonomous technology used in its vehicles, issued a statement explaining that company believes "the rules apply to cars that can drive without someone controlling or monitoring them. For us, it’s still early days and our cars are not yet ready to drive without a person monitoring them."

But that's not what California's laws, which are pretty clear on this subject, stipulate. Vehicle Code Section 38750 says that a manufacturer of autonomous technology must apply for an Autonomous Vehicle Testing (AVT) license and be approved by the DMV to test a vehicle in autonomous mode on public roads. That means that even if there is a person behind the wheel of a car, the company needs a license to test the vehicle in autonomous mode.

Volvo is licensed as a manufacturer in California, but not as an Autonomous Vehicle Tester. A Volvo spokesperson explained that its role in Uber's project is to provide engineering collaboration and support for the vehicles.

"Uber is conducting the test and is responsible for where the pilots take place. As a result, we do not have any insight into Uber's interaction with state agencies or the requirements to run pilots where they've chosen," Volvo wrote in an email in response to The Drive's questions.

The Swedish automotive manufacturer's North America operations are based in New Jersey, which does not require special licensing for autonomous vehicle testing on public roads. The California DMV Office of Public Affairs issued the following statement:

"The California DMV encourages the responsible exploration of self-driving cars. We have a permitting process in place to ensure public safety as this technology is being tested. Twenty manufacturers have already obtained permits to test hundreds of cars on California roads. Uber shall do the same."

Even if it's patently illegal, it's not clear what penalties Uber could face should it be caught testing without a license. Testing an autonomous vehicle isn't a moving violation, but the company could still face a fine, and potentially even jail time for repeated offenses, says one DMV employee. But no one knows if the penalty would to the "driver", or the company authorizing its use. The DMV Public Affairs office didn't respond to questions pertaining to penalties for not complying with the state's vehicle codes; The Driveemailed Uber about its plans to apply for a license, but did not receive a response at the time of publication.

Without an AVT license, the company doesn't have to show the state that its vehicles have the requisite hours of testing to be considered safe for public roads, or that it has the requisite $5 million insurance coverage. Uber also won't be obligated to report accidents to state authorities. As of December 8, there were 20 companies that have received AVT licenses from the DMV, including Nvidia and Comma.ai.

Google recently spun out its self-driving car division from X labs and into its own standalone mobility company, Waymo. It's rumored to be starting a ride-hailing business with partner Fiat-Chrysler using a fleet of electric Pacifica minivans outfitted with Waymo's autonomous platform. However, unlike California, Michigan doesn't require a driver behind the wheel of the vehicle, making it easier—and legal—to test the technology on its public roads.

BLADE Helicopters is Uber for Super-Rich People and Mark Higgins Dominates the Isle of Man TT: The Evening Rush

Plus, a bluetooth-enabled padlock and tasty suds from Coast Brewing Company.