Could Your Personal Data Subsidize the Cost of a New Car?

Your data is worth money. Don’t give it away for free to the car companies. 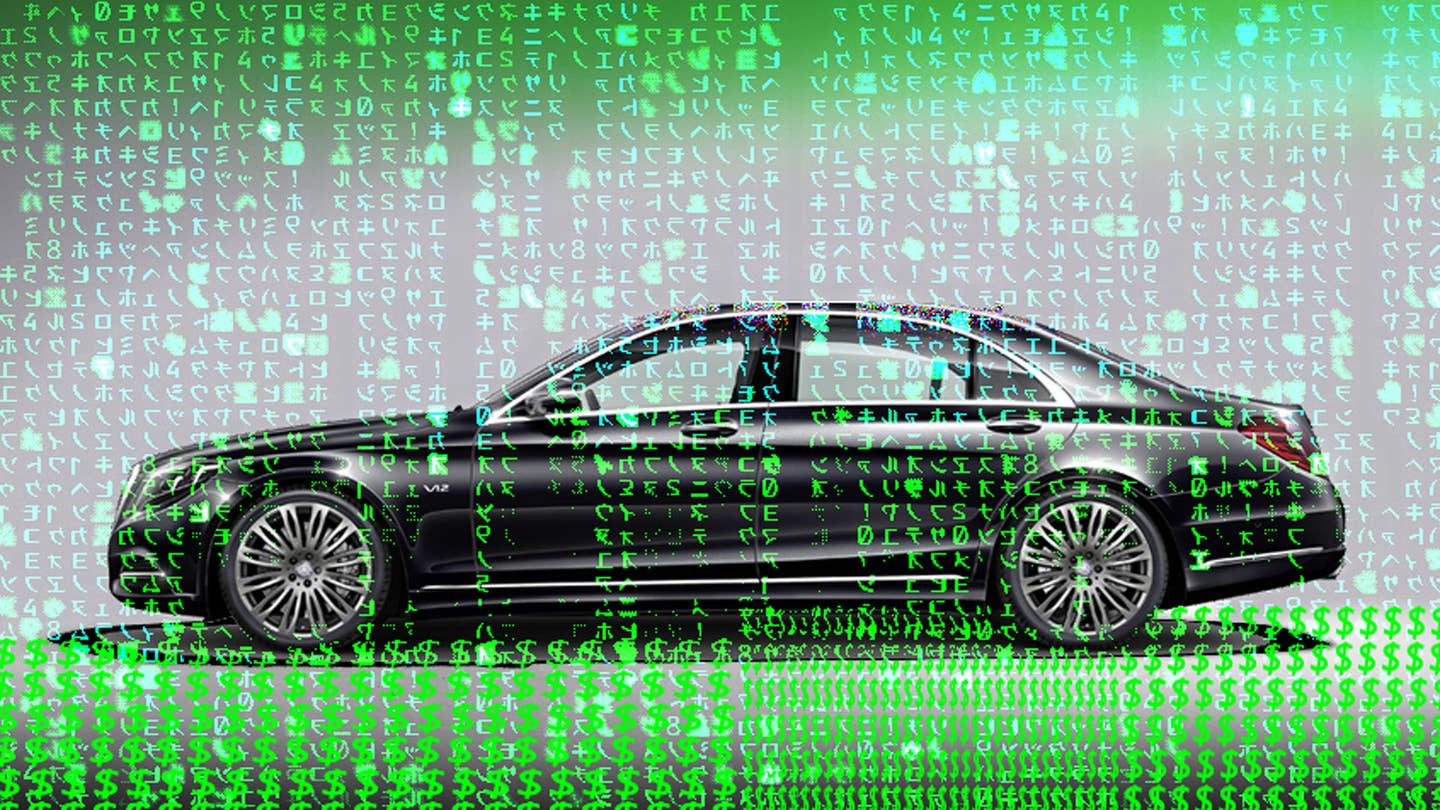 Personal data is big business, and your car is full of it. Most modern cars can potentially track your location, thanks to GPS; your preference in music, thanks to your choice of satellite radio stations; how fast you're traveling (modern throttles and speedometers are controlled electronically); even whether it's raining where you are (ditto the windshield wipers). That's to say nothing of the trove of self-diagnostic data—tire pressure, emissions calculations, miles per gallon, etc.—the vehicle collects in real time. Plus, a large number of new vehicles are equipped with a built-in cellular data connection; so many, in fact, that during the first quarter of this year automobiles became the fastest-growing category of new devices connecting to the country's cellular network, surpassing even mobile phones.

The idea that your car can (and does) record certain details of your trip is nothing new, but most of the conversation has so far focused on issues of privacy. Let's throw that angle out the window for now, if only because that genie is out of the bottle, and consider instead that personal data has become the de facto currency of the Internet Age, subsidizing everything from free search engines to cheap cell phones. If your vehicle is already collecting this data, and manufacturers stand to profit from it, shouldn't you see something in return? Like, for example, several thousand dollars off your next new-car purchase?

A quick primer on the value of data: User-generated statistics, as opposed to forecasts, are of tremendous value to various businesses, but most of all to marketers, who pay big bucks for it so they can figure how to best target potential customers based on their daily habits and preferences. Facebook and Google are free services for the end user precisely because the data on what people like, post, pin, and search is so profitable; Facebook made $17.93 billion in 2015, an increase of 44 percent over 2014 revenues, while Google brought in approximately $75 billion over the same period—the bulk of which, about $67 billion, came directly from the company’s search-based advertising services.

“If I had told you a decade ago that the search-ads business would be worth billions within ten years, you would have said I was full of shit,” says John Ellis, founder and CEO of John Ellis and Associates, a consultant for OEMs, Tier 1 suppliers, and investment advisory firms at the intersection of automotive, software, and mobility. “The notion that people would scratch and fight to buy a word—any word—and do it every second of every single day to gain insight into what consumers want and how they think was ridiculous. But that’s exactly what happened.”

The information gleaned from your daily routines is equally valuable, according to Matthew Hogan, co-founder and CEO of Datacoup, a company that pays users for access to their social media accounts and debit and credit transactions. “Data culled from your activities provides more actionable insights than any other,” Hogan says. “The data is more accurate; self-reported information is subject to fraudulence, subject to being incomplete, subject to a lot of things. But give a health insurance company access to your Fitbit and spending history and it can see that you're active, running 40 miles per week, and that you eat healthy, spending all of your money at health food stores like Whole Foods rather than fast-food restaurants like McDonalds." At that point, Hogan says, the company truly knows, rather than trusts, that you're worthy of a low-premium policy.

Now think about how much an observant vehicle could tell someone about your daily routine: how long you commute, and when, and the location of your office; which restaurants and grocery stores and malls you frequent; even how hot you like your seat and how loud you like your music. All of which, according to Hogan, "can be valuable well beyond the boundaries of the automotive business."

All of this begs the question: Are car companies already profiting from this data? We reached out to 13 of the major automotive manufacturers with this question; only Volvo was willing to comment on the record, with a company spokesperson saying, via email: “Simply put, we don't have any plans regarding this. The car does have the capacity to record different pieces of information, but it is not shared with Volvo or anyone else. The customer owns all of the data in our cars.” Another respondent who wished to remain anonymous answered that "data gleaned from the vehicles is with the consent of the customer, and is only used to improve future products."

There's no reason to think the market will stay this way, if only because there's such widespread precedent. Take mobile phones: When you buy a cell phone plus service through, say, Verizon, you agree to let the company use the data generated by your location, Web searches, app usage, and more. Even simple phone calls are a gold mine—location of caller, time and length of call, the number of calls per day or month. The data generated by your mobile phone is sent to an internal database and matched with demographic information about you from various companies, including information services giant Experian. The data is then stripped of any personally-identifying information, aggregated into categories, and placed into reports for Verizon clients. The combination of phone activity and demographic information paints a revealing portrait of Verizon subscriber habits for marketers—and is one reason Verizon is willing to sell you a $600 iPhone 6S for $99.

Ellis says that the automobile could be a similarly valuable data source. According to his market research, an individual's vehicle-supplied personal data could be worth up to $5,500 per year. "That's how much my automotive industry clients would pay for it, depending on what type of data is being sold," he says. "Knowing that it's raining in Mobile, Alabama is more valuable than simply having a forecast that says there's a 50 percent chance of rain in Mobile"—and that's just information a car can generate today. As cars become more sophisticated and vehicle-to-vehicle and vehicle-to-infrastructure technologies improve, the scope and scale of vehicle-generated data could skyrocket. And with it, the value.

HOW IT COULD WORK

Imagine you're sitting in a dealership and have just settled on a purchase price for a new BMW 428i Coupe. Then, Ellis says, "the salesperson says, 'We'll give you $X off the cost of the car if you sign over the rights to all of the data about weather that your vehicle collects throughout its lifecycle. Are you interested?'" The salesperson could then offer you similar deals for data involving traffic, maintenance, driving behavior, and so on, leading perhaps, Ellis says, "to the virtual disappearance of the retail asking price altogether—you release the data, allowing the buyer to legally transact it in public, and you get the car without deleting your bank account by one cent.”

A "free" car sounds too good to be true, but even if you calculate using the mobile phone model as a rough guide, you're still driving off the lot in a $42,000 vehicle for around seven thousand bucks. As for the privacy issue, it's already going away on its own thanks to a younger generation made up of individuals that understand that transactional value of their data, and even see some benefit to being targeted with exacting attention to their specific needs and wants.

"Most people think they're getting a great deal," Hogan says of his cash-for-data business. "[You get] a more personalized digital experience, and the cost is giving up the rights to the byproducts of your technological existence."

However you feel about the cost, monetary or otherwise, of allowing companies access to your personal information, one thing is for sure: There's too much money to be made from your car's data for it to be just left on the table. Someone is going to profit from it, likely sooner rather than later. It's your car's data—shouldn't that someone be you?