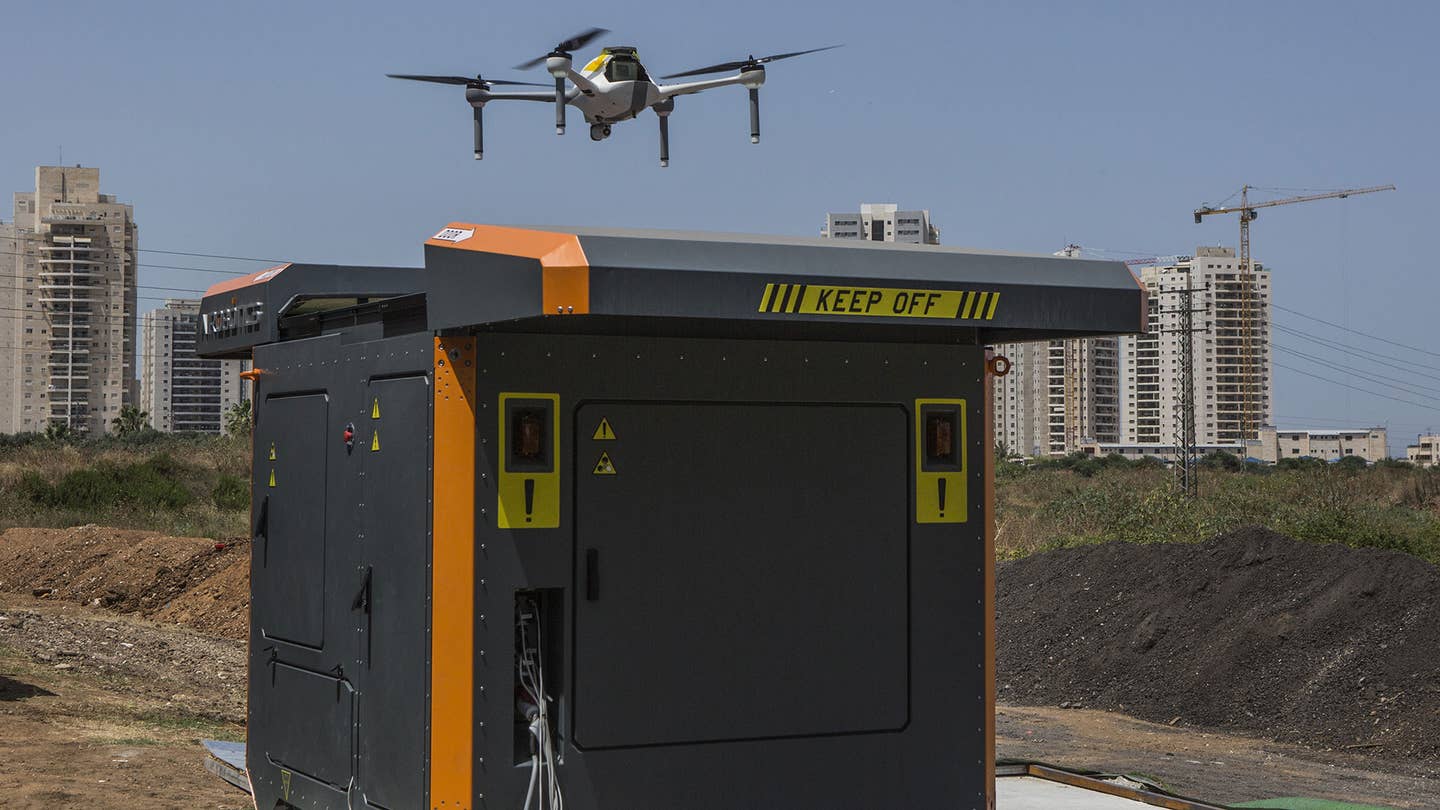 Tel Aviv-based manufacturer of unmanned aerial vehicles Airobotics has revealed a potentially revolutionary new system of automated industrial drones—essentially, drones that, once set up, can take care of themselves without need for human intervention.

The system, developed to perform rote tasks like aerial surveying, mapping, and perimeter observation, is comprised of three parts: A commercial dumpster-sized docking station, known as the Airbase; a 15-pound, 70.5-inch wide UAV called Optimus ; and a software package that controls the entire system. Freed from flying duty, humans only need to program the drone’s route and mission. After that, they just have to watch the real-time video and process any data the Optimus streams to a terminal. When it’s time to recharge, the Optimus returns to the airbase to be lowered inside, where a robotic arm swaps out the battery—and the payload module if necessary.

The Optimus drone can perform a wide range of tasks. Bloomberg reports that the Optimus, which can carry a 2.2-lb payload for up to 30 minutes, comes “with mapping and photographic capabilities,” but other modules stored in the airbase can include those for infrared imaging, and gas and chemical detection.

The biggest advantage of the almost-entirely autonomous vehicles is dealing with repetitive tasks. Monotonous jobs can be done with digital accuracy and without the hefty costs of training and maintaining a team of pilots. Airobotics has been in proverbial stealth mode for two years, as mineral and chemical producer Israel Chemical Ltd. has beta-testing the product for the company. According to Israel Chemical, which has been beta-testing the system for Airobotics for two years, the drone can measure the volume of the company’s stockpiles in a day—one-sixth the time it previously took.

Like the Optimus drone during a launch, Airobotics intends to keep on rising. The company has received $28.5 million in A- and B-round funding from a consortium of Silicon Valley investors, and plans to have 25 of its autonomous drone systems in commercial use by the end of the year. The company has more than two dozen competitors in the same space in Israel alone, but there'e plenty of room for all of them. The global market for just agriculture-centered drones is expected to explode into billions in revenue by 2021, with farmers already buying individual UAVs costing from $2,000 to $160,000 to manage their fields and harvests.