Everyday carry, or EDC knives, may be small and compact, but they are one of the most practical tools you can own. Whether you’re in need of a knife to help you open letters and boxes or are planning a camping trip, an EDC knife is always useful. It is more powerful and reliable than a pair of scissors. Here are the best EDC knives for everyday use. 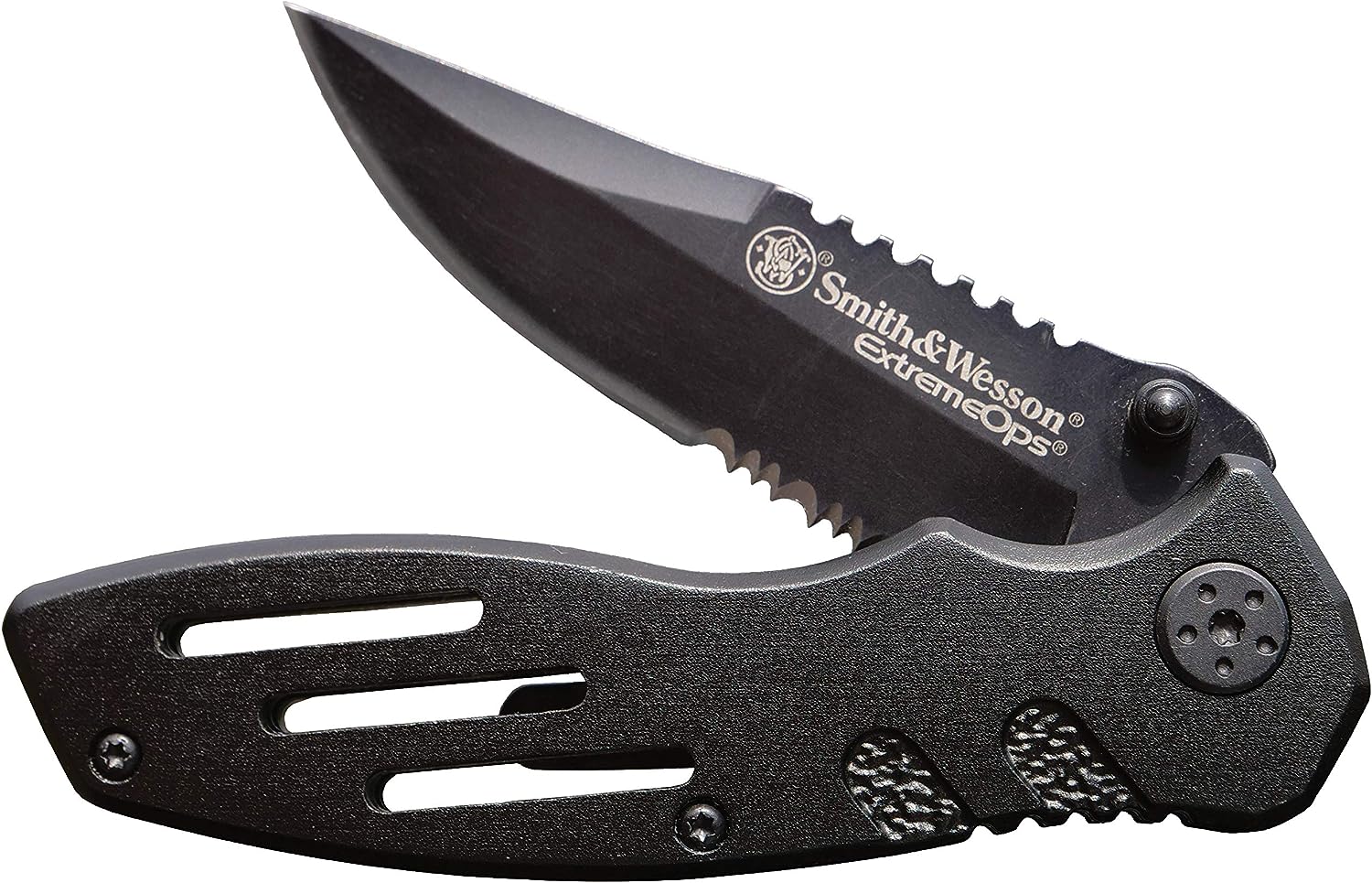 This 7.1-inch long knife features a 3.1-inch long blade and weighs 3.5 ounces. The blade is made out of a reliable black oxide high carbon stainless steel.

This frame lock knife features a contractor-grade replaceable utility blade. The blade is easy to clean, is lightweight, and opens effortlessly. The knife is perfect for everyday carry.

This folding pocket knife provides quick one-handed deployment and locks easily with a liner lock. It comes with a pocket clip for easy and safe carrying.

Benefits of an EDC Knife

This is an everyday carry knife that uses a pivot mechanism to connect the blade and handle. The pivot allows the blade to fold into the handle easily. Folding knives come in different designs and can easily fit in your pocket. Some have single blades, while others have multiple blades—and the blades can be smooth or serrated.

This knife is the exact opposite of the folding knife, and its blade does not fold into the handle. Because of this, manufacturers usually make sheaths for fixed-blade knives to ensure the blades are covered at all times. Fixed-blade knives come in different designs and are categorized according to their purpose. They include hunting knives, combat knives, survival knives, and boot knives.

A card knife—also sometimes called a wallet knife—is very slim and resembles a credit card in shape and size. Because of its size, you can put it in your wallet next to your credit cards. It is ideal for those who travel frequently or don’t like carrying a folding knife or a fixed blade knife. A card knife is very lightweight, highly portable, and relatively durable.

A multi-tool knife is the most versatile pocket knife and is very popular with camping enthusiasts. It not only contains a blade, but it also has other useful tools you may need, like a screwdriver, a reamer, a wire stripper, and a bottle opener. Some multi-tool knives have extra features like scissors, a nail file, and tweezers.

A lapel knife is a small knife that was often used by spies in WWII. As its name implies, it can be hidden in a lapel—it can also be dropped into a boot, a sock, or hidden in a tie. Unlike most EDC knives, a lapel knife is easy to conceal. You can use it to protect yourself or for other purposes, like cutting objects. However, it’s very important to know how to hold the knife: Since it has a small handle, it can accidentally cut you. Experts recommend holding it between the thumb, the middle finger, and the index finger, like a key.

Gerber, an American brand based in Portland, Ore., was founded in 1939 and makes problem-solving and life-saving knives, cutting tools, multi-tools, and equipment. The company's products are specially designed for exploring, hunting, working, protection, or survival.

Victorinox is a company based in Switzerland that manufactures knives and luxury watches. The Swiss Army knives the company makes feature a proprietary blend of steel from France and Germany. If you’re looking for an EDC knife with several tools and versatile blades that will do pretty much anything you need, it’s the Victorinox Swiss Army Fieldmaster Pocket Knife.

Founded in Oregon in 1994, CRKT is an American company known for its high-quality products. Over the last three decades, CRKT has manufactured knives and cutlery for work, cooking, survival, combat, hunting, and many more.

To choose the best design, consider the environment where you spend a lot of time. If you spend most of your days in an urban environment, get a folding EDC knife since it’s discreet, lighter to carry, and remains inconspicuous in urban areas. If you live in a rural area, you can get a fixed-blade knife because you may be skinning game and cutting rope most of the time.

EDC knives have a variety of blade edges to fit different needs. The most common edge types are straight edge, fully serrated, and partially serrated. Blades with straight edges are straight along the cutting edge or slightly curved. They are great for cutting, scraping, poking, stabbing, skewering, pushing cuts (like shaving and skinning), and precision work.

Fully serrated blades have tooth- or saw-like edges ground into the cutting surface. They can be used like small saws with a back-and-forth motion. The blades are ideal for cutting through fabric, ropes, belts, and other textured materials. However, they are poor at stabbing because the serrations get stuck on clothing or bones.

A good EDC knife should open and close quickly. You should be able to use it to get yourself out of a jammed seat belt or to cut twine more efficiently. A one-handed opening blade—also called an assisted-opening knife—is the best as it has a thumb stud that allows you to open it easily. It is a type of folding knife that uses an internal mechanism to open the blade once you’ve partially opened it using a flipper or thumb stud.

With a two-handed opening system, you have to open the knife using both hands: One hand holds the knife handle while the other opens the blade. Most people prefer assisted-opening knives because they provide quick and easy access to the blade.

In a world filled with general-purpose pocket knives, the Extreme Ops knife stands out for its specialized nature. It features a hybrid straight and serrated blade and can cut and tear different items. Its thumb studs allow for easy opening when quick deployment is needed. The blade is made from high carbon stainless steel, while the handle is made from aluminum. The knife’s innovative ergonomic design makes it comfortable to hold. Its blade is perfect for slicing tasks, and its tip is large enough to make small punctures. It’s also equipped with a frame lock to ensure the blade isn’t deployed when it’s closed.

However, the knife is on the smaller side and requires a lot of force to flick open. It also doesn’t open halfway on its own and is dull out of the box, so be sure to sharpen it before you use it.

Not only is this EDC knife remarkably handy and durable, but it also has the potential to outlast other models despite its low price. It features a utility blade that's replaceable with contractor-grade or standard size utility blades (2 1/4 inches). You can use the pocket-sized knife for a variety of tasks—from opening boxes to cutting a rope. Its deep finger grooves make for a secure grip, and its stainless steel handle also doubles as a money clip. It only weighs 2.5 ounces and is backed by a limited lifetime warranty.

The Gerber EAB Lite Pocket Knife is everything a small everyday carry knife should be: sharp, portable, and sturdy. However, it lacks a thumb stub or assist spring for one-handed opening, which means your other hand will always handle the sharp end. Additionally, the blade is extremely sharp and may cut you accidentally.

f you're looking for a knife you can take with you everywhere you go, take a look at the Albatross Tactical Folding Knife. The knife is sharp and offers one-handed deployment for quick opening and closing. It also has a liner lock that locks the blade securely into place. Its slightly recurved blade is ideal for multitasking. The pocket clip rests on the frame, making it easy to pull the knife from your pocket.

While this EDC knife can be used in different applications, it is not lightweight and is heavier than it appears. Although it is very easy to open, it isn't easy to close once opened. It also doesn't have a good grip because it is very small.

This EDC knife is affordable, remarkably durable, and features a timeless design. The knife is unencumbered by unnecessary additions, but it manages to remain striking thanks to its ergonomic, stainless steel handle, drop point blade, and all-gray color. This EDC knife is highly versatile and is ideal for most tasks, such as cutting, slicing, piercing, stabbing. The blade’s slim tip also allows it to excel at piercing and detail work. The blade is made from Sandvik 14C28N Steel, arguably the best steel for knives in the world. SpeedSafe Assisted Opening allows you to open and close the blade easily. The frame lock holds the blade open during use while the tip lock keeps it closed when you’re carrying the knife.

However, the knife's tip is not very durable and tends to break easily. Also, the blade may start rusting after a while

This Swiss Army Knife is an icon of functionality and is very similar to the original blade issued to the Swiss army back in the late 1800s. It is built to last a lifetime thanks to the beautifully constructed Swiss-made stainless steel, and it has all the features you need for your everyday adventures. It has seven functions, and its tools include scissors and a nail file with a screwdriver. You can use it to cut, slice, open bottles, drive in screws, and file your nails.

It’s worth mentioning that the knife has a few faults: Most users have complained that it is extremely small and makes a better keychain than a knife. Also, its blade isn’t very sharp, so you'll have to sharpen it to your desired sharpness.

Q: What can I do to maintain an EDC knife?

To make sure the knife opens and closes properly and effectively, oil the bearings and screws and make sure they are tightened daily. You can also rinse out the washers and other components with water, closing and opening the knife while doing so.

Q: How do I sharpen an EDC knife?

Purchase a sharpening or whetstone. The stones feature both a rough side and a fine grit side to ensure your knife is properly sharpened. You also need a lubricant that limits the amount of heat produced from the sharpening process.

Check the laws in your state. While there may be no laws strictly banning or prohibiting EDC knives, there are ones focused on switchblades. Also note that EDC knives are not allowed on school campuses, airports, or courtrooms.

The more affordable Gerber EAB Lite Pocket Knife is backed by a popular name and is ambidextrous for added convenience.