When you ride a motorcycle, it’s possible that you may be involved in a collision. A motorcycle dash cam can help protect you by providing visual evidence should an accident occur. They can also document the scenery on a road trip. These devices are very hardy and capture data in extreme conditions. Check out our buying guide to find the best one to suit your needs.

The word "channel" refers to the number of cameras featured in a motorcycle dash cam. For years, consumers only had access to single-channel dash cams in the form of a front-facing dash camera. This type of dash cam has one forward-facing lens that is only able to record footage in one direction: the front of the motorcycle.

A dual-channel dash cam has a forward-facing camera as well as a secondary camera that can record footage from the rear of the bike. A rearview camera is useful if someone hits you from behind. When you have two cameras in your setup, you have extra footage to provide as evidence in case of an accident.

Garmin was founded in 1989 in Kansas and currently has its headquarters in Olathe, Kansas. The company aims to create navigation and communication devices that make life easier for its customers. One of its popular dash cams is the Garmin Dash Cam 65.

SYKIK was founded in 2009 after a biker was almost killed by a hit-and-run driver. The incident compelled him to launch Sykik Riders, so he could give people everyday-essential electronics that don't cost a lot of money. The company is based in Los Angeles, California. One popular product is the Sykik Rider CR1, Dual Camera System for Motorcycles and Scooters.

This is one area in which you should not pinch pennies. The best dash camera systems are constructed of high-quality materials. Low-quality materials can affect durability. You want a camera that is solidly built so it can last for several years. Otherwise, you will have to spend more money on replacing it.

When you buy a dash cam for your car, it stays inside the vehicle and isn't exposed to the elements. Motorcycle dash cams, however, are susceptible to rain, snow, and varying temperatures. Be sure to check if the camera is water-resistant or waterproof. Some have waterproof elements, but the head unit itself may not be 100 percent waterproof.

Some cameras are better than others when it comes to their resolution, but typically top-end dash cams are either 1440P or 1080P. Try to avoid cameras that are 720P (HD) because the resolution will not be not very good. The higher the resolution, the clearer the footage will be.

Auto On and Off 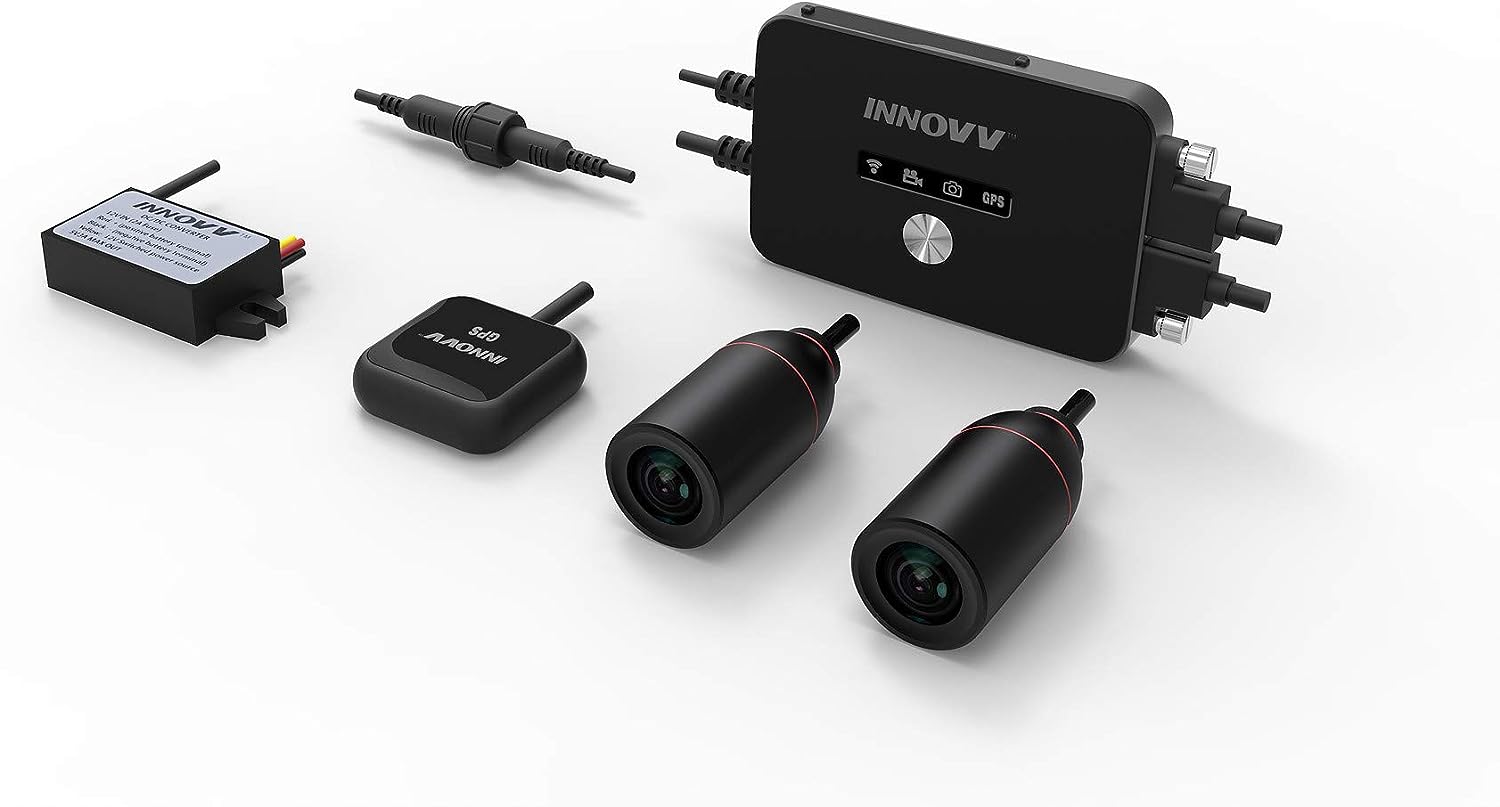 This dash cam is tough, durable, and water-resistant, which makes it withstand challenging weather conditions. It includes a smart parking mode that monitors your bike when you're away from it. It also gives you the ability to review live recordings using an iOS or Android app. All footage is captured in HD 1080P at 30fps.

This is a high-quality, robust, set-it-and-forget-it looping camera system. The image quality is very good, the installation is easy, and the instructions are simple to follow. Speed and location data are logged in each video file. Overall, it's a solid, dual-channel bike DVR system for a good price.

One problem is that downloading the video with the K2 app is slow. Also, the dash cam does not include an external microphone, which can be helpful if you have a conversation with someone following an accident. In addition, the camera may drain your bike's battery. 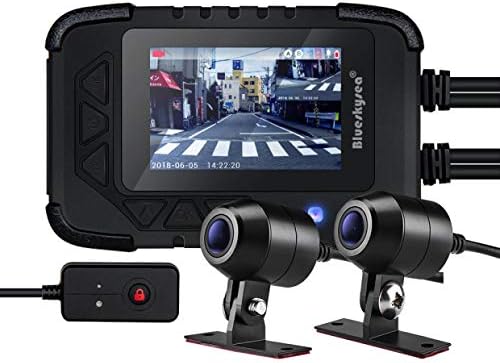 This two-channel, waterproof video recorder has an expanded 130-degree field of view and can withstand very rainy conditions. The 6G all-glass professional lens has an infrared filter to block infrared rays and reduce glare. It comes with two Sony 323+6 light sensors and has 1080P resolution  in both the front and rear.

This camera is easy to use and program. It features loop recording, and it is particularly bright during the nighttime and in low light conditions. Picture quality is great, and uploading the files onto the computer is easy. It also provides plenty of footage you could use in court to show what happened during an accident. It is also more than sufficient to capture license plate numbers.

One problem with this camera is that it does not work with iOS, so you're out of luck if you want to pair it with an Apple device. Also, it may have problems if it's exposed to too much vibration. It may also be sensitive to high temperatures. 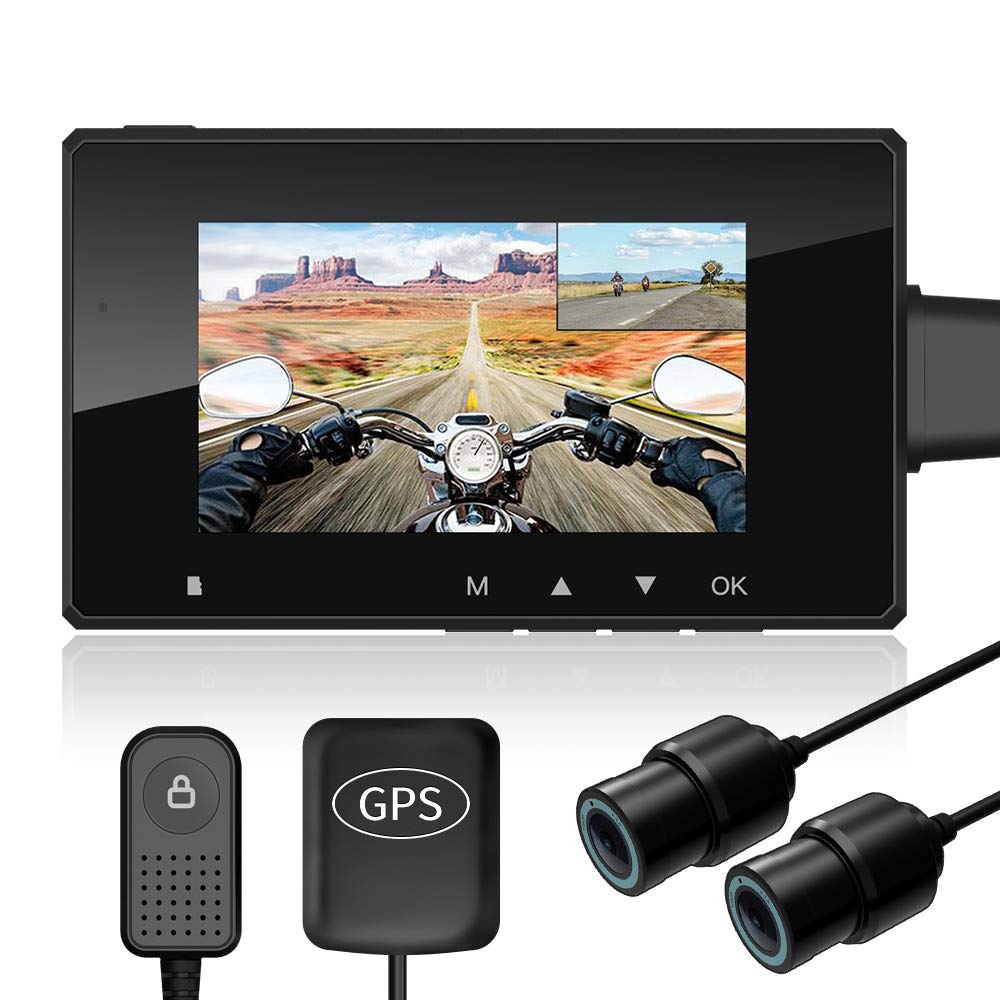 The 12V to 5V power cord connects the cam directly to your bike's light or ignition switch, enabling it to start and stop recording when the engine starts and stops. Installation is straightforward. Also, the biker cam has an app that you can connect using your phone and Wi-Fi for real-time video, downloading, editing, and sharing. The lens is waterproof and dustproof, and the cam includes a GPS antenna, which allows you to track your riding route.

One drawback is the monitor/head unit isn't waterproof, so it needs to be placed in a saddlebag or plastic bag when it's raining. Also, the unit does not come with a memory card.

A: Dashboard cameras are legal in most states. However, if your dash cam can record audio, 12 states, such as California, Florida, and Montana, require permission from both parties.

Q: Can you use a dashboard cam to check blind spots?

A: Motorcycle dash cams are intended to be used as recording devices, not as a riding aid. Also, the display is usually much too small to look at when you're riding.

A: It depends on the product. It is optional on some brands, and one feature of GPS that makes it appealing is that it can log your speed and location.

Our pick for the best motorcycle dash cam is the INNOVV K2 Dual Channel Motorcycle Motocam. It's water-resistant, simple to install, and it includes GPS tagging and a smart parking mode.