Sometimes Lady Luck Just Doesn't Want To Dance With You 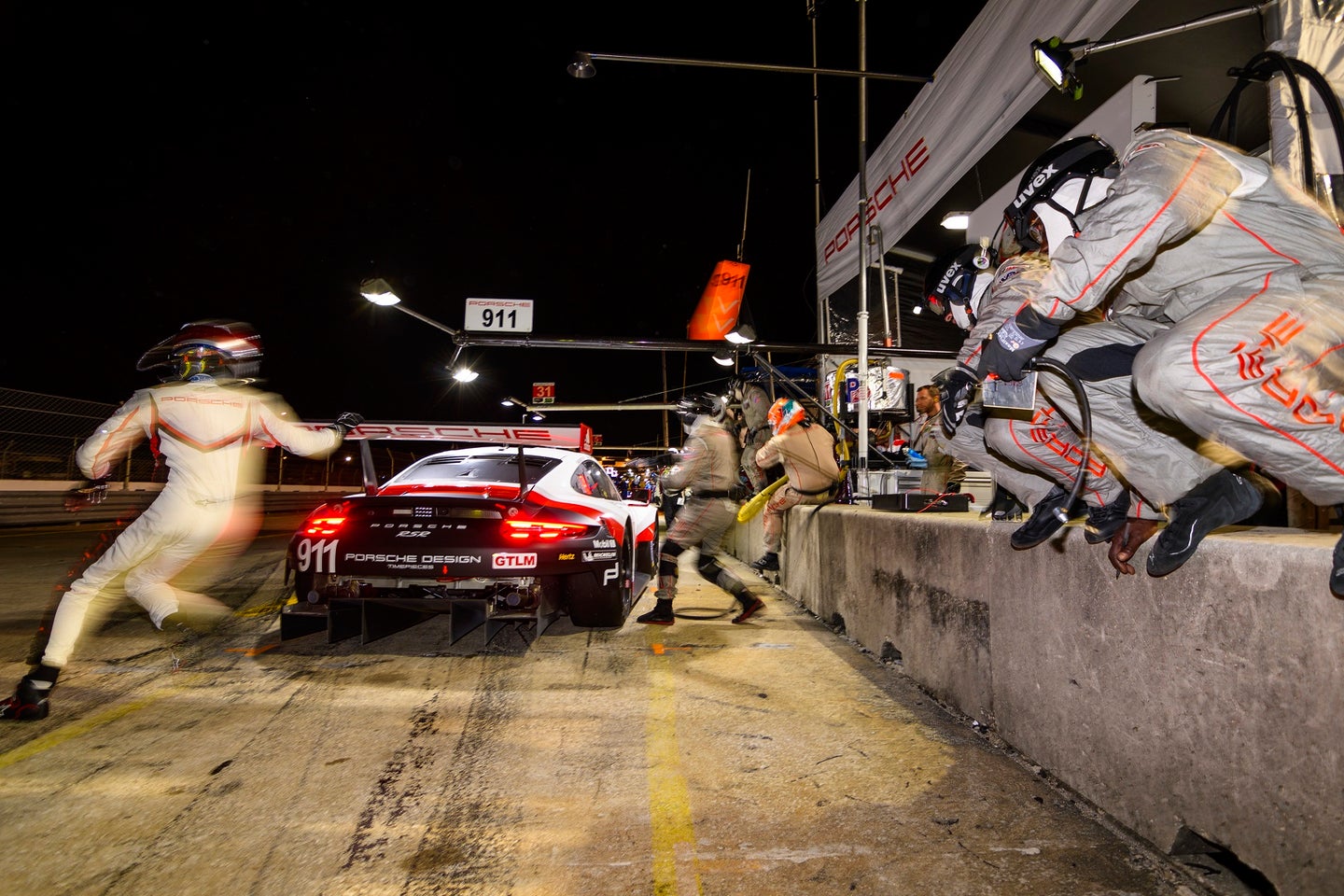 Porsche factory driver Patrick Pilet is an angry young man tonight. He had his 12 hours of Sebring GTLM class victory snatched away from his easy grasp with a punctured tire only thirty minutes from the end of the half-day Floridian endurance race. As Porsche motorsport fans, we're absolutely gutted for him, not to mention his teammates Fred Makowiecki and Dirk Werner who helped him get into contention. If you only look at the finish results and see Porsche finishing thirteenth and fourteenth overall (7th and 8th in class) it doesn't tell the whole story. As they say, 'that's why they run the because it isn't just about being fast, it's about being safe, clean, and more than anything, lucky.

With just about an hour to go in the race, a stranded inoperable car caused a full-course caution period that lasted until about the 55-minute mark. During that caution period, the GTLM class leaders pitted for fuel and tires, Patrick Pilet coming in from a very fast second place. That was when the bad luck began. A stuck wheel gun saw the team lose a couple of seconds on pit road which dropped the #911 car to fourth behind Antonio Garcia (Corvette), Joey Hand, and Richard Westbrook (both Ford GTs). With many drivers, the flow of the race would have been interrupted by such horrible luck and they would run out of steam. took advantage of his new tires and a full tank of fuel to set fast lap after fast lap, hard charging on the cars in front of him.

Within a few he'd passed the first of the two Fords. had the run on the field and was setting times nearly half a second faster than Garcia in the lead. Not many more laps later and had passed the second Ford into second. Patrick was able to take a line through turn 17 much tighter than the competition and was able to really put the power down coming out of that corner onto the front straight, setting up the competition into turn one. With thirty minutes remaining in the motor race, had his front bumper nearly melding with the rear bumper of Antonio Garcia's Corvette. He was still running at least three-tenths of a second faster than the leader every lap.

On the very lap where looked to be setting up his pass for the lead, the unthinkable happened. A front left tire puncture. I watched in real time as name dropped down the timesheets as he pulled into pit lane to fit a single fresh Michelin slick tire. Blown away. Clearly not capable of thinking, the team added insult to injury by dropping car before the wheel-gun had been thrown back to the wall, and the #911 was given a drive-through penalty for running over equipment in the pit lane (in this case, namely the air gun's feed hose).

Porsche had banked their entire race on the final two hours, which run into the dark. As the track cools off, they are able to run a different setup that allows the car to grip better than the other cars. They saved , arguably the most competitive driver in that car, mostly for the final two stints in the dark hours. The only job that Werner and Mako had in the first ten hours of the race or so were to keep the car on the lead lap and keep the car clean. Their strategy was so close to paying off. I can't help but think it absolutely would have paid off. Disregard the finishing positions, Porsche was much stronger in the 2017 12 hours of Sebring than the history books will show.