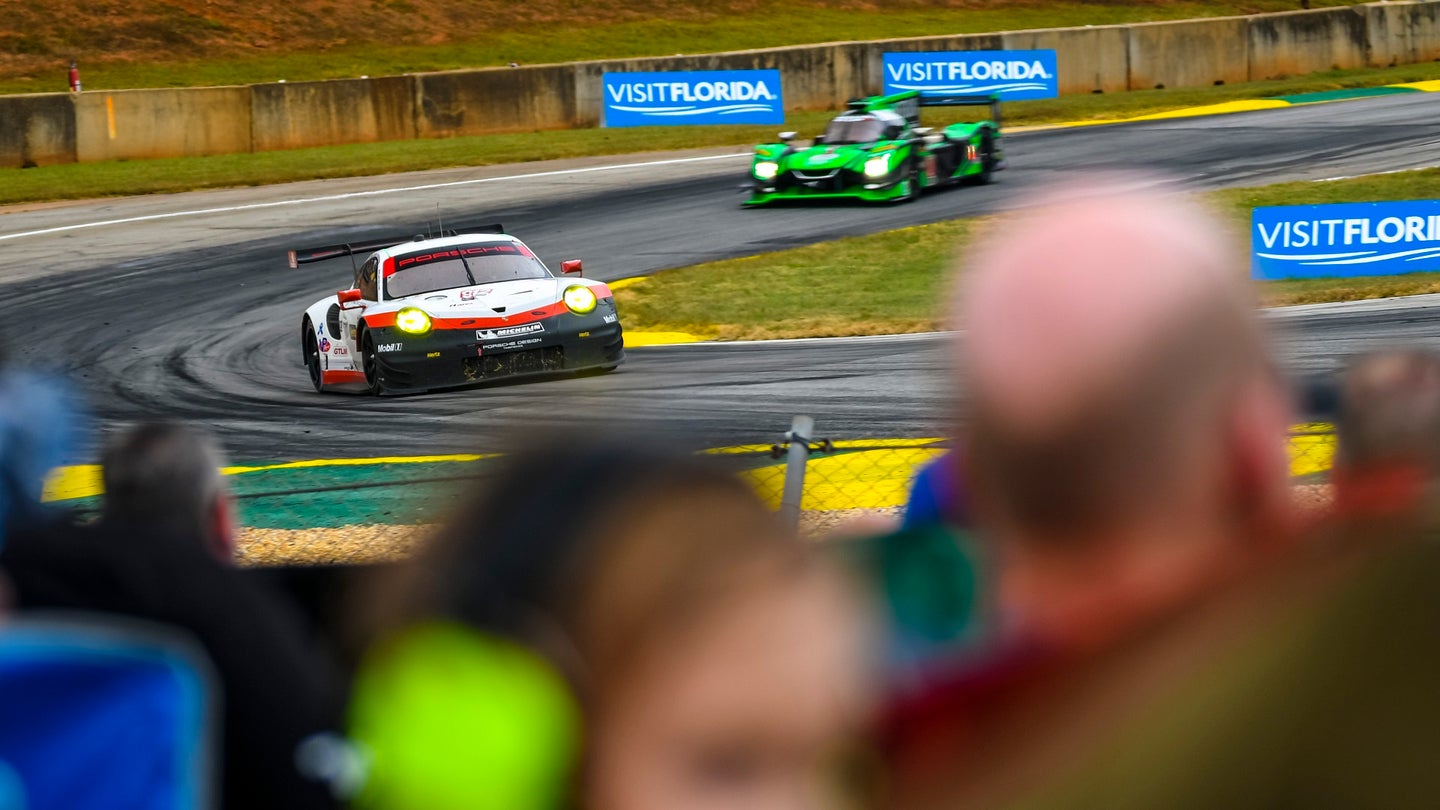 This weekend's 10-hour race at Road Atlanta marked the final event in the 11-round IMSA season, and Porsche was more than pleased to finish out their season with a pair of endurance championships, plus a pair of 911 GT3 Rs on the GTD class podium, and Porsche factory ace LMP1 driver, Brendon Hartley, sharing the overall victory in a privateer entry prototype. Even without any of their cars finishing on the top step of the podium, there was plenty for Porsche to celebrate this weekend in Hall County, Georgia. Competing against the best cars and drivers from BMW, Chevrolet, Ford, and Ferrari, Porsche managed to score a pair of championships, including the North American Endurance Cup GTLM Class drivers' title, and team's title. They fell just short of the manufacturer's title, losing to Ford by just a few points. Comprising the long rounds of the IMSA season; namely Daytona, Sebring, Watkins Glen, and Road Atlanta, Porsche finished high enough in each of those rounds to collect some nice hardware. Furthermore, Porsche can be proud of the car they produced for the 2017 season, from scratch, that saw its first victory, and a total of five podiums from 11 rounds. That's nothing to shout down for a brand new racer.

During the 10 hour race on Saturday, Porsche saw ups and downs, as did all of the teams. There was contact and weather nightmares, long stints in the car, crazy fuel strategies, and lots of wheel-to-wheel racing. In the #911 car, Porsche added Nick Tandy to the already successful Patrick Pilet & Dirk Werner pairing, while the #912 car saw Earl Bamber jump on board with Laurens Vanthoor and Gimmi Bruni. The factory team ended up finishing in fourth and fifth respectively. Meanwhile, Porsche factory aces were also placed in the GTD class with Michael Christensen joining Daniel Morad and Michael de Quesada in the Alegra Motorsports car for second in class, and Joerg Bergmeister jumped aboard his traditional Park Place Motorsports car with Patrick Lindsey and Matthew McMurry for a third-in-class finish.

Dr Frank-Steffen Walliser, Vice President Motorsport and GT Cars: “We’ve clinched the first title for the new 911 RSR at this race. By winning the North American Endurance Cup for drivers and teams, we’ve shown that we were always at the front at the right time for the major endurance races and, hence, have underlined the reliability of our car over the season. For a maiden season with a completely new car, this was a good performance. Congratulations to our customer teams for their podium results in the GTD class. With outstanding performances from drivers and teams, they’ve once again shown what our 911 GT3 R can do. I hope that they can repeat these successes next year.”

Patrick Pilet (911 RSR #911): “Winning the North American Endurance Cup is a great team effort. I’m thrilled to take this trophy home to Weissach as a thank you to everyone who has worked on the new 911 RSR and has supported us this season so brilliantly. This race was very tough for us. We had to fight hard to defend ourselves against the strong opposition. I’m pleased we managed it.”

Dirk Werner (911 RSR #911): “Our main goal at this race was to win the North American Endurance Cup. We did that and I’m delighted for everyone in our team. It was a difficult season, and this final race, with its many incidents and safety car phases, was anything but easy. That makes this success all the more thrilling.”

Nick Tandy (911 RSR #911): “It was wonderful for me to be a part of this team again on this legendary circuit and to support Patrick and Dirk in their bid to win the North American Endurance Cup. The fact that it’s also the first title for the new 911 RSR makes it even more valuable.”

Laurens Vanthoor (911 RSR #912): “We didn’t have the pace today to seriously fight for victory. We tried everything, we had a great strategy, but it wasn’t enough. I’m pleased that our teammates have won the North American Endurance Cup. That’s a terrific achievement. Now we’re looking ahead to 2018 and we’re all determined to come back even stronger.”

Gianmaria Bruni (911 RSR #912): “What a tough fight. We lost time with the pit stop incident, when our 911 RSR caught fire briefly. However, thanks to a perfect pit stop strategy, we were able to make up those lost laps. The many spirited duels were huge fun.”

Earl Bamber (911 RSR #912): “It was great to drive the new 911 RSR at Road Atlanta. Our long runs were good, we only had problems at the restarts. Still, we fought to the flag. It’s a shame that we weren’t able to reward ourselves with a podium result.”

Michael Christensen (911 GT3 R #28): “Victory at the season opener in Daytona, and now second place at Petit Le Mans – it seems the classic races suit us. I’m thrilled about this hard-won success. This race pushes you to the limit. But when you’re rewarded with a podium result, then all that hard work has paid off.”

Jörg Bergmeister (911 GT3 R #73): “To conclude such a tough season with a podium always feels great – especially after starting from twelfth on the grid. It was a gruelling race, particularly because we didn’t have a cooling vest or drink bottle. But I enjoy such challenges.”

Porsche driver Brendon Hartley sat in as third driver (with Ryan Dalziel and Scott Sharp) in the Tequila Patron ESM Nissan team to help them win the race overall.