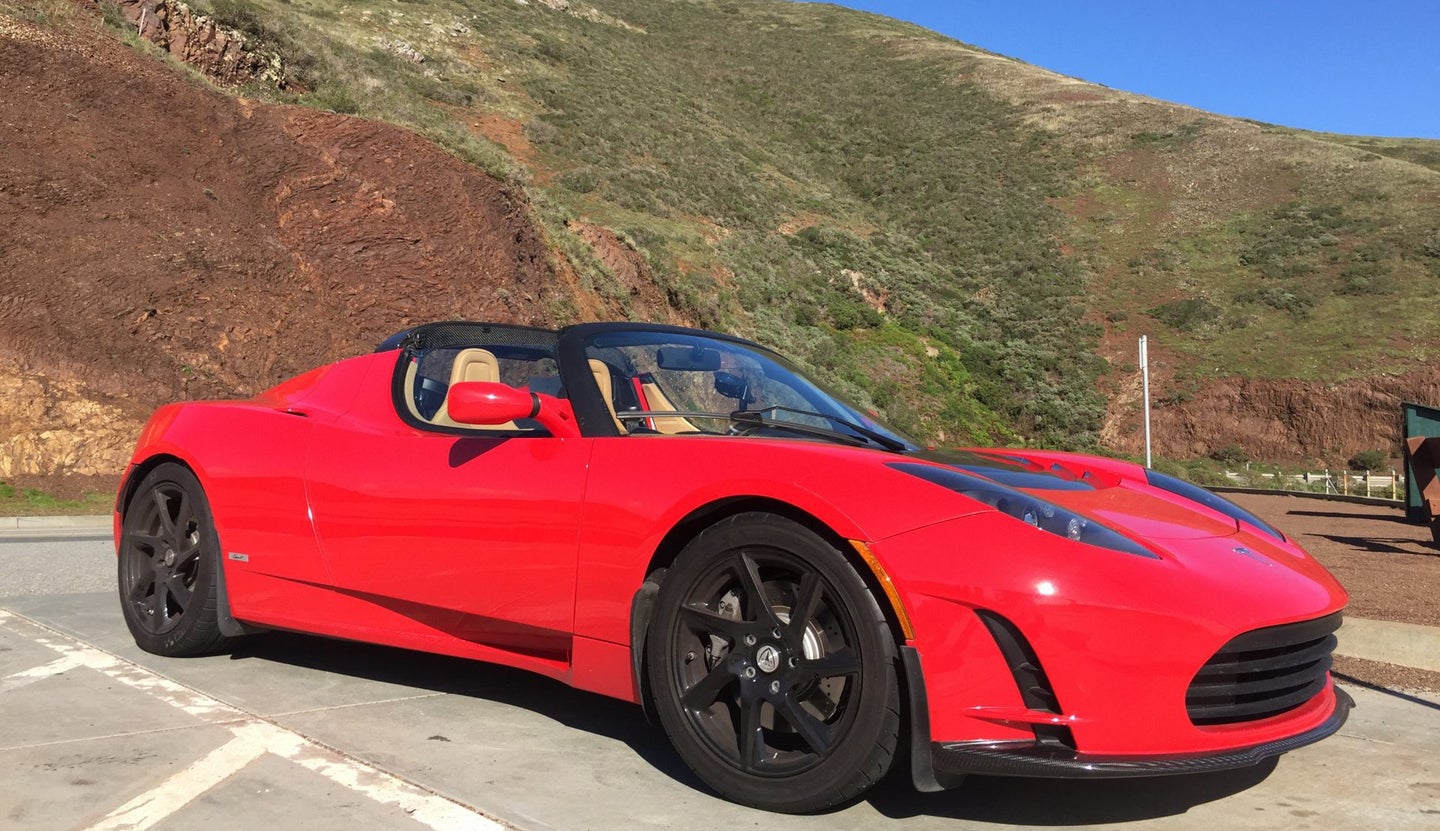 The Tesla Roadster is a machine out of time, a gorgeous and maddening sports car with a boot in the future and a high heel in the past. If you were shopping for an exotic in 2006, this car had everything: a new manufacturer no one believed would stay in business, a questionable electric drivetrain stuffed into a stretched Lotus Elise, a $109,000 base price that would have bought you a fully-optioned Porsche 911, and exclusivity that would make Ferrari owners weep.

Elon Musk has said they were crazy to build it. I would have said you were crazy to buy one, but after driving one of the last, best versions ever made—a fully-upgraded, optioned-out 2011 Roadster Sport 3.0—I’m not so sure.

I take that back.

You had to be crazy to buy one. But not any crazier than someone who bought a Lotus, Morgan or TVR. These are cars you buy with absolutely no expectation they will be good, or even work. At least not all the time. That’s why Porsches makes sense, and even modern Ferraris, but those have become so reliable as to remove what was once required for anything foreign with two seats and a high horsepower-to-weight ratio:

How do you know you can trust a person, let alone a machine? If you don’t, that’s trust. That’s what it takes to buy a British exotic. You aren’t investing in a car guaranteed to get you from A to B. You might not even get A to A. You’re investing in a unique driving experience. You’re investing in the company. Porsche and Ferrari? They don’t need you. Lotus and Morgan? Their survival may hinge on you maxing out the option list.

A Tesla Roadster? Every buyer was investing not only in a car, but in a company promising a better way. In 2006 no one outside of Tesla knew what was coming six years later. The Model S was merely an idea. Tesla’s Supercharger Network didn’t exist. Autopilot was only for planes. At least it had regenerative braking. Anyone placing a $5000 deposit was betting that Elon Musk — then only known as co-founder of PayPal and Space X — was going to make electric cars great for the first time.

Every one of those buyers should be thanked, for without the Roadster we wouldn’t have the brilliant Model S, the Model X, the upcoming Model 3, or any of the (hopefully) exciting models coming soon from Detroit, Germany and Japan. Anyone who mourned the Chevy EV1 is out of their minds. Ugly and slow, the EV1 inspired nothing, least of all support from GM. The Tesla Roadster was the first sexy electric car, and is therefore the true Godfather of the entire EV sector.

But is it any good?

Let’s talk Fourth Car Theory. If you need just one car, it needs to be sensible. You probably need a sedan, or a crossover. A family with two kids? A sedan and a crossover/SUV. Three cars? Having ascended two rungs on Roy’s Pyramid of Automotive Actualization, the third can be pure fun. If you’re of sound mind and body, it’s a new-ish coupe or convertible good for road trips with your spouse, and under warranty. You want it to be reliable, just in case you go somewhere on a date, or with someone who isn’t your spouse.

If you must have more, if you have time and money to burn, if you’ve wrapped your alimony payments, if you want to be noticed, if you don’t need to get there, if you want a passionate relationship oscillating between boundless love and searing anger, you are ready for a fourth car.

You’re ready for a Tesla Roadster.

Elon Musk has all but confessed that it wasn’t good, but that doesn't mean it isn't great.

Madre de Dios, it was $158,045 in 2011, which was Porsche 911 Turbo territory. A wretched value by third car standards, but an absolute bargain by fourth car standards. What else are you going to buy? Everyone has a Lamborghini. And a Bentley. And an Aston. Sure, one could buy a Morgan Aero Supersport for even greater exclusivity, but that’s just masochism. I own a Morgan. Trust me.

Call it $187,045 to own a singular piece of the future, from the past. With depreciation, the one I drove is probably worth $90-110k today, depending on the mental health of those interested. Would I buy one? We’ll also get to that later.

If you like the Lotus Elise, you’re going to love this. Longer and cleaner looking, the red/tan example I borrowed was constantly mistaken for Ferrari. I loved it.

Stunning. The upgraded seats and custom leather/carbon fiber interior are exactly what one would expect at this price. Only $11,700, anyone who didn’t order this package was a fool. Why can’t we have this option on the Model S or X? If you can afford Tesla’s latest, you’d happily spend they money for this level of taste. Lovely, just lovely.

Excellent. The one I drove had nearly 7,500 miles. As a press car, they had to have been hard. Contrary to expectations, it didn't have a single squeak or rattle.

Entertaining. Light years ahead of my 1987 Porsche 911 Targa top, which means the Tesla’s is soft and rolls rather than hard and folds. The Roadster’s takes the same amount of time to remove or replace — less than a minute — and offers far better insulation. Like any roadster, you don’t want to drive with it on, however, because claustrophobia rules.

Lotus, or horrible. Ingress and egress is a curse. Wear loose pants. Don’t eat Mexican or Indian before getting in, let alone driving. Does it have a suspension? Hit a pothole and it sounds like bad things will happen, if not to the car, than to you. Do not drive it in San Francisco, New York, or any city, ever. The steering wheel is not adjustable, but the seats are. Forward and back. Bring a pillow.

Lotus. A wide trunk bin will fit your mandatory charging cables, the soft top and your disappointment, if you care. It’s a good thing this car doesn’t have more range after a hard day of driving, because sometimes you can’t take it with you. I had to leave my luggage behind and put my clothes in a trash bag. Also, the carbon fiber trunk lid needs to be gently closed. VERY gently. Or else broken carbon fiber.

Lotus, or excellent. The 1000 lb+ battery is mounted where the engine should be, making it a little less than 1000 lbs heavier than an Elise, which weighs in at just under a ton. Utterly planted, body roll is near zero.

Lotus, or go-kart. Unassisted, direct, and life-threatening if you sneeze. Perfect.

Does anyone remember having a head unit hot swappable in the Best Buy parking lot? The Roadster is here to remind us of the glory of Alpine, swiveling displays and in-dash single-disc CD players. It has Bluetooth, so there’s that. I couldn’t figure out how to pair my phone. Also, the 2011 GPS appears to be the same that came in 2006, which looks like 2002. Luckily, the $4500 7-speaker stereo upgrade sounds incredible, partially because EVs have such a low noise floor, partially because the Roadster’s interior is Lilliputian, and maybe because the speakers are good.

Incredible, and also irrelevant. Performance mode will do 0-60 in 3.7 seconds. Standard mode is good for 3.9. This was supercar territory back in the day, but a new Model S will beat it. What it won’t beat is the Roadster’s handling. Top speed is electronically limited to 125mph, which is wise, because earlier generation battery tech was prone to cooling problems, which brings us to...

The original battery pack was good for 245 miles, according to the EPA. Not bad, but driven hard I’d be amazed if anyone got 150. That $29,000 80kWh upgrade is allegedly good for 340. I’ve gotten almost 300 miles out of a 2017 S with a 90kWh battery  in perfect conditions, but that’s a far more modern pack and system. I still don’t trust EPA ratings, and the very nature of the roadster precludes optimizing for range in the real world. You want to take off the top (increasing drag) and punch it (depleting the battery). No one’s getting more than 250. Driven hard, I bet it’s 220, which is totally livable for weekend mornings.

You’re going to want every bit of battery you can afford, because the Roadster’s Achilles heel isn’t range, it's…

A Tesla Supercharger can get you to 80% in 35-40 minutes, which is about as long as it takes me to get gas, sit down, eat, check social media and prank call my best friend. The Supercharger Network is the semi-secret key to Tesla’s popularity. Without it, they’d be dead, because it’s not only range that matters, but charging time.

A Roadster can’t be Supercharged. It uses a proprietary power inlet, and ships with a cable terminated with a J1772 adaptor, which is from the stone age of EVs. Best case scenario is four hours zero to max, but public chargers are going to take closer to 8. A 120V wall plug? 48 hours.

If you’re staying away from home overnight, you’re going to need some guarantees at your destination.

I loved it. Used prices are falling, with 2010’s running $65,000-$75,000. What isn’t falling is that $29,000 battery upgrade, without which I wouldn’t touch one. Value priced as exotics go, the 3.0 is an absolute bargain among fourth cars. Now that Tesla is out of the woods, Roadster values can only go up. If you can live with the charging speeds, it’s a timeless classic that doesn’t need to remain a garage queen.

Musk has teased they might bring it back. I hope they do. Add a modern Tesla drivetrain and a 100kWh battery, and we’re probably looking at a 2.1 to 2.2 second 0-60.