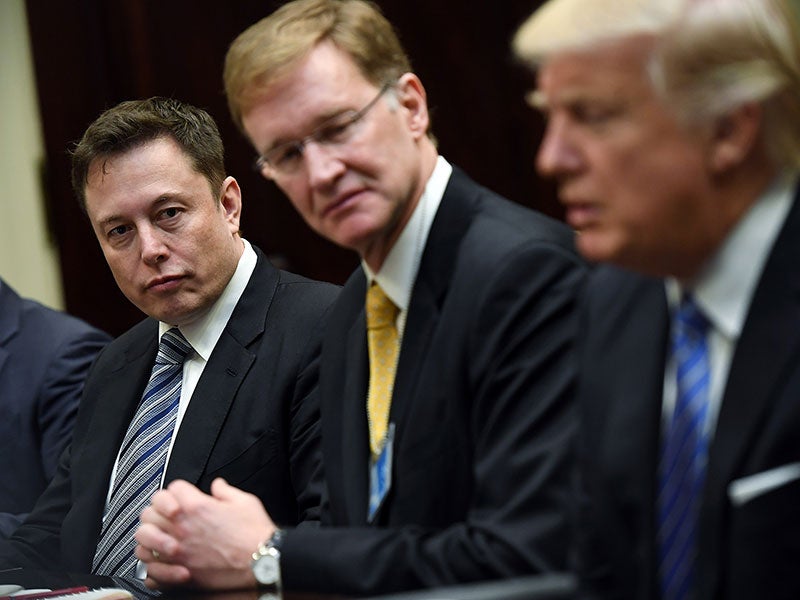 Tesla CEO Elon Musk is facing a backlash on Twitter for aligning himself with President Trump and his pick for Secretary of State, Rex Tillerson.

The PalPal and SpaceX co-founder drew his first foul when he joined Trump's 14-member advisory panel of technology leaders.  His second was when he voiced support for Rex Tillerson, the former CEO of ExxonMobil and Trump's pick for Secretary of State. Fans are struggling to reconcile the man who is almost synonymous with clean-energy and zero-emissions everything with his recent association with "the dark side."

Following the recent Executive Order implementing "Extreme Vetting" measures that bar entry to the U.S. for refugees and visa holders of seven Middle Eastern countries, criticism of Musk has intensified.

And Musk's support for Trump may cost Tesla some orders for the new Model 3.

Musk explained that he hopes to be the voice of reason for Trump, and he's crowdsourcing on Twitter ideas to amend the EO that he would use to obtain consensus from the advisory panel and present to the so-called leader of the free world. However, that didn't do much to assuage loyalists who feel betrayed by his flexible political associations. Many vented their disappointment on Twitter, and some have gone one step further by either cancelling or threatening to cancel their Model 3 reservation if he didn't do...something.

The company has more than 400,000 reservations for the electric compact sedan that is expected to enter production in the second half of 2017. Losing a couple potential purchases  isn't going to impact the manufacturer's production numbers significantly, but the real damage may be to the Silicon Valley mogul's reputation. That said, trading his fan base to get a carbon tax on the books may be a deal Musk will have to make.

Trump and Rex Tillerson need Musk and Tesla as much as he needs them.