It may not be the biggest automotive brand in sales anymore, but Toyota is still number one when it comes to Earth’s search engine habits. 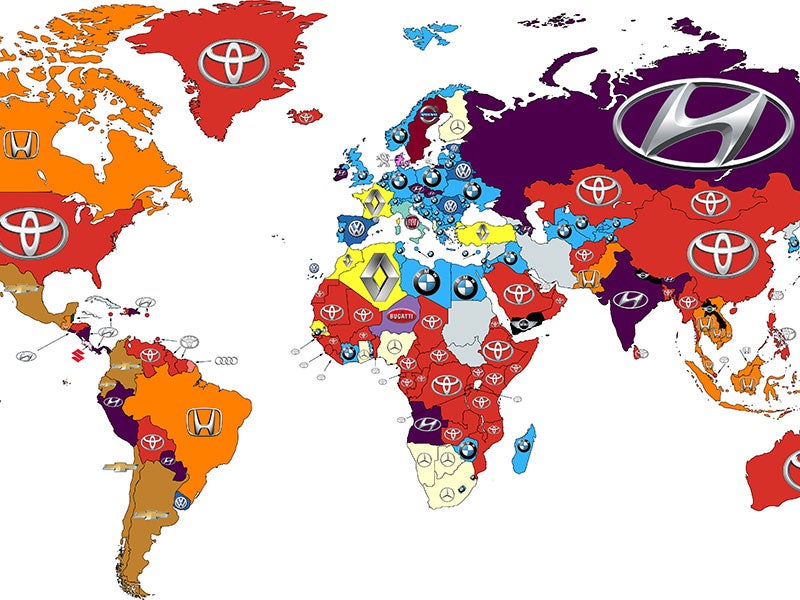 Volkswagen may have snatched away the title of the world's biggest carmaker in terms of sales in 2016, but Toyota still has it beaten in one category: the Japanese carmaker was the most-Googled car brand on planet Earth. At least, according to one source.

The results come from United Kingdom-based car parts company Quickco, which seems to have whipped up the data for the purposes of...well, getting people talking about Quickco. Regardless of their reasoning, the data makes for a pretty interesting map of the world, revealing the top-searched automotive brand for every nation across the globe. (Astute observers will notice that the countries lacking any data tend to be ones where the governments have extremely restrictive Internet policies.)

While most countries appear to have chosen fairly common brands—Toyota and Honda were most prominent globally, while BMW was popular across much of Europe, and Chevrolet sprung up quite a bit in Central and South America—there were a few oddities strewn about. The southern tip of Africa has a preference for Mercedes-Benz. Audi takes the top spot in French Guiana, while Jaguar grabs the brass ring in Belize. And oddest of all, Bugatti was the most commonly-searched car brand in Niger...where the per-capita GDP is $420.

That said, The Drive would like to draw attention to one caveat: Some of this data doesn't quite align with Google's own information posted on the search engine's 2016 year-in-review page. According to that site, Honda, not Toyota, was the most-searched-for brand in the U.S. last year; indeed, Toyota didn't even rank in the top 10, which strikes us as rather odd, considering its prominence in the American market. (Google's site doesn't include global car brand searches, so we can't compare Quickco's numbers with the search engine's data on that account.)

Autonomous cars are a given. Our relationship with them is still yet to be defined.