Mercedes-Benz Turns a Van Into a Delivery Drone Mothership

Could this finally put an end to careless delivery people smashing up your packages? 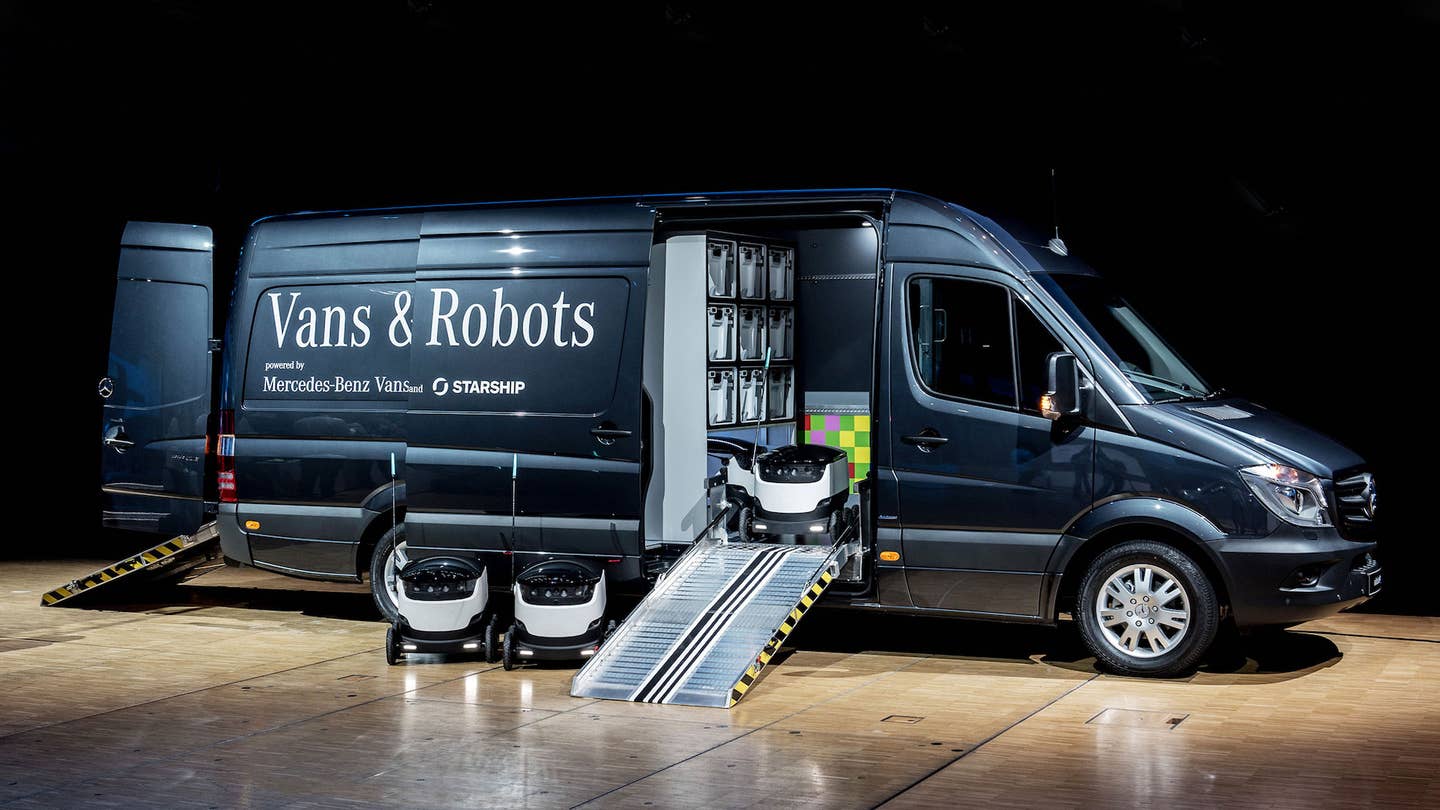 Aaaand here comes the future. Robot-based delivery company Starship Technologies and Mercedes-Benz have designed a van that could simplify how products travel to consumers, by serving as a mothership for autonomous delivery robots.

Currently, there is just one working prototype of the "Robovan," which is based on the Mercedes-Benz Sprinter. The van is designed to extend the range of as many as eight small wheeled delivery 'bots by carrying them to various delivery zones.

The drones will be pre-loaded with packages before being loaded onto the van; when the van reaches the delivery zone, each bot will be deployed via the on-board ramp, then autonomously find its way to the final delivery point before returning to the mothership. Starship claims this will allow for 400 packages to be dropped off during each nine-hour work shift. Advanced algorithms will be used to calculate ideal routes for the van and robots alike.

To successfully complete these deliveries by themselves, the robots have cameras and sensors that help identify a clear path. During early tests, however, the robots will be remotely controlled by humans, Wired reports. Once the robot arrives at its delivery destination, the customer collects his or her package by unlocking the bot's trunk with a pre-received code combination, much like the pizza delivery 'bot used by Domino's Down Under.

The vans are a key part of the autonomous delivery process "because the robots are limited in their radius in the last two to three miles as people don't want to wait for on-demand deliveries," Starship Technologies COO Allan Martinson said to Wired. "In order to get goods and e-commerce packages to an area, you still need to use vans and that's the best delivery method for the first 10 miles from the delivery center. By merging vans and robots so we get the best of both worlds, we can get a very efficient delivery."

It is unclear when these bots and the Robovans will be rolled out for broad commercial usage, but tests with actual merchandise are in progress in London, Wired reports.

Hey, if technology like this means fewer pissed-off delivery workers going wild with our packages, bring it on.