A pinch of rodent, a pinch of breast implant, and a pinch of gold are all you need to build the future. 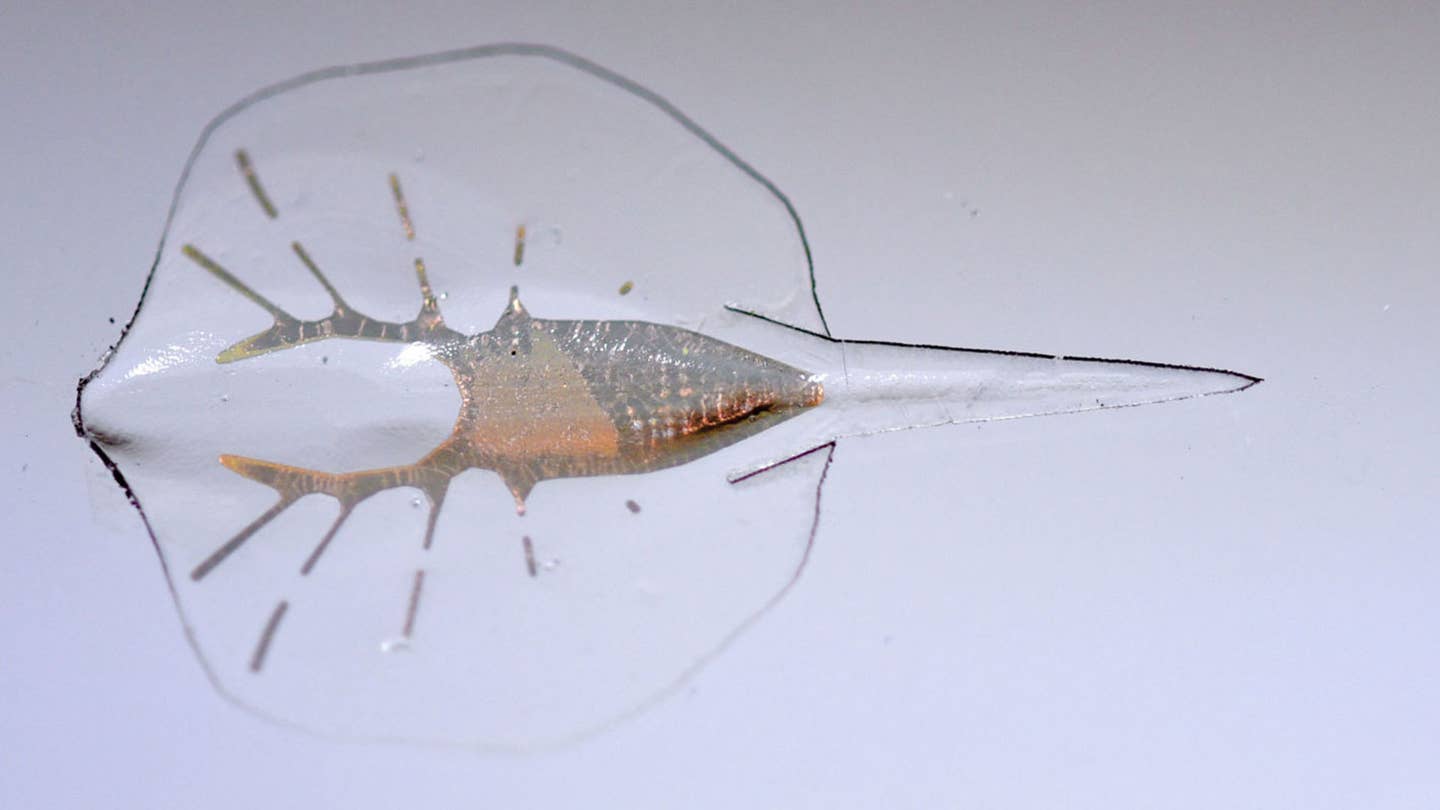 The future just arrived. An interdisciplinary team of scientists has created what they call an “artificial animal”—a tiny, remote-controlled cyborg stingray that uses living cells from a rat’s heart to mimic the swimming motion of an ocean creature.

About 0.6 inches long and weighing in at a mere four ounces, the robo-ray is made up of three ingredients: a flexible gold skeleton with ribs, layers of transparent silicon (the same type used in breast implants) molded in the shape of an ocean ray, and 200,000 living muscle cells from a rat’s heart. The bottom silicon layer is etched with two serpentine patterns that form geometric S-shapes on either side of the robe-ray’s spine; these run from the center to the edge of the fins and from the nose to the tail. The rat cells are laid into the pattern on either side of the gold spine; they then stitch themselves together to form an S-shaped line of muscle. Then the top layer of silicon seals the system.

Here's where things get really freaky. Employing optogenetics, the heart cells were modified to respond to two blue lights strobing at the end of a twin-pronged stylus. When the cyborg stingray is placed in saltwater suffused with glucose—the sugar molecules are used to feed the living heart tissue—and flashed with the light, the rat cells flex in series. That makes the robo-ray’s wings curl in the mesmeric, undulating manner of an actual ocean ray, pushing it forward at 3.2 millimeters per second. After flexing, the natural recoil in the gold skeleton pulls the wings back to its resting state. By varying the frequency of the blue light pulses, either wing can be made to flex faster or slower, enabling scientists to make the artificial animal turn—which they demonstrated by making the artificial animal navigate an obstacle course.

Kit Parker, a cardiac physiologist in the Disease Biophysics Group at Harvard University's Department of Bioengineering and Applied Sciences who helped develop the cyborg stingray, said his team developed the artificial animal as a way to help learn how hearts pump fluid. As the team detailed in a paper in the journal Science, though, so much wound up going into the build that the artificial animal contains lessons for everything from pacemakers to cyborgs.

Parker—who previously worked on an artificial jellyfish previously—said he undertook the experiment to learn more about the human heart, and to try and figure out how to build a synthetic heart from scratch. Nevertheless, the tiny creature could aid numerous scientific endeavors: the development of optical pacemakers instead of electrical ones, how to build other organs at a small scale, and how to make bio-hybrid robots that replace the bulk and complexity of mechanical sensors and actuators with simple living tissue.

Six weeks after Frankenstein’s stingray came alive, 80 percent of the rat cells were still working as intended. Now that his idea has been proven a success, though, Parker has already moved on to building a new tissue-engineered beast—one code-named “T100.” Insert Terminator theme music here.