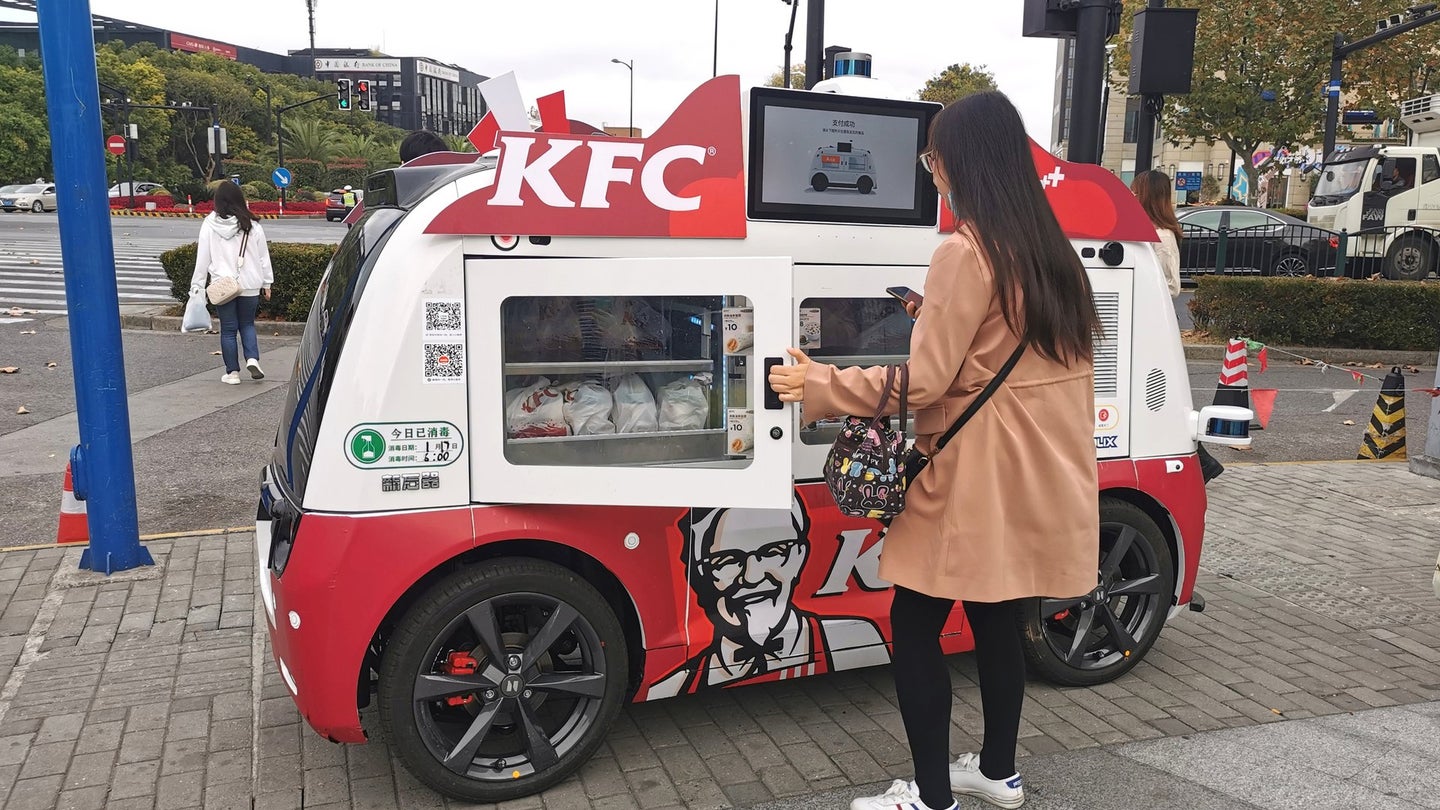 Drive-thrus are so last year. And those manned food trucks—those might as well be Flintstones cars. What we really need, especially in the age of COVID-19, is real innovation like autonomous food trucks that roam around the city looking for unsuspecting patrons and take mobile payments. What we need to save 2020 is little autonomous robots serving us Kentucky Fried Chicken whenever and wherever.

Luckily (if you live in China), KFC is already on top of things. The American fast-food chain recently deployed autonomous buggies to several areas of the country, including an area highlighted by a Twitter user outside of Shanghai.

According to the tweet, customers can walk right up to the tiny yet stylish KFC pod and place their order via a touch screen. They then issue a cashless payment via a QR code scanned from their cell phone and voilà! Hot and fresh chicken served from its tiny window.

The magic of the KFC car comes from Beijing-based autonomous delivery startup called Neolix which raised upwards of $29 million in funding earlier this year. The company's schtick is these tiny autonomous pods that can roam streets and campuses like some sort of automated vending machine, or courier, or security guard. And while the idea was conceived purely as the solution for costly logistical conundrums, the benefit of contactless deliveries seems like a no-brainer nowadays.

Neolix says that its vehicles are capable of Level 4 driving automation (as defined by the SAE) and make use of emerging high-speed 5G cellular broadband connections. On a full charge, the pods are said to achieve 62 miles of range and can travel at speeds up to 31 miles per hour, making it ideal for cities and high foot-traffic areas like colleges or large office campuses. There's also no need for the pods to be parked at charging stations, as the unit's batteries are reportedly built to be swapped out in under a minute.

This reads as a huge marketing campaign especially given KFC's reputation as the most popular fast-food restaurant in China, and the eatery's reputation for delivering snacks in a high-tech manner. But we have to admit, it certainly caught our eye as being something more than a gimmick. In a time where contactless deliveries and social distancing is more important than ever, being able to take delivery of food and medicine from a futuristic robot seems like the ideal situation.

Now if only the robot can remember to throw in some extra biscuits, then we'd be in business.

Freed from the real-world constraints of crash-absorbing crumple zones, this is how Mini would make the roomiest small car ever.

And we mean immediately.