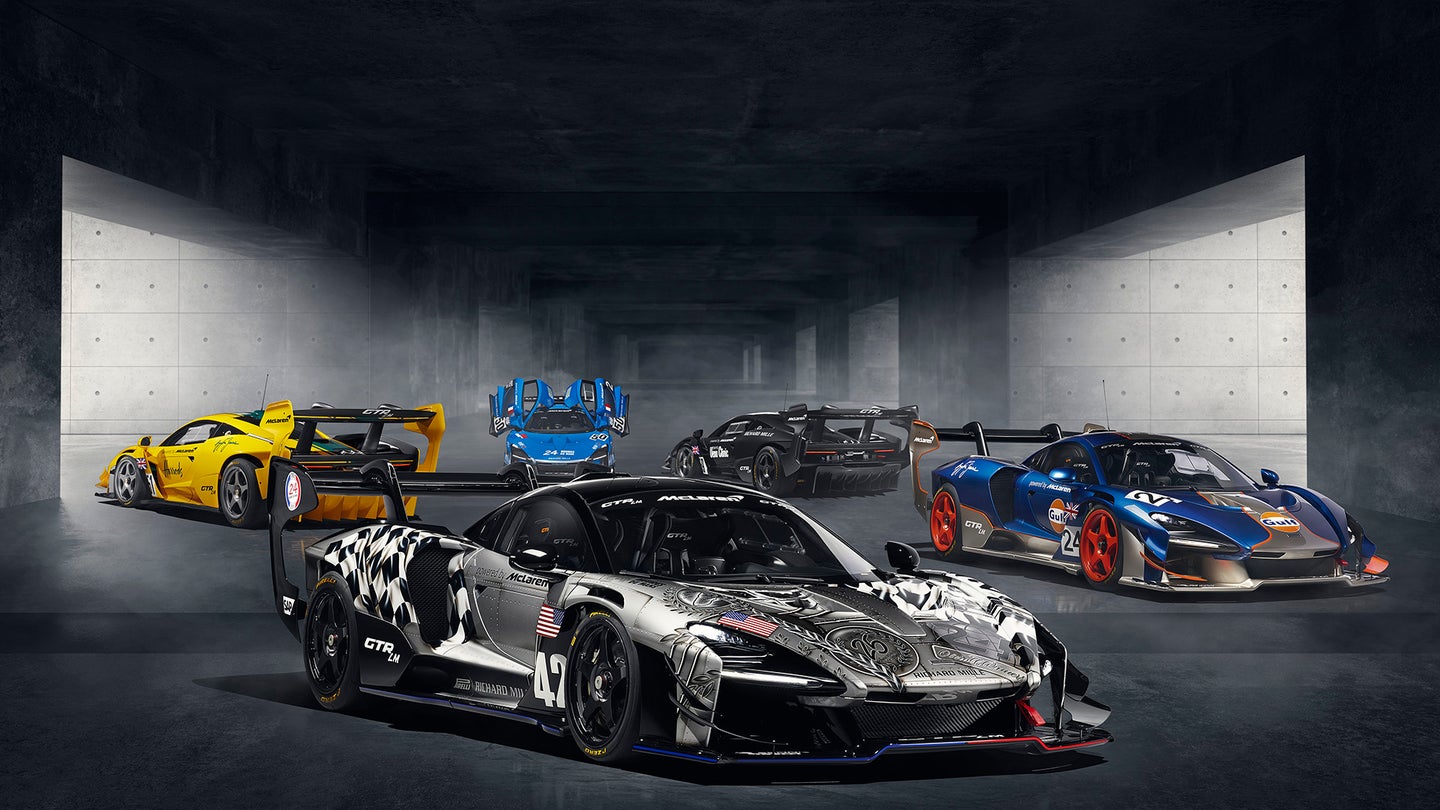 In 1995, McLaren sent seven of its brand new F1 GTRs to the 24 Hours of Le Mans. With these first year GTRs remaining as close to the road cars in specs as possible, McLarens finished first, third, fourth, fifth and 13th in the GT1 class, with two DNFs. The winning Ueno Clinic #01R prototype was McLaren's car ran by Lanzante Motorsport under the name of Kokusai Aihatsu Racing. This year, Lanzante is set to produce seven 'LM 25' edition McLarens to mark the anniversary, including a Senna and a Senna GTR.

Meanwhile, since Woking has already produced five mysterious McLaren Senna LMs, it was time for yet another five customer commissions showing the 1995 Le Mans liveries and trim put on wild Senna GTRs. With two of these track specials landing in America, just wait until Lanzante comes up with a road-conversion package...

Back in 1995, McLaren's prototype #01R was wearing number 59. Having qualified ninth, its extra lighting equipment helped it through the rain to a victory thanks to brilliant drives by J.J. Lehto, Yannick Dalma and Masanori Sekiya. Today, it's the most valuable car in McLaren's possession.

Mach One Racing's Derek Bell, Justin Bell and Andy Wallace pushed the Harrods GTR, chassis #06R to third from a P13 start, allowing for Mario Andretti's Courage C34 to share the podium with the two McLaren teams. According to Justin Bell, he pushed the car so hard through the Mulsanne Straight that he actually left the track and hit the roundabout behind the barriers before continuing in the right direction. In the end, they were two laps down from J.J. Lehto's Ueno Clinic GTR.

The second F1 GTR made, #02R was run by British Gulf Racing wearing number 24 and finishing fourth after qualifying at P11. This car was driven by Ray Bellm, Mark Blundell and Maurizio Sandro Sala.

This new Senna GTR LM is heading to the United States.

The French Giroix Racing Team finished fifth with chassis #07R wearing the national colors and the number 50, driven by Jean-Denis Delétraz, Fabien Giroix and Olivier Grouillard. A proud moment for the locals, as well as Michelin, McLaren's tire supplier for the F1s.

Thirteenth overall is still a very high deed at Le Mans, so the all-French Société BBA Compétition team of Jean-Luc Maury-Laribiére, Hervé Poulain and Marc Sourd had a good run in chassis #05R. To replicate the looks of this unique "art car" known as The Caesar Car, MSO invested "thousands of hours of work" into its complex airbrush paintwork.

The resulting Senna GTR is also bound for America, wearing a flag the 1995 original does not. Luckily, the colors are still matching.

McLaren says each hand-painted livery took at least 800 hours to complete, while the 4.0-liter twin-turbo V8 has been tuned to produce 833 horsepower and 590 pound-feet of torque, some 19 horsepower more than "a regular" Senna GTR. These five 1995 homages also come with five-spoke OZ Racing wheels, gold-colored brake calipers and wishbones, a bespoke LM steering wheel featuring anodized gold gear shift paddles and control buttons, and foot pedals made from titanium nitride, not unlike the first quartz-powered Seiko Tuna diver (ref. 7549-7009) from 1978.

While looking at their "1 of 1" dedication plaques and the details of their 1995 Le Mans F1 GTR "twins" etched on the carbon fiber sills, all five Senna GTR LM owners will also get the opportunity to participate in a Le Mans circuit driving experience at the race weekend in 2021.

This weekend, Le Mans is a touch quieter.