Do You People Not Understand Why the Boat Is Here? 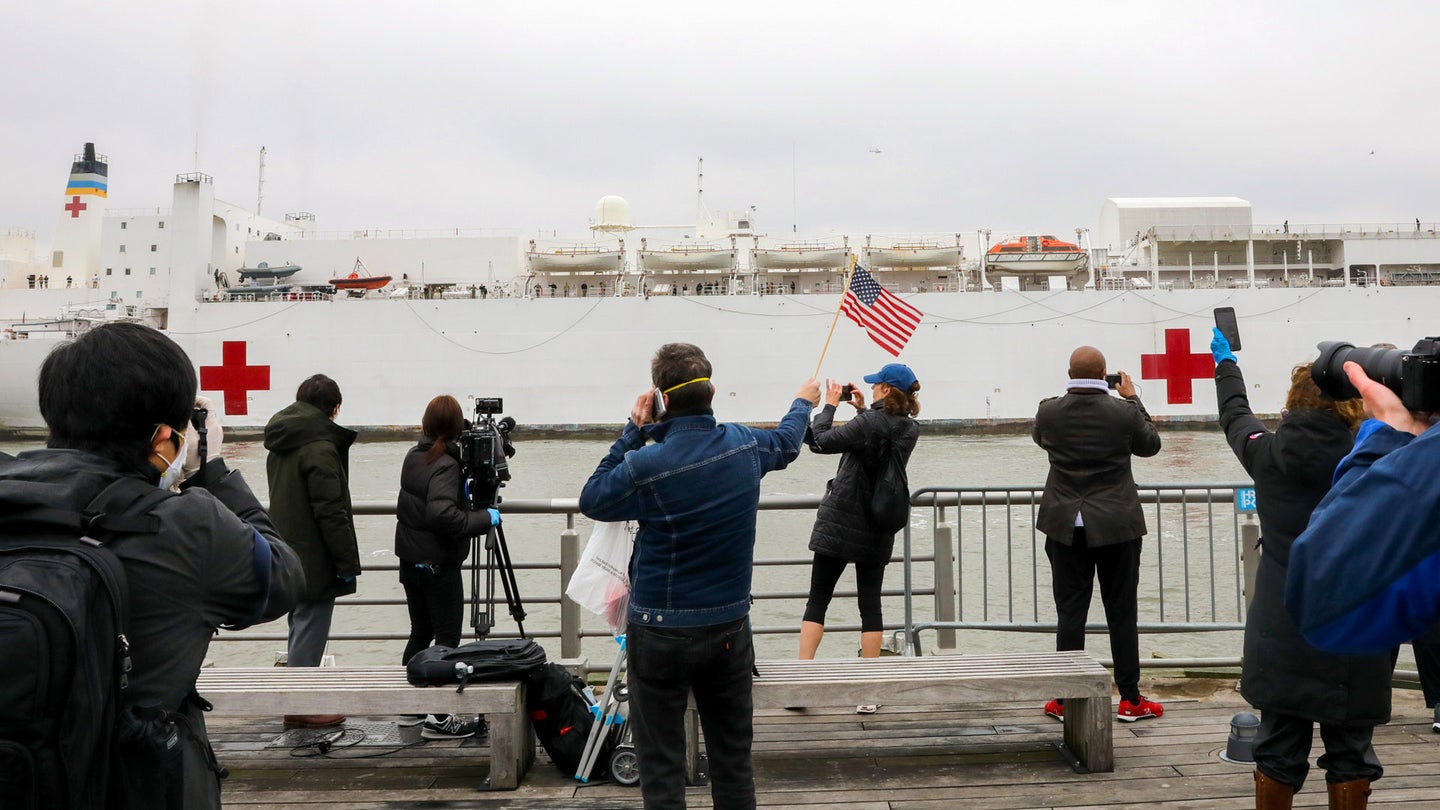 I don't know which sight is more ominous: the stark, all-white, 1,000-bed USNS Comfort hospital ship as it sailed into New York City's Pier 90 today to help with the coronavirus epidemic, or the throngs of people who ignored strict social distancing rules to gawk at it.

New York has become Ground Zero for the virus outbreak in the United States, with more than 1,200 dead across the state, thousands more needing urgent care and nightmarish horror stories coming out of the hospitals. As such, one of the U.S. Navy's two hospital ships has been dispatched to the city to provide emergency medical backup—not for coronavirus patients, but for people seeking other types of care. That way, it can give needed relief to the region's hospitals and, hopefully, slow the spread of the virus. (Our colleagues at The War Zone have an extensive deep dive into Comfort and its sister ship, Mercy.)

The best way to help contain the virus is to stay home and stay away from other people. That's why it was so depressing to see huge crowds gathered together—many in close proximity to one another—to get a glimpse of the ship today, as the New York Post and other outlets reported. Police in the area even had to disperse the crowds, according to the tabloid:

"Some waved American flags and others huddled against one another at the fence of the pier. Meanwhile, joggers out for a morning run brushed past the onlookers. At least a dozen NYPD cops stood by and initially did not disperse the bone-headed bystanders as they gathered and snapped cellphone photos of the ship pulling into the pier.

After members of the City Hall press corps tweeted about the throngs of people, Mayor Bill de Blasio’s communications team directed the NYPD to get the crowds to disperse."

Photos and tweets showing the situation can be found below. A few folks gathered at the Brooklyn Promenade to see the ship, but the worst offenders were along Manhattan's West Side Highway as the ship docked at the pier:

I hate to be the bearer of bad news, but waving an American flag doesn't hurt the virus. It is not afraid of the Stars and Stripes.

All of this begs the question: Do these people not understand why the boat is here? This isn't Fleet Week, New York. It's literally a matter of life and death.

But from the huge crowds enjoying sunny weekend picnics at Central Park to this, New Yorkers just don't seem to be taking this crisis seriously. Not even when their fellow citizens die by the dozens every day, or their doctors and nurses are pushed beyond their limits, or when our entire economy feels on the verge of collapsing.

It is an incredibly disheartening sight from a city that, after everything lately, should know better. And it won't be over until people decide to get smart and take care of each other. Stay away from crowds. Stay home, as much as you can. Don't look at the damn boat.

And wash your hands!

With New York going to war against coronavirus, the home of the auto show is on the front lines as an emergency hospital.