They’re lighter, stronger, and more resistant to heat, even at 15,000 RPM. 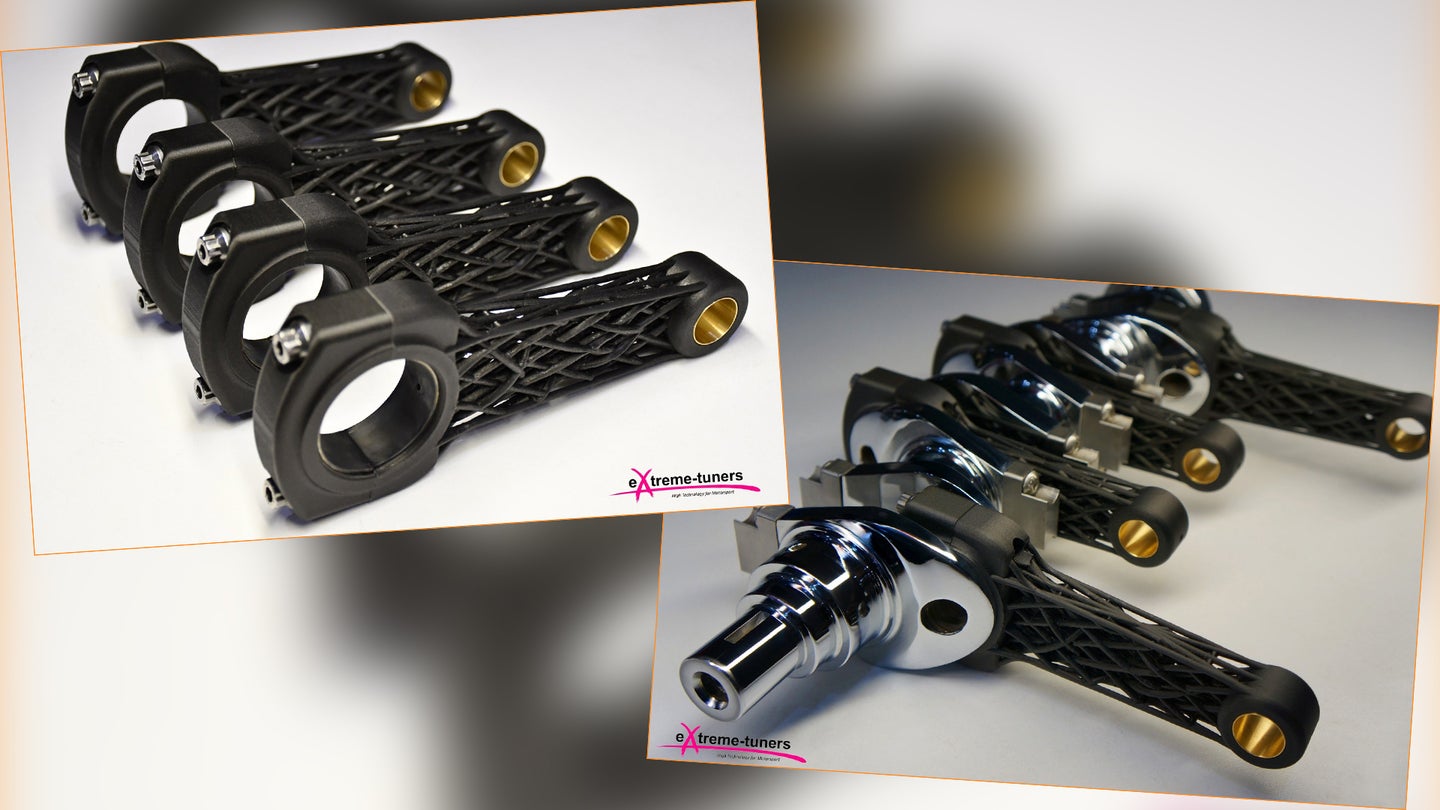 When it comes to carbon-composite materials, there's a bright future for increasingly innovative automotive applications. Not only can they be 3D-printed, but they're also technically lighter, stronger, and more resistant to fatigue from heat. Such characteristics theoretically make them ideal for use in parts such as carbon-ceramic brakes. But would you trust something other than good old fashioned metal when it comes to internal engine components? Could there be a future for carbon-composite in a standard-design piston power plan?

Some think so and, in fact, they’ve gone the distance to create these potentially groundbreaking parts for the aftermarket.

Several custom machine shops, such as Extreme Tuners, have taken to social media to tease it's latest potential engineering breakthrough: the carbon-composite connecting rod, which the company's been engineering for its Mitsubishi Lancer Evolution project. The con-rods they've been working on can supposedly withstand up to 3,000 horsepower and a redline of nearly 15,000 RPM, all while weighing nearly 10 times less than their steel counterparts and six times less than aluminum ones.

The connecting rod is the main rod that connects the crankshaft to the bottom of the piston in an internal combustion engine. Since they connect the engine’s main crankshaft with the cylinder’s piston head, which is what allows the piston to move up and down within the cylinder, they deal with a lot of tensile force and stress acting upon them during the intake, compression, power, and exhaust strokes. As a result, they’re often made of cast metals and alloys for strength and heat dissipation. That, however, makes them heavy and susceptible to failure in high-strung performance applications.

So what benefits would a carbon-composite rod provide?

Carbon-composite materials can be lighter and stronger than most alloy and cast metals. As a result, engines could theoretically benefit greatly from the usage of such composites in high-heat and high-stress situations. By making them lighter, that would result in a significant uptick in engine and throttle response since that would reduce the amount of reciprocating mass acting upon the crankshaft and the piston head. It could also allow more power, providing a huge advantage in the performance and even the fuel economy department.

Cast metal and alloy con-rods are already strong as is, but depending on how they’re manufactured, they can still fail. An alternative is to produce billet connecting rods, which means milling them out of a solid block of metal. However, it’s incredibly expensive, labor-intensive, and time-consuming.

Carbon-composite materials can be made stronger than typically used metals, which could give tuners more flexibility when trying to squeeze out more power. With the increased strength, they theoretically wouldn’t have to worry about bombing the engine by sending a con-rod through the side of the crankcase.

Carbon-composite materials are also said to be more resistant to heat, which may address some of the worry with metal fatigue incurred by overheating. That's why some high-end automakers use carbon-ceramic brakes. Not only are they stronger, but they also dissipate heat significantly better than steel rotors and thus, are more resistant to fade and resilient to abuse, such as track driving.

Extreme Tuners claim the ones they're working on are rated at up to 57,363 Newtons of piston force.

They Can Be 3D-Printed

Although carbon-composite materials are expensive because they’re still relatively new to the market, at least on a mass-production scale, they can be 3D-printed. This means the cost of making them could be brought down thanks to the ease of production that 3D-printing provides.

But there are still a lot of questions. Although carbon-composite materials can be stronger than metals and alloys, they still can be susceptible to failure if not manufactured properly, similarly to how some metals and alloys can suffer from structural integrity issues from poor casting or other metallurgy practices.

For instance, despite all the promise of carbon fiber or carbon fiber-based materials being stronger and lighter than some metals, like CFRPs or carbon-fiber-reinforced-plastics, they can still crack or shatter under inopportune circumstances.

So although carbon-composite connecting rods provide purpose in theory, they still need a bit of time and development to be perfected.