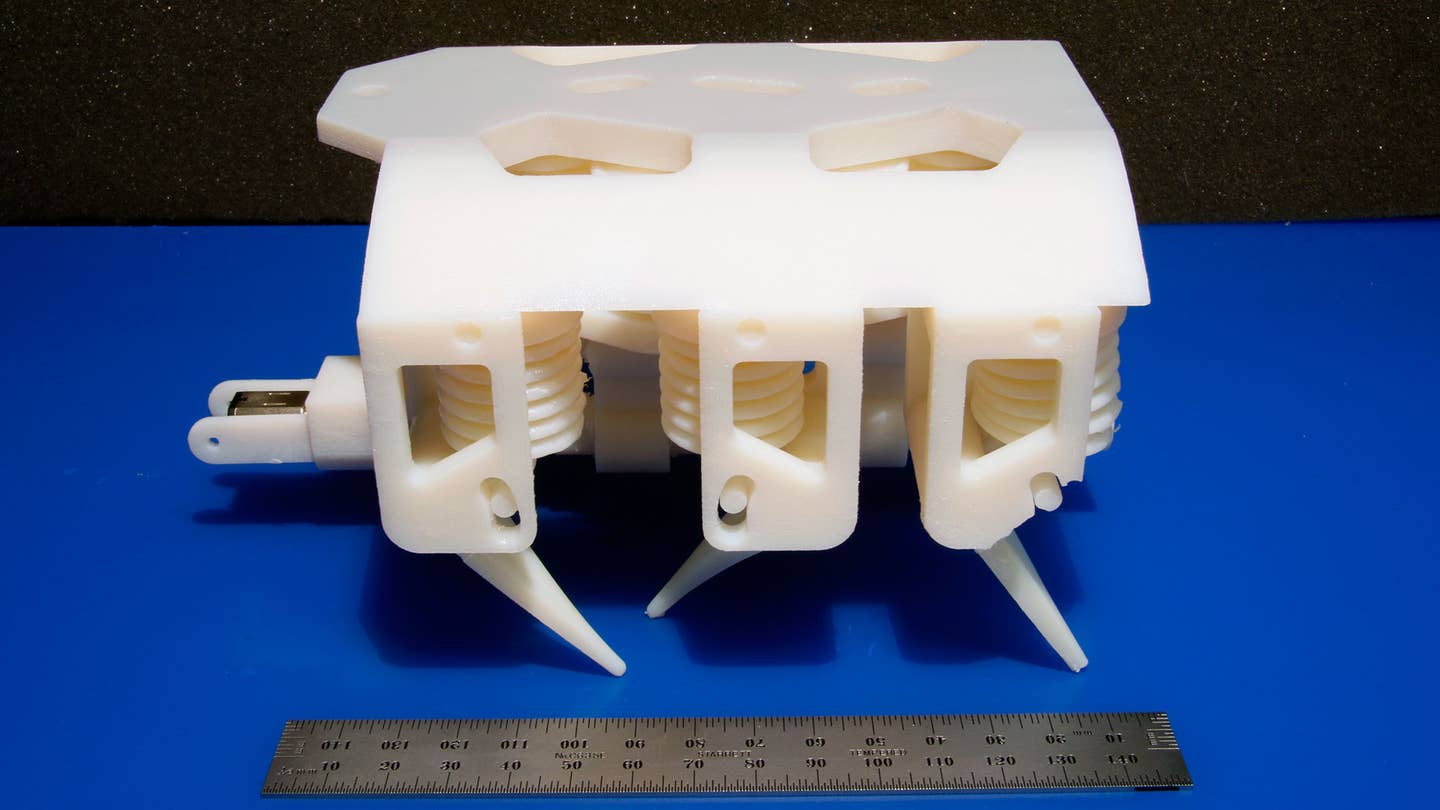 “Printable hydraulics” is the kind of phrase that makes you want to ask, “What’s that?”, but keeps your mouth shut, because you’re sure the explanation involves SAT words and YouTube videos. But if you want to know where your laser-eyed overlords will hail from, printable hydraulics hold the key now that MIT researchers have 3D printed a fully functional, hydraulically-powered robot in a single pass. The finished robot only needed a motor and a battery installed to start walking toward the door. This is a revolutionary advance on traditional robot building, a way out of manufacturing numerous individual parts and then assembling them after spending years and scads of money on the effort.

The researchers used a Stratasys Objet260 Connex inkjet 3D printer, which starts at $100,000 and can print eight different kinds of solids into a single object. Typically, the eight print heads deposit a tiny drop of material – 20 to 30 microns in diameter, about half as wide as a human hair – then cure it with ultraviolet light. The MIT scientists hacked the printer so that one of the heads printed a liquid, said to be the machine’s cleaning fluid, that wouldn’t harden in UV light. That allowed the machine to print a solid robot out of polyether ether ketone (PEEK), including the channels for hydraulic fluid at the same time as it squirted hydraulic liquid into the channels.

It took about 22 hours to finish the roughly six-inch, 1.5-pound hexapod. The DC motor turns a crankshaft that activates 12 hydraulic bellows pumps, those pumps move the fluid through the robot’s legs, converting fluid force into mechanical force. They also printed a gear pump, a fluid-actuated soft rubber gripper, and a fish with a hydraulically-powered tail to prove the method. The technique works on any multimaterial 3-D inkjet printer, but if you have a Stratasys Objet260 MIT provided a DIY guide to follow in their six-legged footsteps. MIT will present their work at this summer’s IEEE International Conference on Robotics and Automation (ICRA).

The breakthrough comes thanks to a $10 million grant from the National Science Foundation’s “Expeditions in Computing” initiative. The first fruits came in 2012 when an MIT team working with the University of Pennsylvania and Harvard created a six-legged robot that looked like transistorized origami, but it required two different kinds of printing techniques. Ultimately, where once the aim was for every home to have a dishwasher, the quest here is to “democratize access to robots” so anyone can design, program, and print a robot in a few hours.

MIT Professor and project leader Daniela Rus summed up our future First World Problem memes in saying, “If you can make complex robots really fast — print them like you print a piece of paper — you can imagine not having to worry so much about whether you lost your robot.”

An unexpected upside to giving up the wheel.