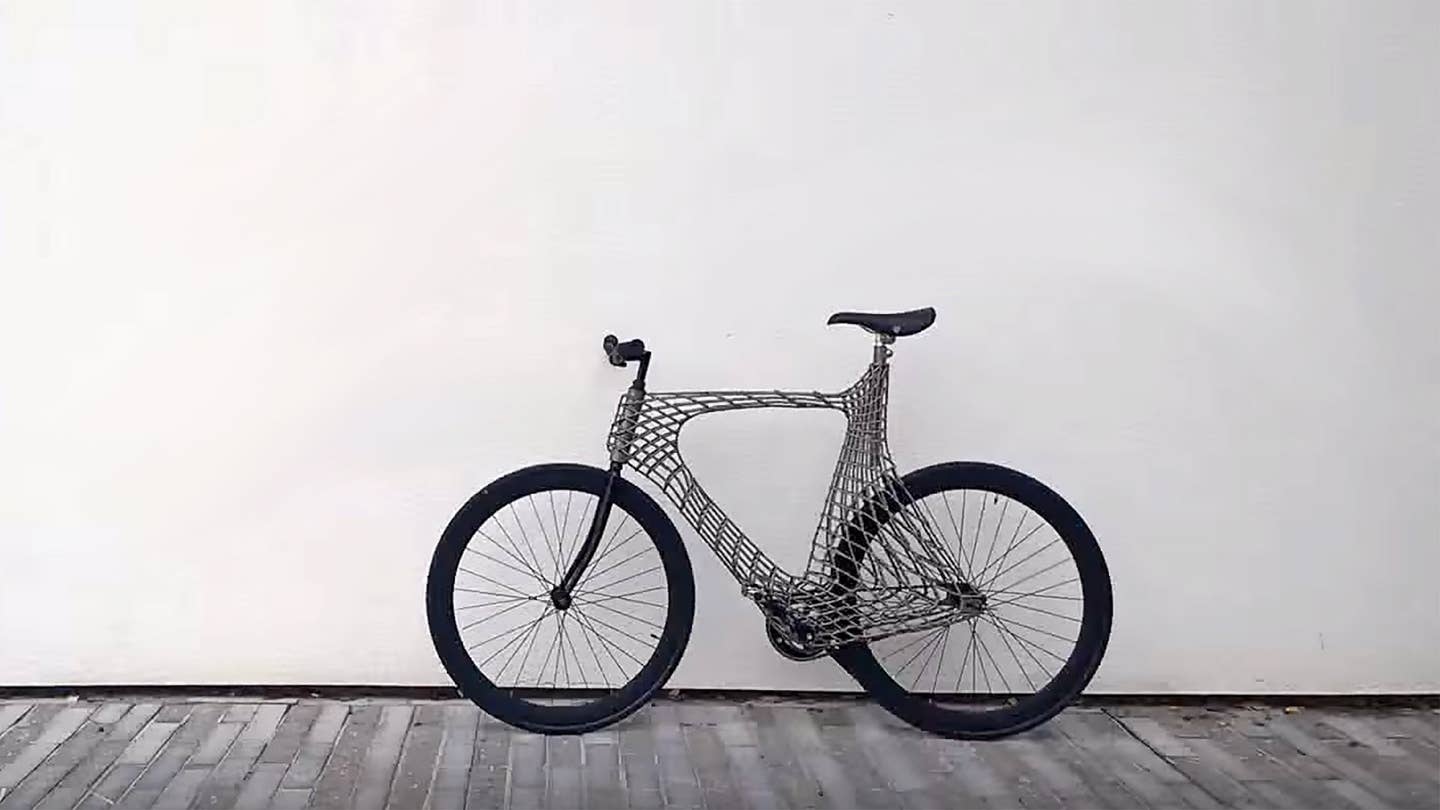 For most of us, 3D printing is still a technique on the fringes of industrial design and production. Globally, though, with so much R&D being devoted to the field, we'll almost certainly one day witness giant robots printing habitable buildings at construction sites—on Earth and other planets. You heard it here first.

But the future starts small, right? For now, we have an example of the next leap in 3D printing: a stainless steel bicycle penned by five students at the University of Delft in The Netherlands, produced by robots from Amsterdam company MX3D. Called the Arc Bicycle, its steel lattice frame was designed to minimize the amount of material while maximizing strength. It's built up around a few traditional components, like the head tube, bottom bracket, and rear dropouts. In true fixie style, it doesn’t have brakes; where this bike is going it doesn’t need them. And, in spite of how substantial it might look, the velocipede rings in at 26.5 pounds. No lightweight, sure, but a crackerjack first effort.

That's all possible because of MX3D’s computer-controlled, six-axis industrial robotic arm, as fitted with a special arc welding head. Instead of using welds to hold two pieces of metal together, the robotic arm lays one dollop of molten material atop another, building up lines and frameworks in any shape and any orientation. Gravity is irrelevant here; the arm's able to build an object that juts from a wall or descends from the ceiling, at any angle, without the need of supplementary support structures.

The welding head can dispense steel, stainless steel, bronze, copper, and aluminum in varying widths. For now, steel concoctions are printed in either five- or ten-millimeter lines. That'll likely change by the time MX3D begins its flagship project: 3D printing a 26-foot, steel pedestrian bridge across a canal in Amsterdam. The firm is working to have the walkable span, which will take about three months to print, completed in 2017. At which time the world’s first 3D metal printed bicycle will be able to ride across the world’s first 3D metal printed bridge.

Design: The Oscar Statuette Goes Back to its Roots

There’s more to the little guy than we thought.

Is Rolls-Royce’s Spirit of Ecstasy the Most Beautiful Hood Ornament?

Mountains may fall, rivers may jump their banks, but Rolls’ illustrious mascot will endure.