The latest required four fire brigades and 25 fighters to get the flames under control, some of which reportedly reached as high as 20 feet. 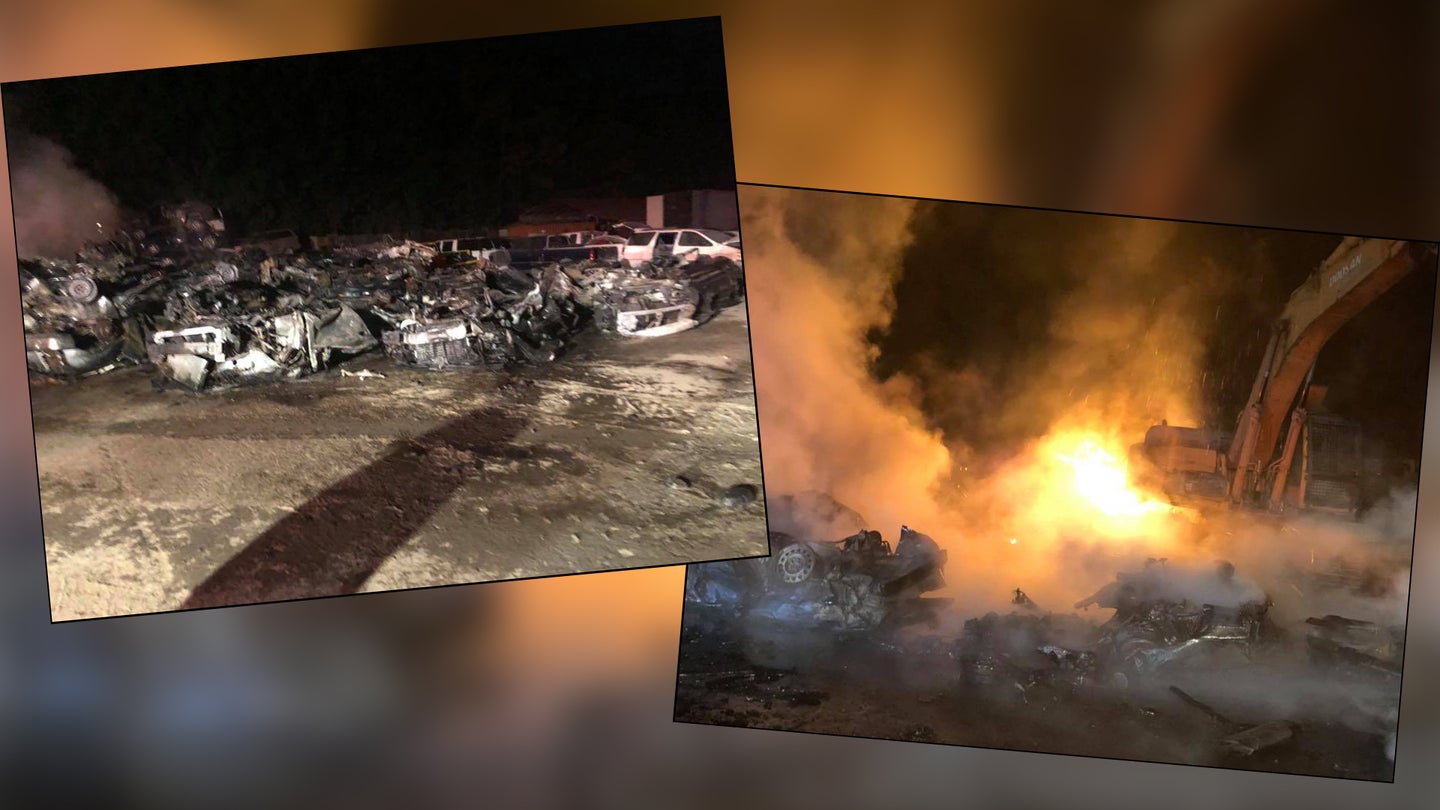 Fire crews responded to a massive blaze at a vehicle junkyard located in Ladson, South Carolina last weekend for the second time this year. A total of four departments and 25 firefighters battled the flames at Don’s Car Crushing facility after flames broke out during the early morning.

“We received a call of a car fire at about 12:15 this morning," C&B Fire Chief Joshua Woodall told local reporters. "Crews arrived on scene a few minutes later and found about 30 to 50 cars in a junk pile that were fully involved.”

When the fire was at its peak, flames reportedly shot as high as 20 feet and it took crews several hours to contain. At the time of writing, the cause of the fire is unknown.

“It could be as simple as leaving a battery in the vehicle, or it could’ve been something as simple as someone sneaking in and lighting them on fire,” Woodall continued in his interview.

Investigators interviewed the facility’s manager, who claimed that he doesn’t know how the fire started.

Woodall also said that it’s fairly common for his department to respond to these types of fires at vehicle shops—at least two to three times per year.

“You have other junkyards in the area fire departments are going back and forth to," he noted. "When you’re cutting cars open, you’ve got torches, you have open flames and such, you’re gonna have accidents and such. It is a common occurrence.”

Don’s Car Crushing also has a secondary facility just a few towns over in Holly Hill, where authorities say that site is at equally high risk for fires. From previous reports, the location in question at Royle Road had at least three fires happen over the past couple of years.

What’s also unknown is whether or not any electric vehicles were at the yard at the time of the incident. EVs have come under fire recently as the battery packs have posed flammability risks if punctured or ruptured—especially if they aren’t disposed of properly. So far, however, it doesn't seem like any EVs were involved. Crews are required to go through dedicated battery removal and disposal processes before crushing a vehicle, a process which looks to have been followed here.

"Unfortunately we do not have any information on the make or models of the vehicles that were on fire, the vehicles had already been crushed and were stacked," Woodall explained to The Drive via email.