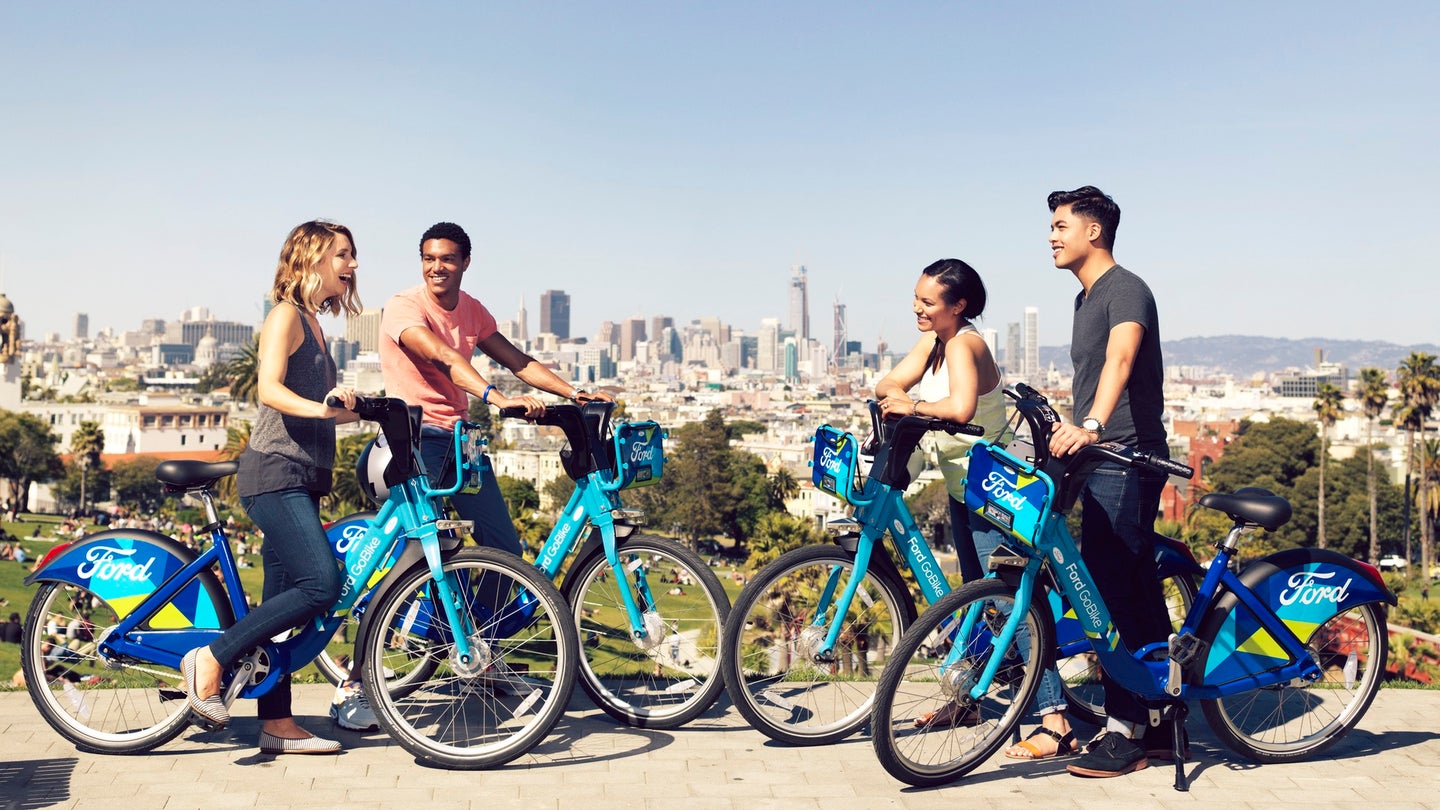 While rival General Motors focuses on car sharing, Ford is going for two wheels instead of four. The Blue Oval is teaming with bike-sharing specialist Motivate to launch a bike-share service in the San Francisco Bay Area.

Called GoBike, the Ford service will have 3,500 bicycles available in San Francisco, East Bay, and San Jose by the end of this summer. By the end of next year, Ford expects to have 546 GoBike stations and 7,000 bikes in operation. The automaker claims that will make GoBike the nation's second-largest bike-share program. So it looks like GoBike will be more than a publicity stunt or pilot program.

The bikes themselves feature continuously-variable hubs to allow a greater range of gearing, which should prove helpful on San Francisco's notoriously-hilly streets. Other notable features include puncture-resistant tires and motion-activated lights.

Riders can register for a membership at FordGoBike.com, or just walk up to one of GoBike's kiosks. GoBike is also linked to FordPass, the smartphone app Ford hopes to grow into an all-encompassing mobility-service enabler. FordPass already includes a digital wallet, and it lets owners remotely lock and unlock their cars through an embedded feature called Sync Connect.

Why is one of the world's largest automakers starting a bike-share service? While it still relies on high volumes of F-150 sales to stay solvent, Ford is trying to restyle itself as a more diversified company with interests beyond just car sales. In January, it turned its Detroit Auto Show press conference into a knockoff TED talk about mobility solutions in cities, and it's also running the Chariot shuttle service.

In addition to fitting with that narrative, GoBike makes good business sense for Ford. Between 2006 and 2015, bicycle usage in San Francisco increased by 184 percent, the company notes, citing data from the San Francisco Municipal Transportation Agency. Mobility services can also act against a bulwark against any decrease in car sales brought on by increased use of car sharing or ride sharing. Essentially, Ford wants to beat those potential new rivals at their own game.

But only time will tell how long Ford remains committed to this strategy. Will GoBike and Ford's other mobility projects really supplement car sales in a big way, or are they just part of a temporary fad?