Dockless scooter companies littered the city with thousands more of their wares for the huge downtown festival to woo new fans to their services. 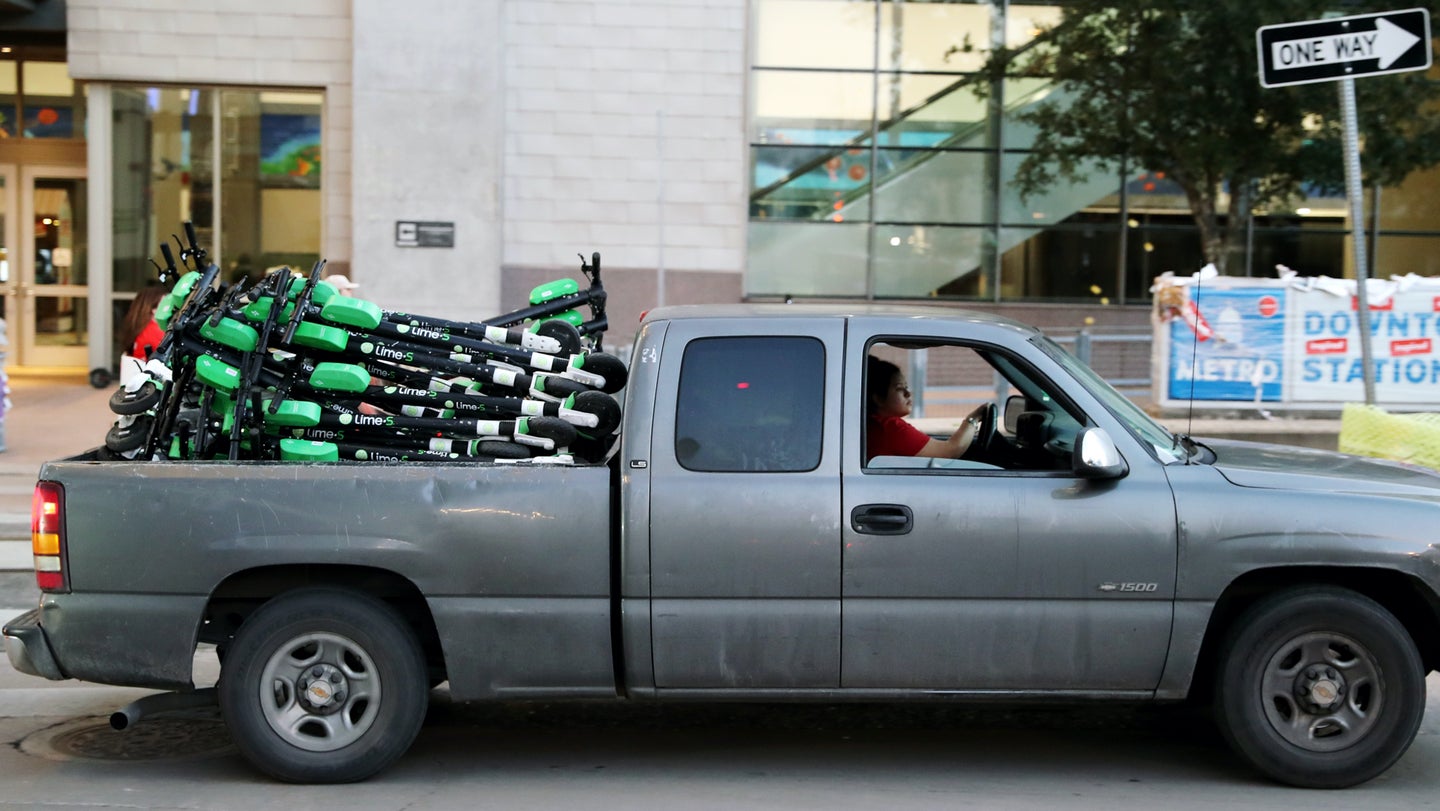 Austin's SXSW tech, music, and film mega-festival has a history of spreading new technologies, and this year's big winner is one that angry residents like myself already want to fire directly into the sun.

Dockless "micro-mobility" companies won a lot of fans among the thousands of attendees who flew in for the event, presumably because they don't have to live here with them all the time. The scooters allow riders to travel short distances faster than they'd be able to on foot and without the hassle of dealing with a car, which makes them popular in urban areas like the downtown neighborhoods SXSW engulfs for the event. Despite several no-scoot zones implemented for the festival, the companies' scooter fleets ballooned to meet demand accordingly, dropping thousands of extra scooters downtown.

For the companies, which include Bird, Lime, Jump, Spin, and Lyft, the festival is an easy way to reach new fans in new markets. Over 324,000 people came to SXSW from outside Texas in 2018 per the festival's own demographic data cited by CNBC. And they're backed by big money that's itching to grow, with Ford buying Spin in November for $100 million and Jump as a side-project of ride-hailing service Uber. The overall fleet of available dockless scooters in Austin ballooned to almost 9,000 for the week of the festival, per city data obtained by CNBC.

The extra availability clearly worked to draw new riders in as the apps used to access the scooters saw a significant increase in downloads during SXSW, reports Curbed.

Yet it's that growth that's become so problematic, with some

cities opting to ban e-scooters entirely due to the headaches they've already caused. I'll let Nick Statt from The Verge, who documented his own near-death festival experience of 15-ile-per-hour scooters getting way too close for comfort in a crosswalk, sum it up for me:

The scooters, nonexistent at last year’s festival, are everywhere in Austin this week, with thousands of vehicles concentrated in the roughly 1.5-square-mile area stretching from the Texas Capitol to the intersecting Colorado River. The result is attendees operating them at high speeds both through dense crowds on the sidewalk and among busy automobile street traffic. No one is wearing a helmet. And messy heaps of scooters are scattered across Austin’s sidewalks and public spaces.

Some of the astounding sights I’ve seen in the past few days include multiple vicious-looking wipeouts, a man cranking the accelerator and doing donuts in a crowded parking lot, and scooters littering the gutters of East 6th Street while throngs of people avoid tripping over them. At one point, I read that a man was found riding one down the shoulder of an Austin highway. Riders here are disregarding all manner of street signage and traffic lights; some people flagrantly speed the wrong way down streets.

This falls right in line with what I experience nearly every time I venture into a (formerly?) pedestrian-friendly area in Austin on a regular, non-festival basis: some scoot-dingus is inevitably going to buzz me on the sidewalk like I'm the tower from Top Gun, not an unprotected, vulnerable meatsack of a real, live, injurable human being. Because the number of scooters is up in town, the number of riders who disregard all traffic safety laws and leave them in problematic places are up, too.

Injuries have risen with scooters' popularity as well. While there isn't any data for SXSW yet, one ER nurse-in-training at St. David's Medical Center told local blog Hilltop Views that the hospital routinely saw around 50 people a week for scooter injuries.

Scooters, which are more compact, are the big draw for these companies, even over the bikes. Spin Chief Business Officer Ben Bear told CNBC that the take rate for their scooters was 10 times that of their bikes, even though Spin started off as a bike rental company. Perhaps it's the fact that there are frequent racks for bikes—and the societal expectation that you use said racks—that's made bikes both a non-issue as well as a non-starter. It's easier to find the scooters that everyone treats as park-anywhere devices.

The city of Austin implemented several bike- and scooter-free zones downtown ahead of SXSW, complete with parking boxes outside. While that's good that they at least realize that riders are hard to police in dense areas, it's the only noticeable thing they've done about problem riders. Step outside those areas, and it's still a free-for-all where you're likely to encounter riders on the sidewalk.

The festival also prompted one person to install "Clap Activated" stickers on some of the scooters found downtown during SXSW, presumably to catch out festival-goers who were new to the technology. To those of us who are tired of seeing our city look like Scooter Dystopia Hell World, it's the trolls who do things like sticker up the scooters and move poorly parked examples into trash cans who become the real heroes. Just please stop tossing them into the lake, as the chemicals in the batteries are harmful to wildlife, and I'm sure the fish hate the disruption as much as we do.