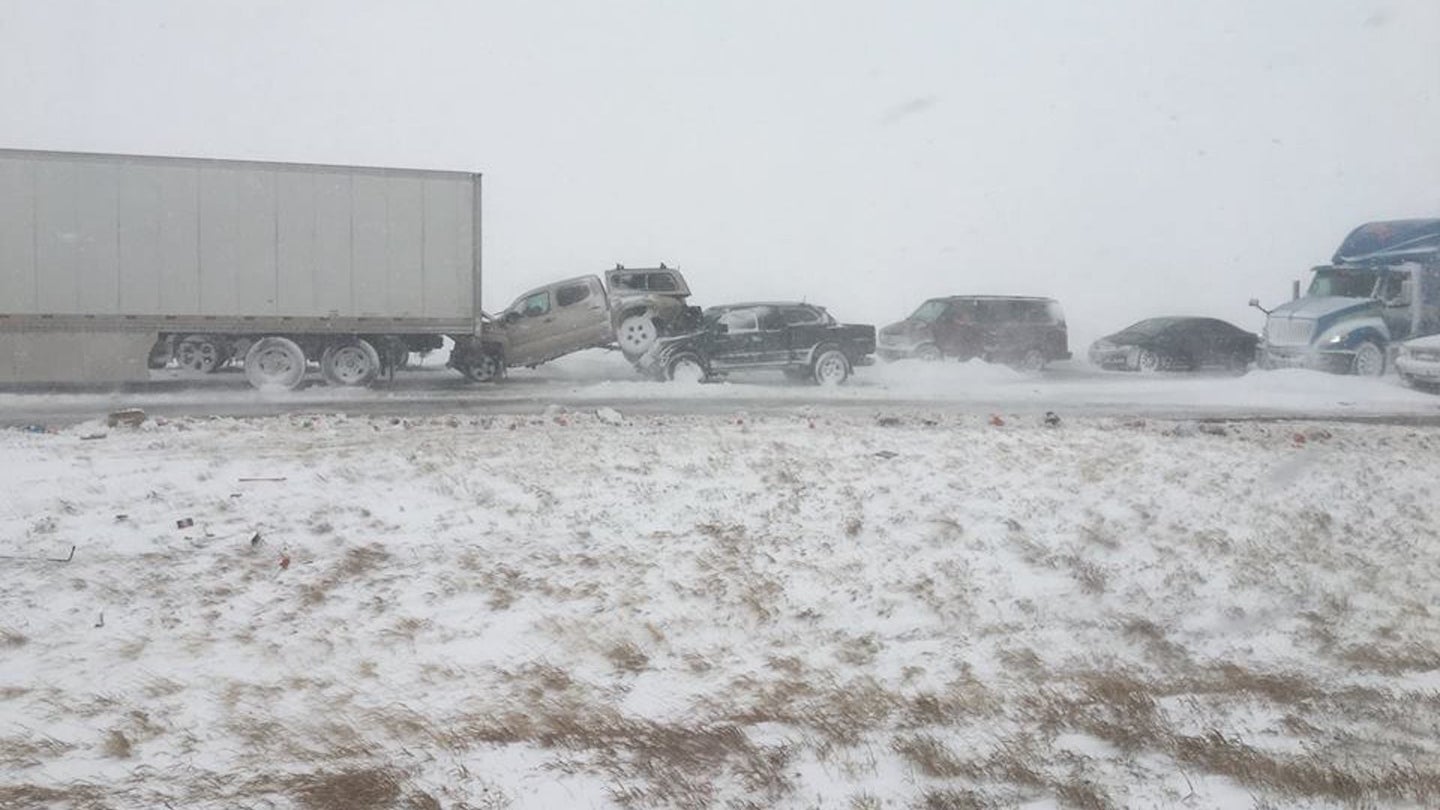 Blizzard conditions brought on by the countrywide "bomb cyclone" winter storm have been blamed for a colossal, 100-car interstate crash that occurred late Wednesday morning.

According to the Wellington Fire Protection District, a 911 call came in around 10:10 a.m. reporting a crash involving multiple vehicles on northbound Interstate 25. Authorities responded to find six vehicles stricken, but with temperature dropping and a sudden onset of heavy snow, road conditions worsened. The single accident gradually turned into a stretch of road littered with vehicles wrecked, disabled, or stuck as part of a plethora of multi-car accidents.

Though some travelers reportedly sustained serious injuries, no fatalities have been reported as a result of the chaos (the Colorado State Patrolman struck and killed Wednesday was on I-76, not I-25). The crash's severity and extent brought at least three counties' first responders into action, including those from Colorado's Weld and Larimer counties, along with unspecified support from Wyoming.

As a result of the crash and sustained dangerous weather conditions, Colorado's law enforcement closed northbound Interstate 25 to the Wyoming border overnight. This stretch of highway remained closed as of Thursday morning, and no ETA has been issued for its reopening. The Wellington Fire Protection District maintains a discouragement of road travel.

"Bomb cyclone" is the name given to a swirling cyclonic system that undergoes bombogenesis, or a rapid drop in pressure, which increases the storm's power. Coloradoan reports that this bomb cycle is roughly equal in strength to a Category 2 hurricane and has set an unofficial record for the lowest barometric (atmospheric) pressure ever recorded in Pueblo, Colorado: 975 millibars.

This cyclone's effects have been far-reaching with 78-mile-per-hour gusts recorded in Dallas, Texas, and gusts near 100 mph being recorded in New Mexico, where a freight train was blown off a bridge. Fortunately, no injuries were reported in this incident, but with the bomb cyclone moving into the Midwest and toward the East Coast on Thursday, the bomb cyclone's story isn't over yet.

The Drive would like to remind its readers that caution must be taken in all snowy or icy driving conditions, and that having winter tires is important—more so than even all-wheel-drive—in many climates. For when tires alone don't cut the mustard, also carry a winter survival kit in your vehicle.

Cold Weather Can Cut an Electric Car’s Range by More Than 40 Percent: Report

If you thought driving an electric car in the freezing cold hurts range, just wait until you turn on the heater.