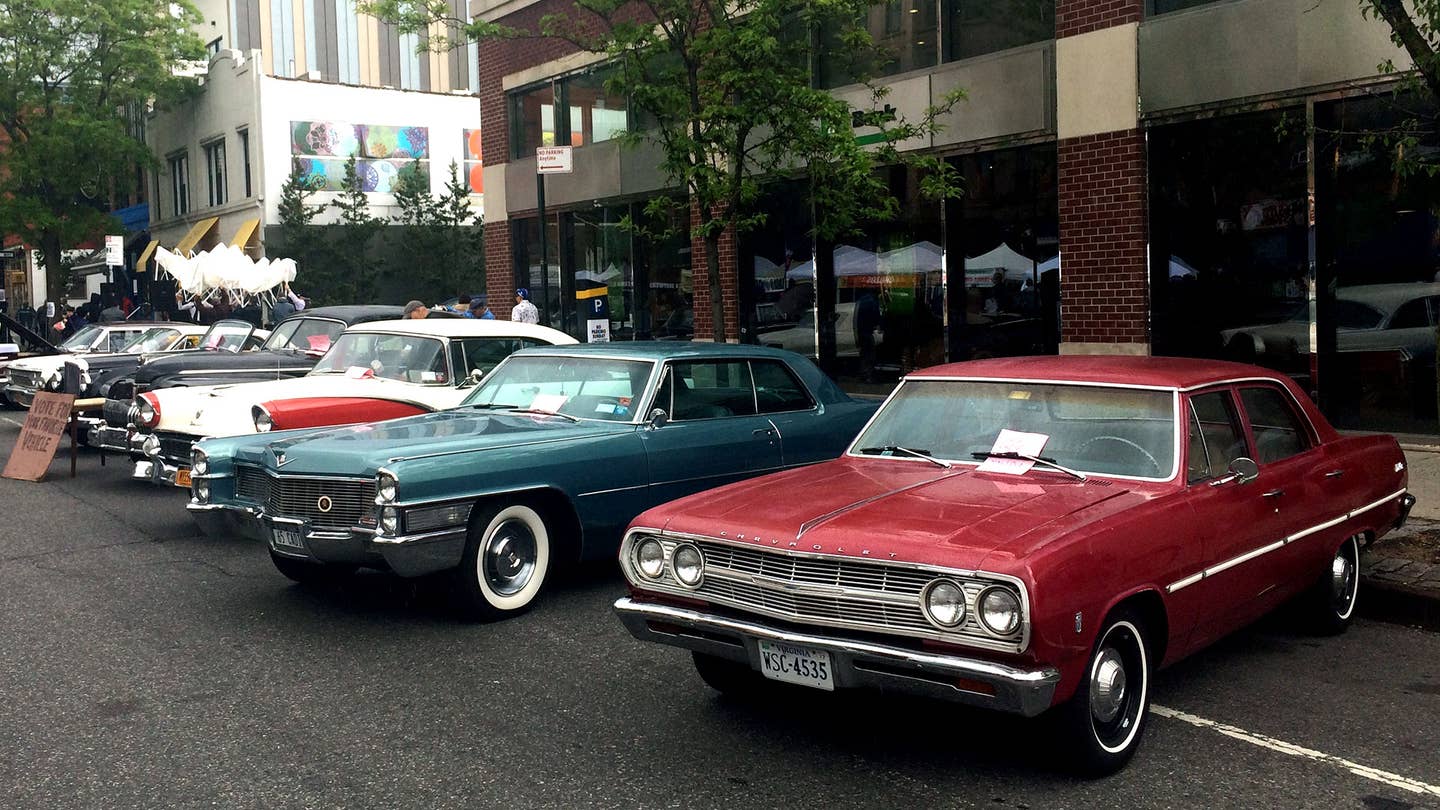 Along with the arrival of the warm season's lush green leaves, car enthusiasts who hide out during the winter have arrived in force. It's show season, and all those gearheads who were busy in the garage during the winter months have emerged into the spring sunshine to drive their shiny pride short distances, to be appreciated by the grubby-fingered masses.

Parked in neat rows, these shimmering monuments to America's (and Japan's and Italy's and...) automotive past often appear with models of themselves perched prominently upon their rear package shelves. Many have trophies from other shows propped up on richly-upholstered seats, testament to the preparedness, diligence and good planning of their owners.

But there are also those who, having spent most of the winter sitting around in warm, cozy dens drinking beer and pursuing other more leisurely activities, are now scrambling to get their old cars and trucks running in time for a little summer cruising. Although I can't say I spent the winter in a drunken stupor, I am one of the unfortunate many who must work on cars out of doors, meaning I prefer not to when the mercury dips below 40 degrees.

That doesn't mean I won't – regardless of preparedness – present a car at a local street show. Last summer, doing so brought me face-to-face with a racist cop or two. It's not what you're thinking. These officers of the law did nothing to discriminate against me or any other human, it was my Japanese car they objected to.

"You can't come in here with that," one of them bellowed at me as I pulled across a police barricade at the designated show entry point in a freshly-polished 1987 Subaru GL wagon. "This is for parade cars only.

I protested, pointing out that not only was I a member of the local antique car club, but that this car, at nearly 30 years old, qualified as a classic. He was unmoved. The same thing happened at another show in Bensonhurst, Brooklyn a few weeks later. My poor, albeit shiny little Subie got no love, from cops or people voting for the cars they liked best. (I was lucky enough to be within earshot of the show's organizer in that dispute, and managed to sneak in.)

The reason I had entered it – other than the fact that it is a classic – was because I hadn't finished working on my classic American car, the one that cops would have smiled at and which would have caused the eyes of Vietnam vets to twinkle behind opaque aviator shades as they said, "Oh look, honey, we had one of those when the kids were born."

This year is different. Show season is here and I'm armed with an appropriate car: a red 1965 Chevrolet Malibu sedan. It's not shiny, the motor emits an unhealthy-sounding rattling sound and the seats look like they were sourced from one of those buses people ride between remote mountain villages in Bolivia. But it's the sort of car that reminds people of that mythical time when America was great, or something like that.

Last week, I took the Malibu to a street fair in Brooklyn, parking it next to a '65 Cadillac and an even older Chevy Impala. Two guys who looked to be in their mid-'60s sat in lawn chairs behind their parked cars, chit-chatting and sipping wine out of plastic cups. People shuffled by with their children and cooed over the glittering Ameri-barges.

"Look honey, paw paw had one of these when mommy was a little girl," someone would say.

"Man, how'd you get this thing so clean," another would blurt out.

And so on. One of the guys – the one wearing a red "Make America Great Again" hat – scared off a few of his car's admirers when he launched into unprovoked political commiserations.

"Hey, nice car," an admirer said, a dreamlike smile framed by his long, wavy gray hair. "I had one of these in high school, but it wasn't this nice."

"I hope you're not voting for Hillary," the Great American shot back, his eyes squinting from beneath the hat's flat bill.

He said a few other things about the former Secretary of State and her crimes against humanity. The long-hair looked uneasy and sort of side-stepped away, a wan smile still peaking out from the gray cascade.

Some people stopped to look at my car, too, but most didn't stay long.

"Jeez, this is just like the one I had in high school, ripped seats, dull paint and all," one fellow said to his buddy, unaware that I was standing nearby. "I bet it smells like marijuana and stale beer in there."

Children were the only ones who weren't so jaded. A little girl asked her mother in Spanish if she could sit on the white bench seat. I knew enough Spanish to assent before her mom could say, "No, you'll get bed bugs in that thing." Mamita took some nice photos of her daughter in the classic small-child-on-oversized-seat pose. Adorable.

At some point, it was time to tally the votes. I'd heard another kid telling his mom that he liked the red Chevy, and thought it boded well for my overall score. But there were some heavy hitters there – among them a '56 Bentley, a '46 DeSoto and the aforementioned GM products. I wasn't expecting great grades for the Malibu.

The votes were tallied on the back of a manila envelope in the way prisoners used to scratch the days of their sentences into old stone walls. There were a whole lot of scratches for the Bentley. The Cadillac and an old Ford Galaxie did pretty well, too. A beat-up Ford Mustang with a not-so-popular 6-cylinder engine option had scored three votes. My heart sank as my eyes migrated to the bottom of the page. One vote. The Chevy had gotten a solitary vote, probably from the kid I'd been lucky enough to hear saying he liked it.

Trophies were passed out. The guy with the DeSoto got one, but wasn't interested in a third place trophy. He looked over at me. I was easily the youngest participant in the show, and I think he felt pity for me.

"Here Ben, you take it," he said. "We'll give you an award for having the most hair."

And that's I scored my first car show trophy. Still, it wasn't so bad. Where else would I have been able to sit around drinking beer in the front seat of a '46 DeSoto, chatting with passersby and bullshitting with other car nuts?

Do you have a car that's more than 25 years old? Get out there and show it. You may not win anything, but what have you got to lose? You may even make a new friend or two. If they say your car isn't a classic, don't believe them! The most interesting (and sometimes weirdest) people I've met at shows had the most unlikely cars. Once, I saw a '79 Ford Grenada that had been painted red with a brush. Another guy was showing off his late-Eighties Merkur. Neither of them gave a shit about what people think, and neither should you. Dust off that rusty '89 Honda Civic and sign up. You're guaranteed to hear at least one person say, "Remember when we had one of those?"