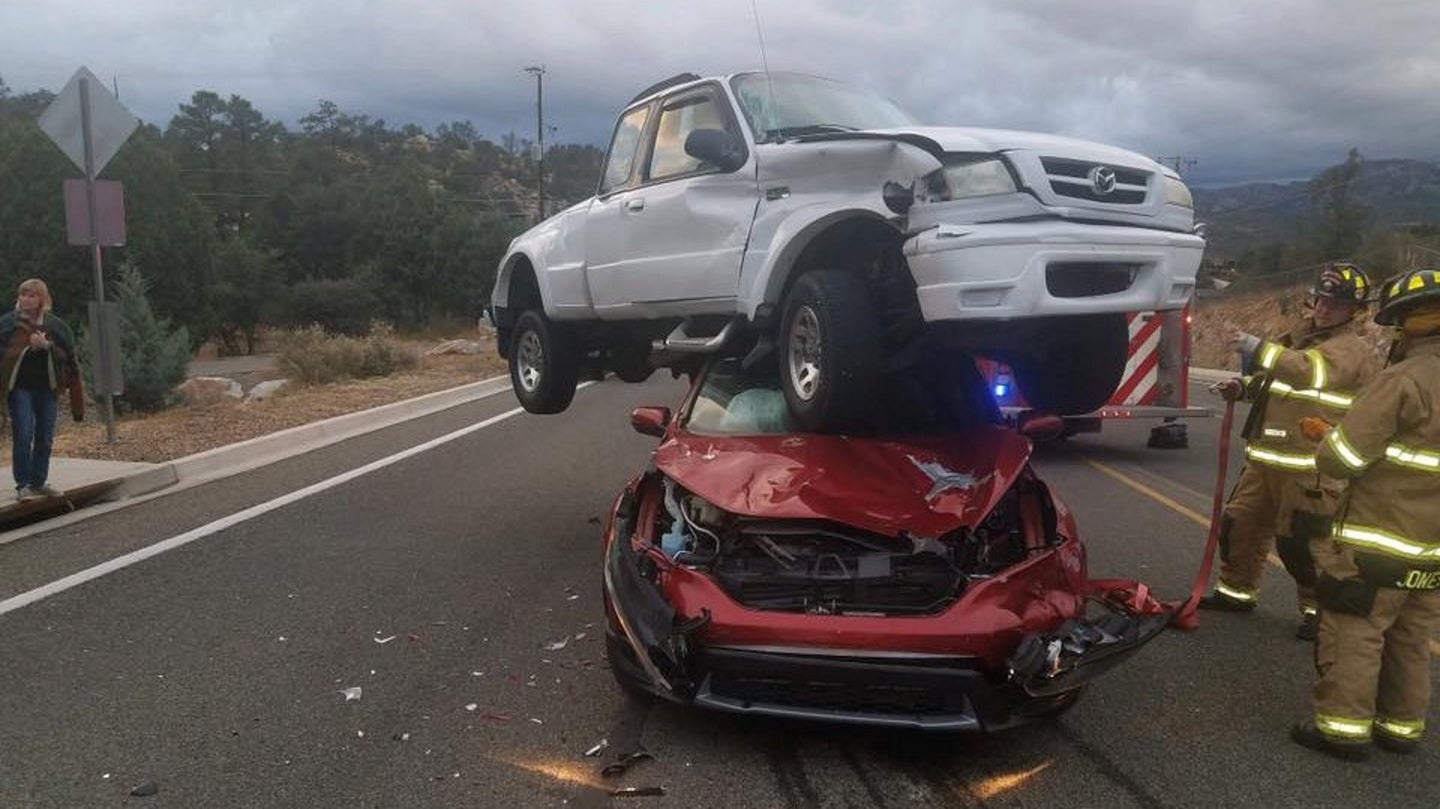 Here’s a car accident that probably wasn’t planned for with Honda Sensing. A three-car accident in Arizona Sunday shows a truck on top of another vehicle. The Prescott Fire Department said that indicated nobody involved with the crash was injured. Officials on the scene indicated seat belts were worn by all parties.

In the three-car accident, a truck made contact with a white Mazda B-Series pickup which caused it to swerve into oncoming traffic on Williamson Valley Road in Yavapai County, Arizona. The Mazda proceeded to hit a black car which made it flip into the air and land right on top of a Honda CR-V (the sheriff’s office’s report on Facebook calls it a “red sedan,” but we’re pretty darn sure that’s a CR-V). The images of the crash don’t look pretty, but to the pleasant surprise of the firefighters who arrived on the scene, there were zero deaths and even zero injuries reported from the accident.

So you can literally drop a Mazda B-Series on top of a Honda CR-V without anyone getting hurt (although, we don’t recommend this). The Yavapai County Sheriff’s Office credits everyone involved with wearing their seat belts for part of the reason there were no injuries, but we think there was a lot more car safety innovation at play than just seat belts.

Major advancements in automotive safety throughout the years contributed to the miraculous outcome of this crash. It’s easy for us to complain about big, chunky pillars in modern cars which frame the windows and windshield making them difficult to see out of, but accidents like this are exactly why they exist. When a car can support more than its own weight on its roof, it’s more likely to be able to hold up a whole other car keeping its occupants safe, which appears to be what's happening in this accident. Although there’s no official word on whether it was the seat belts, the pillars, or a combination of the two.

You might think you don’t need the safety technology and engineering that’s baked into modern cars, but you never know when a truck is going to fly through the air and land on top of your car—and we certainly hope you don’t have to ever go through that experience.

Current safety standards for automakers were written when a car couldn’t function without a driver. Times are changing.