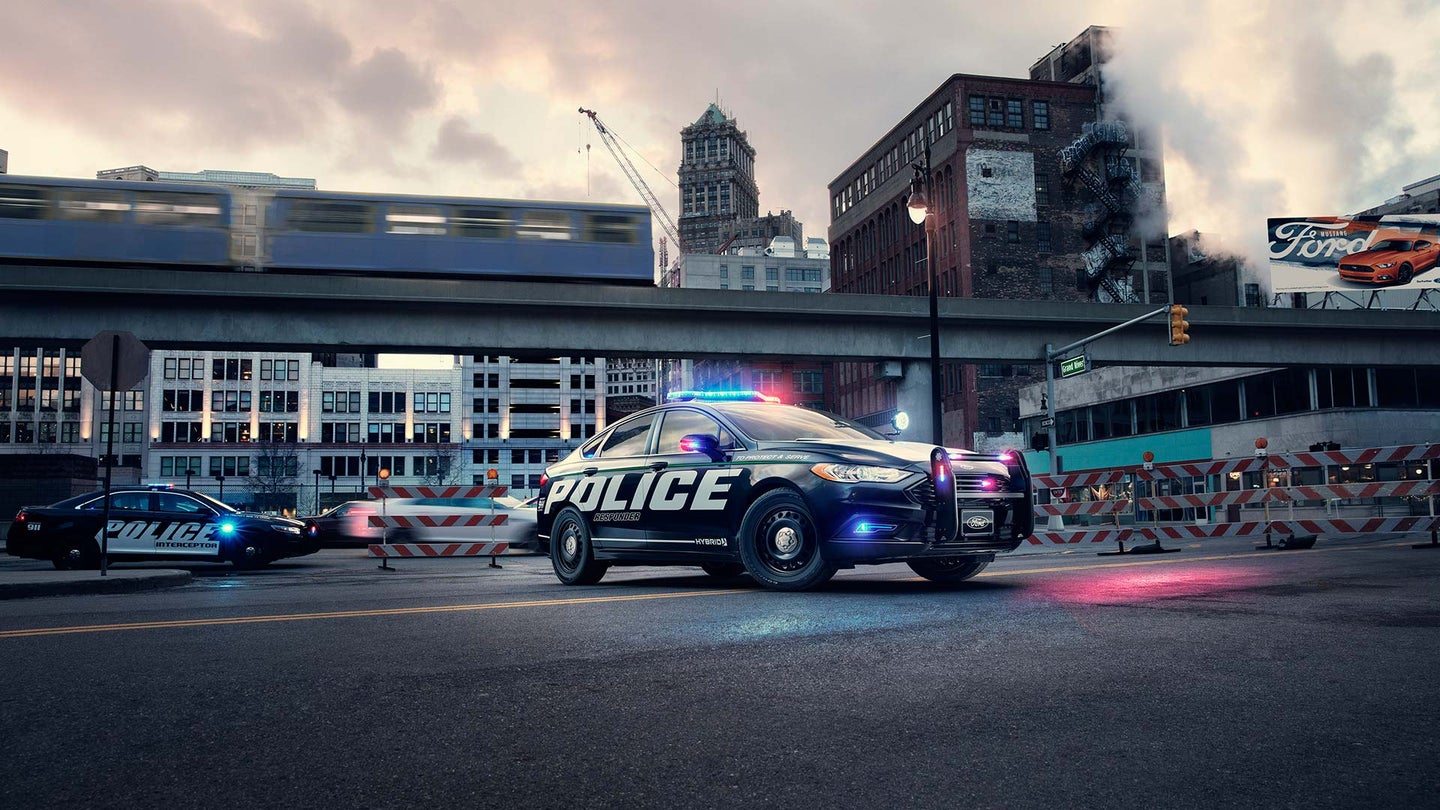 Electric cars are quiet—so quiet that lawmakers are concerned pedestrians may not hear them coming. So in 2010, Congress passed a bill mandating that all electric cars (and hybrids) emit noises at speeds up to 19 miles per hour. After years in legal limbo, the rule is finally set to take effect in September 2020. However, it appears Ford inquired about a partial exemption for police cars.

In the text of the final rule issued by the National Highway Traffic Safety Administration this past February, the agency said it would respond to a comment by Ford "regarding the legality of equipping certain vehicles used for security purposes with a means of turning off the required pedestrian alert sound," reports The Verge.

Ford would not discuss the matter, but it's conceivable that police could benefit from an off switch for the noisemaking devices. Such equipment could give away officers' position when they want to remain unseen and unheard. Given the number of police cars that end up on the civilian market, Ford would likely have had to devise a way to disable the off switch as well. The specifics of Ford's query are unclear, as the full text of the comment was redacted at the company's request because it contains allegedly confidential information.

It's clear to see why Ford would make this request. The Blue Oval competes with Detroit rivals General Motors and Fiat Chrysler Automobiles just as aggressively in the police-car market as it does in the civilian sector. Of the three, Ford is the only one to seriously pursue electrified police cars. The automaker currently offers Fusion hybrid and plug-in hybrid police cars, as well as a hybrid model based on the Explorer.

Apparently, the NHTSA never seriously considered Ford's question. The reference to Ford's comment was "inadvertently left in" the final text, an NHTSA representative told The Verge. Ford submitted its assertion after the public comment period for the noisemaker rule ended in October 2015, and the agency felt that addressing it would delay issuance of the final rule. The reference to the comment in the final text of the rule was reportedly a mistake.

The noisemaker rule has proven difficult to implement. Congress passed the bill mandating it in 2010, but the rulemaking process dragged on for seven years. Automakers called the rule unnecessary, but NHTSA garnered support from advocacy groups like the American Council for the Blind. NHTSA has said noisemakers could prevent up to 2,400 pedestrian deaths a year.

The rule was finalized in December 2017, and automakers were given until September 2019 to equip their electric cars and hybrids with the required devices. That deadline was subsequently pushed back to September 2020, or roughly a decade after the original bill was passed. Automaker trade groups successfully lobbied for the latest delay, claiming automakers needed to extra time to comply with the rule.