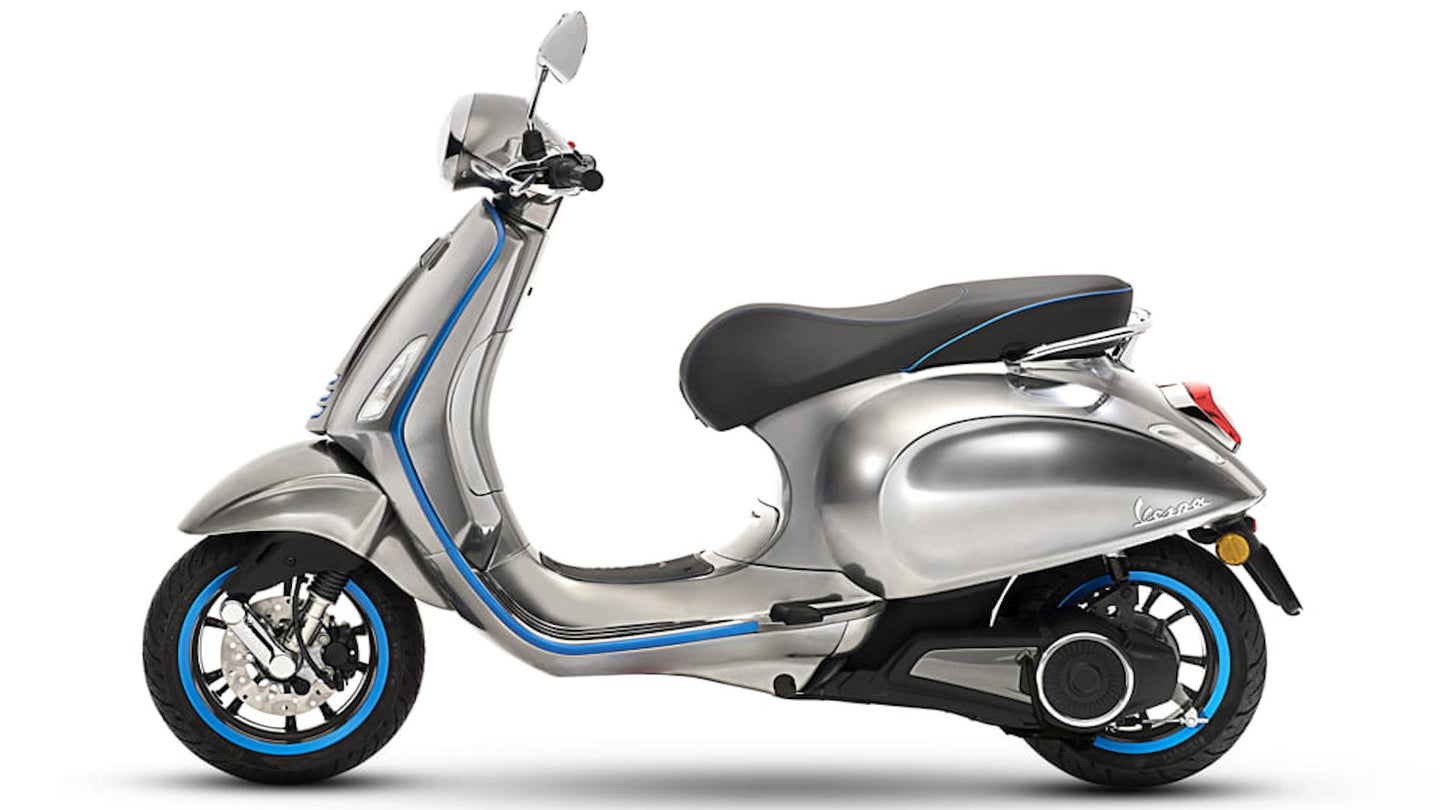 Vespa's first fully electric scooter, the Elettrica, will go into production in September and be available for purchase in the United States at the beginning of 2019. The announcement was made by Piaggio, the parent company of the Italian scooter manufacturer.

According to the statement, the Elettrica has a lithium battery that's designed to deliver 60 miles of range per single charge and can be recharged in just four hours. Piaggio also claims that the battery should last approximately 1,000 charge cycles, which is roughly 31,000 to 43,000 miles. The maximum speed for the Elettrica wasn't confirmed, but an alleged "Eco" mode will limit its top speed in order to preserve energy.

The performance of the electrified Italian will be similar to that of a standard 50cc scooter. Its electric motor will produce 2.7 horsepower of continuous power and will peak of 5.4 horsepower under heavy acceleration. The motor also has a torque rating of over 148 pound-feet of torque. It's not clear where most electrical components will be sourced from, but Piaggio said the Elettrica will be assembled at the Pontedera plant in the province of Pisa, where the first-ever Vespa rolled off the assembly line.

In the future, the Elettrica will benefit from artificial intelligence and various levels of semi-autonomous features similar to the ones employed by Tesla.

“Vespa Elettrica will be ready to be fitted out in the near future with solutions currently being developed for Gita, the robot currently on the drawing board at Piaggio Fast Forward in Boston,” read the company's press release. “Such as artificial intelligence systems are both adaptive and responsive to all human input.”

“They will be aware of people and other vehicles operating in the vicinity, extend the operator’s ability to sense potential perils and opportunities, and provide real-time mapping and traffic data that contributes to improving the design of transportation infrastructures in cities.”

After being popular methods of transportation in Europe and other parts of the world for decades, Vespas and other sit-down scooters have been gaining popularity in the United States, where the desire for electric vehicles has also grown in recent years—and so has the demand.

Although the price of the Vespa Elettrica wasn't announced, Piaggio claims that the cost “will be aligned to the high end of the Vespa range currently on the market." Most Vespa models in the United States hover around $7,000, with some special editions costing as much as $10,000.